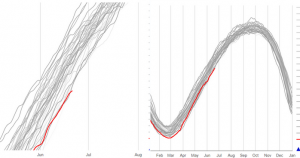 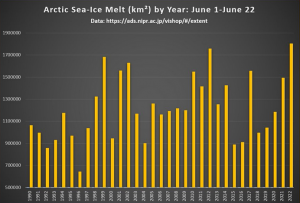 “This year’s Arctic sea-ice melt for the month of June ranks #1 overall through June 22, overtaking 2012 in the last two days, with 1999 close behind.

“Ongoing Arctic heatwave breaks June record in Norilsk, Russia and ties its all-time (any month) record of +32°C (89.6°F). Norilsk is about 300 km north of the Arctic Circle.” 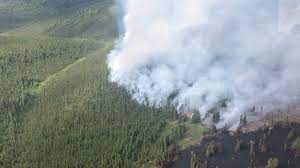 “A record number of acres have burned this month in Alaska, forcing Indigenous people from their homes, compromising air quality and stretching firefighting resources thin. More than 1 million acres have gone up in flames already…” 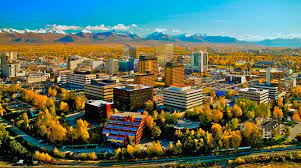 “Warmest start to summer on record continues across Southcentral Alaska.

“For the eighth day this year, Anchorage reached 75° Wednesday [23.9C], which has only happened one other time in recorded history this early in the season… this heat and dry weather is here to stay. We’ll likely see another eight 70° days, finishing out the month of June close to 10° above normal.” 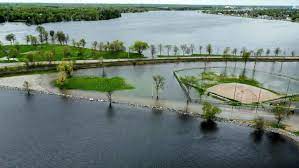 “‘Almost a perfect storm’: How this northern town [NW Ontario] is battling floods.

“Fort Frances is one of 24 communities in northwestern Ontario that have declared a state of emergency due to spring flooding since March 30. The town of nearly 8,000 people sits on the shore of Rainy River; a small tributary runs through town toward Rainy Lake…” 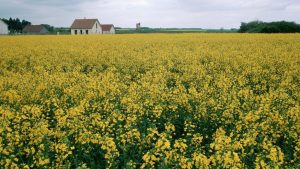 “US could run out of mustard because of climate change… 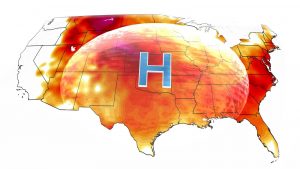 “23rd June most of US is under heat wave conditions, especially in the SE.

“June weather in Austin on Thursday delivered the month’s 17th day of triple-digit temperatures, putting the month on a record-setting path.

“Not only did Thursday’s high of 104 tie the daily heat record set in 2017, but if the current National Weather Service extended forecast holds up, the city will likely record as many 20 days of 100-degree temperature readings in June, which would match the June record set in 2008.” 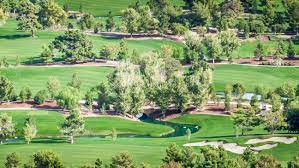 “Las Vegas is ripping up millions of square feet of grass – including greenery along the iconic strip – as the city struggles with a decades-long drought made worse by climate change… levels [at Lake Mead] have dropped to an all-time low due to a sustained drought exacerbated by climate change.” 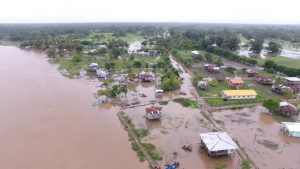 “Mosquitia [Honduras] in emergency and calamity due to floods…

“the congresswoman of the Liberal Party, Erika Urtecho, declared that… the rains will continue… “”We have been with incessant rains, some communities in the department of Gracias a Dios are flooded, we are worried that a new tropical wave will be entering. There are evacuations of many affected families,” she said.” 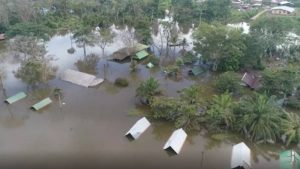 “Last month, Suriname President Chan Santokhi declared seven of the country’s 10 districts to be disaster areas and asked international partners for help… Nearby Venezuela, which has been ravaged by years of economic crisis, nonetheless delivered 40,000 tons of goods, including food and medicines, and distribution will begin this week.” 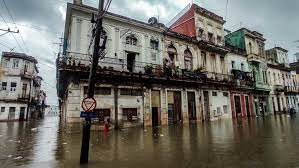 “The first storm of the 2022 hurricane season, which hit Cuba in mid-June, collapsed or damaged dozens of homes in the capital that were already in poor condition, tearing off pieces of roof, balconies and facades. That highlighted one of Cuba’s main social problems: a shortage of quality housing…” 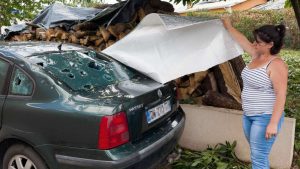 “Senator Fabien Genet said the extreme weather had caused ‘enormous damage’. ‘We have just had a storm of unprecedented violence with hailstones of a size that has never been seen in the memory of the inhabitants,’ he told The Times.” 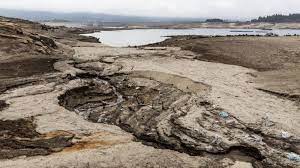 “Last month was the hottest and driest month of May in the last 92 years … and rainfall was much lower than expected for the time of year… Very sadly this news doesn’t surprise me at all after the disastrous lack of rainfall we had in autumn, winter and spring. It is terrible news for farmers and for wildlife!” 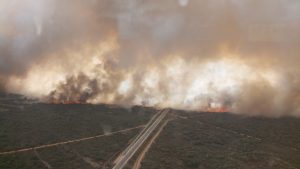 “Fears for wolf population after ‘catastrophic’ wildfire in Spain.

“The Spanish government has declared the Sierra de la Culebra mountain range in Zamora province a catastrophe zone after a fire destroyed 30,000 hectares (74,000 acres) of woodland, raising fears for the future of the local wolf population.” 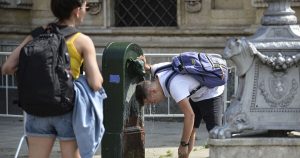 “Italy’s heatwave to last another week and get even hotter, say forecasts.

“The Italian health ministry has issued red alerts for extreme heat on Friday and Saturday in and around the cities of Bologna, Campobasso, Florence, and Pescara… Weather forecasters warn that the heatwave is set to continue until the end of the month.” 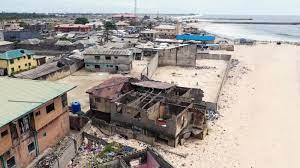 “Nigeria’s homes are vanishing into the sea from climate change.

“When an ocean surge washed away Mureni Sanni Alakija’s house in 2011, he took a loan to build a home farther away. But that too is no longer safe as the sea creeps inland in Okun Alfa, a neighbourhood in Nigeria’s commercial capital Lagos.” 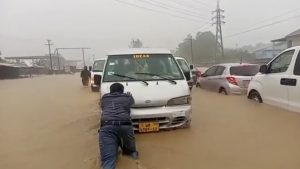 “The long hours of torrential rains that hit the Twin city of the Western Region have rendered many homeless. The rain also covered the surfaces of many major roads including the Ketan to Nkroful Junction, Kansaworodo, vodafone, Paa Grant and the Apollo highway.” 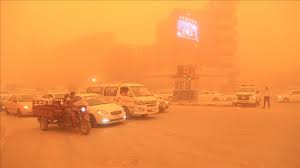 “Iraq’s sandstorms are threatening life in the Fertile Crescent.

“The storms cause fatalities around the country and long-term respiratory illnesses by inhaling sand and dust. This year, over ten thousand people were hospitalized, with at least five recorded deaths from the sandstorms that swept through Iraq. As a result of these dire conditions, this year, the Iraqi government shut down for many ministerial and provincial workers.” 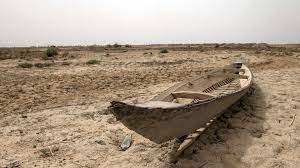 “Iraqi planting area reduced by 50% due to water scarcity.

“The Iraqi Ministry of Water Resources revealed on Wednesday that water scarcity caused 50 percent reduction in the planting area in Iraq, according a statement of the National Center for Water Resources Management cited by The Iraqi News Agency.” 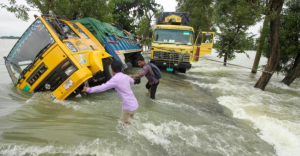 “The worst floods in Bangladesh in more than a century have killed dozens of people so far and displaced nearly 4 million people… Experts say the catastrophic rain-triggered floods, which submerged large part of the country’s northern and northeastern areas, are an outcome of climate change.” 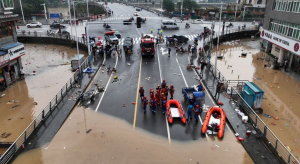 “Amid record-breaking floods in China, premier calls for stepped up disaster control and relief.

“Executive meeting of the State Council told more extreme weather predicted and everything must be done to ensure ‘safety of people’s lives and property’… Scientists have warned that climate change will result in more extreme weather events, from more intense floods to droughts and heatwaves.” 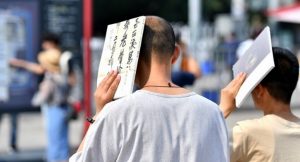 “The heat will increase in the East with record hot conditions in Henan Province. The capital Beijing will rise to 38C on Saturday. Stay tuned.” 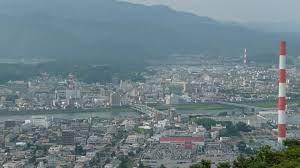 “Unprecedented June heat is baking western Japan in the middle of the rainy season.

“The temperature rose to 36.1C [97F] in Nobeoka Thursday, making it the highest for June since records started in 1961.

“The heat will shift to the Tokyo area during the weekend. Get ready!”

“Very cold temperatures this morning in New Zealand with up to -11.2C [11.8F] in Middlemarch. 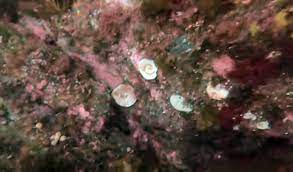 “The discovery comes after researchers raised the alarm in May, when sea sponges off New Zealand’s southern coastline were found bleached for the first time.”