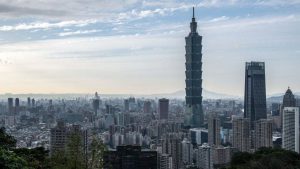 “Heat is unstoppable in China and also in nearby Taiwan: After weeks of being close to the record, on 21st July Taiwan recorded its highest temperature in history with 40.7C /105.3F at Yuli (Hualien county). 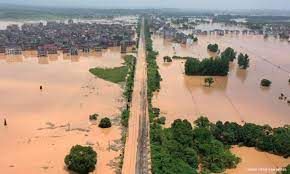 “Towns and farmlands inundated by floods, homes and roads buried by landslides, crops withering under scorching heat, hazmat-suited Covid workers collapsing from heatstroke. Since summer began, scenes of devastation and misery have been playing out across China as the world’s most populous nation grapples with an unrelenting torrent of extreme weather emergencies.” 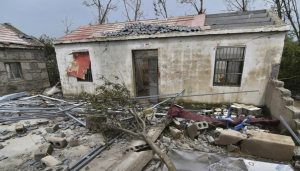 “A tornado blew through 11 villages in a farming region of eastern China, damaging homes, killing at least one person and injuring 25 others… Tornadoes are relatively rare in China, although 12 people were killed and more than 300 injured in Jiangsu and the central city of Wuhan by tornadoes last year.” 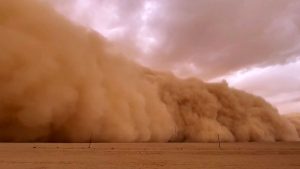 “A massive sandstorm darkened towns and villages in northwest China as it swept through the Haixi Mongol and Tibetan Autonomous Prefecture in Qinghai province on July 20, 2022. Video showed the storm rising ominously on the horizon before it moved into populated areas…” 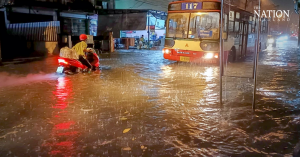 “Wednesday’s record rains in Bangkok cripple the centre of the city.

“Wednesday night’s downpour wasn’t just torrential, it was record breaking. In fact it was the highest rainfall recorded in 67 years in some areas of the centre of the Thai capital. Even the 20 baht convenience store raincoats were no match for the torrential rain.” 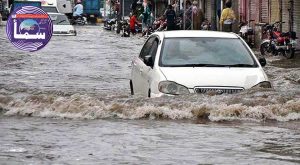 “A seven-hour spell of heavy rainfall lashed parts of Lahore on Thursday as the provincial capital of the Punjab province received at most 234 mm [9.2 inches] of downpour during the period, ARY NEWS reported.” 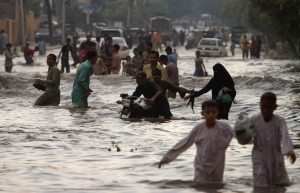 “As flood conditions worsened due to incessant downpours, Pakistan authorities fear the count to rise. According to a report by The Associated Press, more than 5,000 houses have been washed away as the rains lashed pockets of Pakistan whilst it is reeling under a massive financial crunch.” 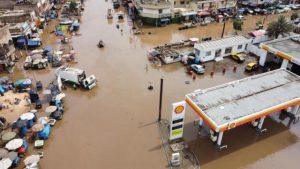 “Wednesday’s downpour was particularly strong, however, with 84 millimetres (3.3 inches) of rain recorded in Dakar in the space of two hours… Rainfall qualifies as “extreme” when it surpasses 50 millimetres (2 inches), said senior ANACIM official Pape Ngor Ndiaye.”

“Namibia has lost nearly 20 percent of its forest area during the past 30 years as a result of unsustainable use of resources, a government official said Wednesday.

“To contain the loss, Namibia is pondering introducing a provision in its law that will compel everyone who harvests vegetation to plant more, Minister of Environment, Forestry and Tourism Pohamba Shifeta told a national conference in Windhoek, the capital.” 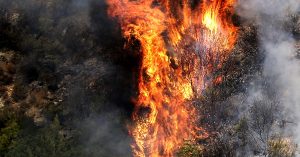 “The blaze broke out in forested areas in the town of Qabaait in northern Lebanon’s Akkar governorate. The fire reached close to people’s homes and damaged pine trees and olive groves in the area.” 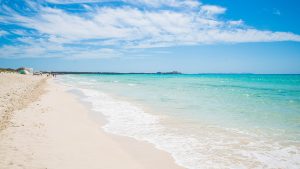 “The sea in Mallorca is three degrees warmer than usual…

“The warning coming from AMAL is that rain is very badly needed, and that if it continues to rain as little as it did this past year, the Algarve could be “in serious trouble”. “If the next water year is the same as the last, water may start to run short in the taps of the Algarvian people by October 2023,” explained AMAL boss António Pina said.” 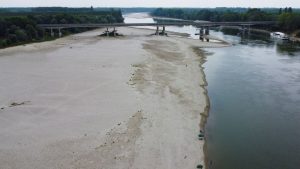 “Italy drought: Lombardy farmers warned that water could run out before the end of July.

“The northern region of Lombardy is one of the hardest hit… “The last reserves for agriculture are running out and cannot last beyond 25-30 July,” Attilio Fontana, governor of Lombardy, told a press conference in Milan on Tuesday.” 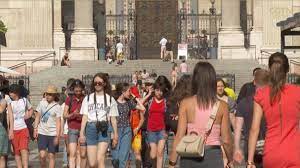 “New heat records are expected for this weekend in Hungary. Daily temperatures can even reach 40°C in some parts of the country, with no hope for precipitation. As a result of the extreme weather, red code warning has been issued in the country. The heatwave alert is in effect from Thursday morning until Monday evening.”

“Hamburg in northern Germany has just smashed its all-time heat record and exceeds 40°C [104F] for the first time in recorded history.” 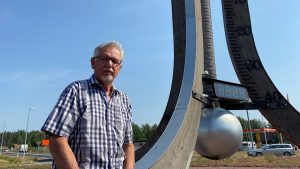 “Historic hot day in Sweden with up to 37.2°C [99F] in Målilla, which is the new *reliable* national all-time record! 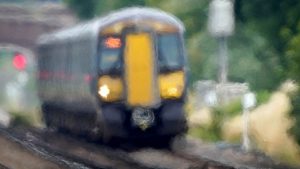 “Severe disruption on Britain’s railway continued on Wednesday while engineers worked to repair the effects of an unprecedented heatwave, as Network Rail announced a new “resilience taskforce” to plan for future extreme weather.” 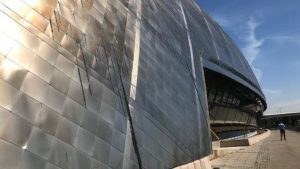 “Scotland’s record-breaking highest temperature, achieved on Tuesday, is even higher than first thought.

And a quick recap of recent UK heat records for you: 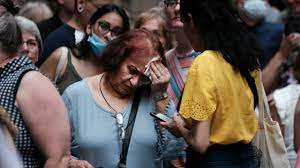 “Record temperatures set across US as heat wave engulfs nation.

“A relentless US heat wave that has triggered health alerts for more than 100 million people is set to intensify this weekend, with temperatures and humidity forecast to surge to suffocating highs in many parts of the country.” 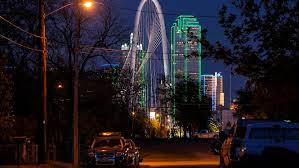 “After a brutally hot day, Oklahoma and Texas had to suffer a terribly hot night, in some cases the hottest on records.

“Frederick had a Tmin of 90F/32C after yesterday Tmax of 114F/46C. It smashed by 3F its previous highest Minimum temperature. Most of USA is sizzling today.” 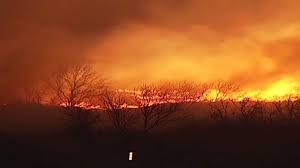 “Texas is hit by record twenty four wildfires that have burned through 7,700 acres and destroyed multiple homes amid record 110F heatwave and winds that have fanned flames…

“With excessive heat warnings expected in the next 10 days and little rain forecast, the flames are expected to claim more property as they draw closer to urban areas.” 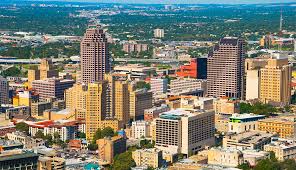 “The ferocious heatwave that is gripping much of the US south and west has highlighted an uncomfortable, ominous trend – people are continuing to flock to the cities that risk becoming unlivable due to the climate crisis.” 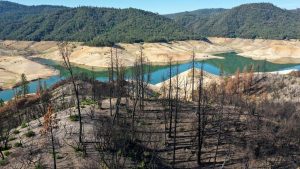 “ABC News chief meteorologist Ginger Zee discusses the severe drought in Lake Mead in Nevada that provides water to 40 million Americans, suffering its lowest levels since the 1930s [when it was created by the Hoover dam].” 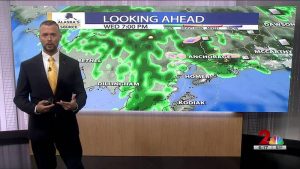 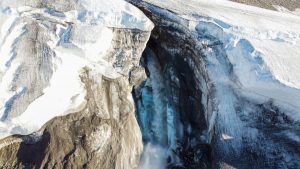 “The amount of Greenland ice that melted last weekend could cover West Virginia in a foot of water.

“The water off the coast of northwest Greenland is a glass-like calm, but the puddles accumulating on the region’s icebergs are a sign that a transformation is underway higher on the ice sheet. Several days of unusually warm weather in northern Greenland have triggered rapid melting…” 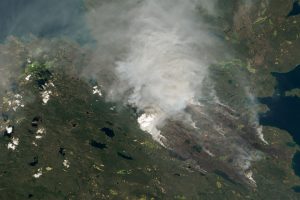 “Two weeks later, several fires had grown much larger and more intense, creating rivers of smoke that flowed over parts of Khabarovsk and the neighboring Republic of Sakha… According to Sakha’s emergencies ministry, 51 fires burned across roughly 9,737 hectares (38 square miles) on July 18.” 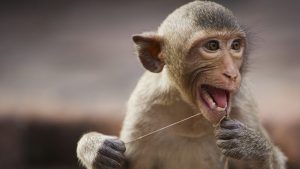 “The long-tailed macaque and the monarch butterfly are among species classed as endangered for the first time, as Earth’s biodiversity declines accelerate.

“All the world’s remaining 26 sturgeon species are now also officially at risk of extinction, up from 85 per cent in 2009.”