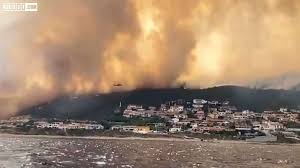 “Soaring temperatures and strong winds have sparked wildfires across Greece, Spain and in Italy, where blazes on Sardinia forced 1,000 people to flee their homes.

“As temperatures hit 40C [104F] over the weekend, flames fanned by southwesterly winds reduced 50,000 acres in the Sardinian province of Oristano to a charred, blackened landscape.”

““This is a disaster without precedent,” said Christian Solinas, a local governor.

“A severe heat wave is expected to blaze through Greece for the next week, the National Meteorological Service announced Monday…

“…temperatures are supposed to skyrocket again to 43 degrees Celsius (109 degrees Fahrenheit) in some parts Greece, reminding many of the deadly 1987 heat wave.“ 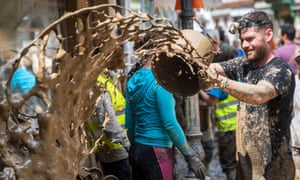 “Far-right groups in Germany including Covid vaccine opponents and supporters of the rightwing, populist AfD party are reportedly attempting to win support by offering assistance to salvage operations in flood-stricken parts of the country.” 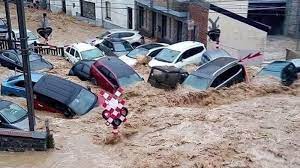 “The southern Belgian town of Dinant was hit by the heaviest floods in decades on Saturday after a two-hour thunderstorm turned streets into torrential streams that washed away cars and pavements.

“It was the second time in just over a week that downpours have affected the region – more than 200 people died in flooding across Belgium and Germany last week.” 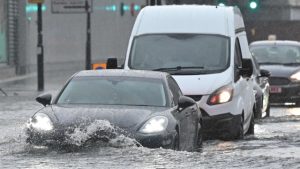 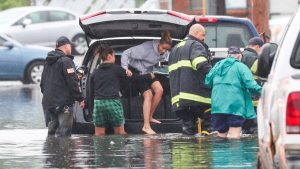 “Will Boston have its wettest July in history? It’s already the second wettest.

“With just a few days left in the month, Boston is within spitting distance of breaking the record for the wettest July in history (or at least since records began in 1872).” 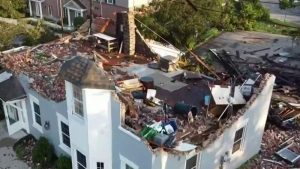 “Tens of thousands of customers remain without power after tornadoes tore through Michigan.

“Thousands of customers are still without power after three tornadoes tore through Michigan over the weekend… The severe weather resulted in “significant damage to the electric infrastructure,” utility DTE said on its website.” 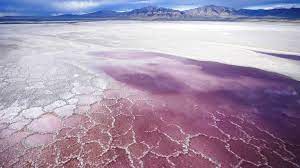 “Candice Hasenyager, deputy director of Utah’s Division of Water Resources, said the new record comes months earlier than when the lake typically hits its lowest level of the year.” 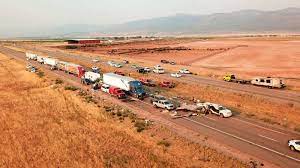 “At least eight killed in 20-car pileup in Utah sandstorm.

“The crashes happened on Interstate 15 near the town of Kanosh on Sunday, the agency said in a news release. Several people were reportedly taken to hospitals in critical condition. Ground and air ambulances were used to transport crash victims.” 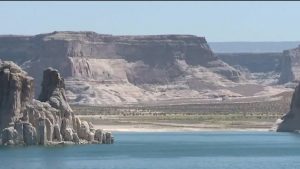 “As of Sunday, Lake Powell had fallen to roughly 3,554 feet in elevation — just 33% of capacity — according to the US Bureau of Reclamation, below the previous all-time low set in 2005. Lake Powell and nearby Lake Mead, the nation’s largest reservoir, have drained at an alarming rate this year.” 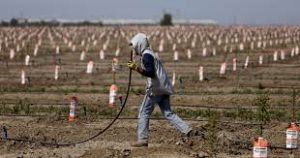 “As California endures an increasingly brutal second year of drought, state water regulators are considering an emergency order that would bar thousands of Central Valley farmers from using stream and river water to irrigate their crops.” 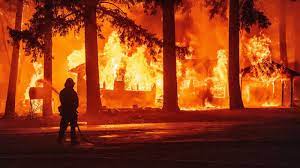 “At least 85 wildfires torch 1.5m acres across drought-hit US west.

“At least 85 active wildfires have torched roughly 1.5m acres across 13 US states, mostly in the west, where the parched landscape has fueled the fast-moving flames and caused extreme fire behavior that has proved difficult to contain.” 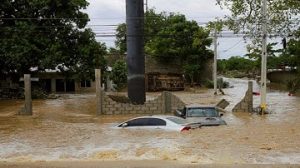 “The intensity of the precipitation on July 25 reached 120 millimeters per hour [4.7 inches per hour], an amount “far above normal,” according to state government officials during a press conference on Monday.” 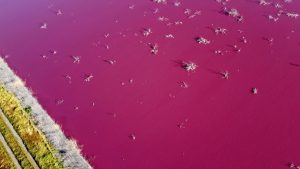 “A lagoon in Argentina has turned bright pink due to pollution, a development that has alarmed environmentalists.

“Activists said that pollution in the lagoon in Argentina’s southern Patagonia region is caused by sodium sulfite — an antibacterial product used in fish factories. The chemical is typically used to preserve prawns for export.”

“Unprecedented heat across the Northern Territory has led to multiple records being broken, with more forecast as July daytime temperatures continue to be above average.” 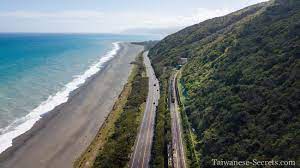 This was 0.1C above the previous national record set at the same place just 1 year ago.” 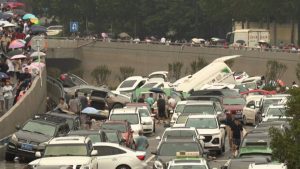 “The painful search for survivors of China’s flood disaster continued in Henan province Monday, as grief and shock turned to frustration among some of the survivors scouring the debris for their relatives.” 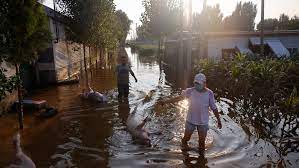 “‘The sky has fallen’: Chinese farmers see livelihoods washed away by floods…

“Chinese farmer Cheng wades through knee-deep water, pulling dead pigs behind him one-by-one by a rope tied around their ankles as he lines up the bloated carcasses for disposal.” 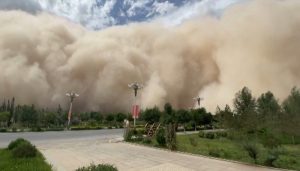 “A sandstorm has swept across Dunhuang City in China’s Gansu Province, reducing visibility to just five metres… Videos show the wall-like sandstorm covering urban areas and highways. It is believed to have reached over one hundred meters high.” 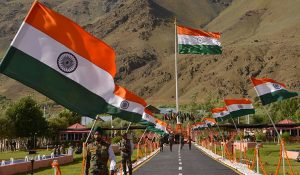 “Incredible temperatures at high elevations in Kashmir [India]. The 38.4C [101.f] recorded at Kargil at 2804m above sea level is a world record of highest temperature for its elevation. 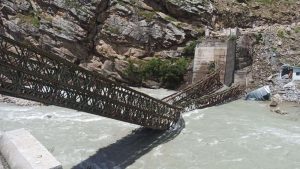 “Nine people have been killed in a landslide in the northern Indian state of Himachal Pradesh after boulders fell and hit a vehicle they were travelling in… Video footage showed boulders falling, hitting vehicles and even causing a bridge to collapse.” 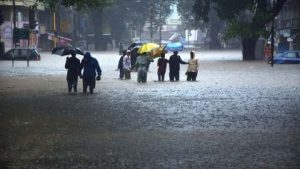 “Rescue teams in India were digging through thick sludge and debris on Monday to find over 60 people trapped in landslides caused by torrential monsoon rains that have so far claimed more than 160 lives four days.

“The western states of Maharashtra and Goa, as well as Karnataka and Telangana in the south are the most affected by heavy rains that have flooded croplands over thousands of hectares and forced authorities to move over 230,000 people to safer places.”

“Iran seems in a perennial record heat wave, one after another. Today 26 July it was the turn of the city of Khorramabad (1150m above sea level) to record its hottest day in history with a temperature of 46.4C [115.5F].

“The city has broken or tied its record for 4 years in a row!“

“Middle East heat Wave: 26th July the Saudi Station of Dammam, located in the NE of the country, recorded a maximum temperature of 50.4C [122.7F] which ties the highest temp. ever recorded which was just 1 year ago.” 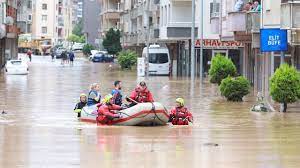 “There is seemingly no respite in sight for locals reeling from floods and landslides over the past two weeks, as authorities warn that heavy precipitation is likely to affect central and eastern parts of the Black Sea region in northern Turkey on Tuesday.” 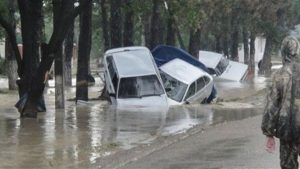 “Russia’s Sochi region hit by floods for second time in a month.

“Emergency sirens sounded in the southern Russian region of Sochi overnight after rivers burst their banks in heavy rain for a second time this month and flooding closed a motorway.” 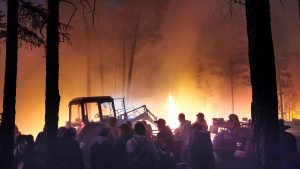 “More than 5,000 regular firefighters are involved, but the scale is so large and the area is so enormous that 55% of the fires aren’t being fought at all, according to Avialesookhrana, the agency that oversees the effort.” 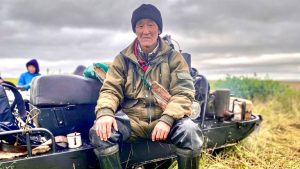 “Climate change: The Arctic reindeer herder whose livelihood is threatened by warmer winters…

“Kemlil lists the ways in which he has noticed changes to the tundra environment… New lakes appearing or disappearing as the permafrost thaws, forcing the reindeer to adopt new migratory routes; less fish in the rivers; fawning season starting 10-15 days earlier with the earlier spring.” 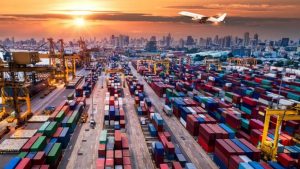 “Global shipping industry disrupted again, this time by floods in Europe and China.

“The floods in China and Europe are yet “another body blow” for global supply chains, the CEO of a shipping firm told CNBC on Monday. “Rarely does a week go past without something new,” says Tim Huxley, CEO of Mandarin Shipping.” 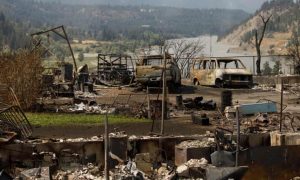 “FT analysis of national temperature records compiled by weather historian Maximiliano Herrera shows that in 180 of 222 locations, the most recent records have been for highs rather than lows.”

You can read the previous ‘Climate’ thread here. I should be back tomorrow with an ‘Economic’ thread but I’m seeing my parents for the first time since Christmas 2019 this week, so please forgive me if I miss a day or two.