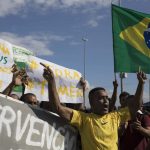 “A nationwide trucking strike over fuel prices in Brazil finally came to an end last week after 10 days of chaos in which roads were blockaded, South America’s biggest economy suffocated, and the CEO of Brazil’s state-controlled oil company was forced to resign.

“Supplies are back in the shops, and trucks back on the roads. And yet, things are far from normal.

“Brazilians were spooked by the ease with which the truckers brought the country to its knees, and by their calls for “military intervention” – a euphemism for a military coup.

““This strike showed that the country has extreme fragilities,” wrote economic commentator Miriam Leitão in her blog for O Globo newspaper.

“But instead of looking for ways to prevent it happening again, Brazilians are digging into entrenched positions…

“Amid a growing sense that Brazil is adrift, a poll by the Datafolha polling institute found that 87% of Brazilians supported the strike – but rejected tax rises or spending cuts to pay for the fuel subsidies that eventually resolved it.

“The cash-strapped conservative government of Michel Temer found the money by cutting investment elsewhere, including for health and education – a move likely to increase social tension in a country where poverty is on the rise.

“…sensitivity has been drowned out in an atmosphere of increasing polarisation.

Left and right hurl insults at each other over social media like rival supporters at a soccer game. Meanwhile, economists are slashing their growth forecasts for an economy only just limping out of recession.

““The strike and calls for military intervention are a wake-up call,” said Ilona Szabó, co-founder of Agora! (Now!), a new centrist group propagating “evidence-based public policies”. Szabo argued that too many people are looking for simplistic solutions to complex problems.

““Brazilians are crying for change but it’s not yet clear that they are prepared to put the public interest in front of private gain. Instead of rolling up their sleeves and building a common project they are clamouring for a saviour, a strongman, who can deliver the country from ruin,” she said.”

“The guerrilla group has been present along the Venezuelan-Colombian border for decades, but there are indications that the Marxist-inspired rebels are growing stronger and more brazen as they capitalize on the general chaos and security breakdown in Venezuela.”

“The financial crisis in Turkey continues with the Turkish lira (TL) having lost over 20% of its value against the US dollar and euro since the beginning of 2018… The situation is further aggravated by the fact that the country has an alarming currency account deficit. The currency deficit has now reached the point where Turkey is finding it difficult to get additional international credit in US dollars, which in turn leads to a difficulty importing oil.”

“Discussing the economic crisis in Algeria, Benchicou said that the regime has brought the country [Algeria] to “its knees” in the past two decades, adding that the national currency continues to devalue to the point of becoming “funny money.”” 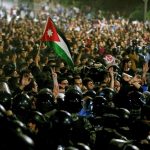 Protesters demonstrate outside the prime minister’s office in Amman late on June 2, as security forces stand on alert.

“The biggest protests in years in Jordan brought down the country’s prime minister and his cabinet Monday… Jordan’s education minister Omar Razzaz, a Harvard-educated economist, has been appointed the new prime minister and will name a new cabinet. It will be up to him to defuse a crisis over a tax plan — for Jordanians, the last straw in a long list of burdensome austerity measures imposed in the midst of the country’s economic crisis.”

“Nikos, 36, said that he had moved back in with his parents in a bid to cut down on expenses in order to keep his small business afloat.”

“The U.S. high-yield market has grown larger and riskier since the financial crisis. Issuers of debt have the whip hand as buyers compete to gain an allocation in the face of surging demand from collateralized loan obligations and retail funds. Companies are emboldened to seek ever-weaker covenants and are taking advantage of the current conditions to borrow more at lower margins. It’s as if the financial crisis never happened and the lessons from it are ancient history.”

“The US derivatives regulator is planning to cement a threshold at which swap dealers become regulated, a move that would exclude smaller companies from rules that would be subject to tougher supervision.”

“…the Trump administration argues that the cost of not responding to China’s “unfair trade practices — including dumping, discriminatory non-tariff barriers, forced technology transfer, over capacity, and industrial subsidies —” is more costly than the economic hit of tariffs. As long as that viewpoint holds sway in the White House, the trade war will move forward.”

“Global gross domestic product (GDP) growth could take a hit to the order of around one percent if tariff threats escalate into a trade war, S&P Global’s chief economist forecast Monday.”

[nations like Brazil cannot afford to lose any growth] 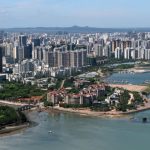 [again, what will this mean for nations like Brazil?]

“The fund will be run by Alberto Gallo, a popular investment bank strategist turned hedge fund manager, and will attempt to buy the equivalent of doomsday insurance through investments in credit, fixed income and equities which profit when those markets plummet or gyrate with unusual violence.”