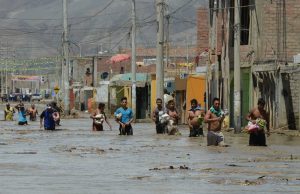 “Record floods and droughts fuelled by the El Niño and La Niña phenomena around the globe, from Australia to west Africa and the US to Argentina, are expected to become further intensified by climate change by 2030, according to the latest scientific reports.

“A new study published in Nature concluded that the influence of a warming planet in pushing up ocean temperatures in the eastern Pacific will be detectable in the weather patterns in eight years — almost 70 years earlier than previously thought.

“The La Niña phenomenon, which involves a large-scale cooling of the Pacific Ocean’s surface, drives changes in wind and rainfall patterns around the world. Typically, the pattern drives more rain in parts of Asia, including Australia, and drier conditions in parts of the US, South America and Africa.” 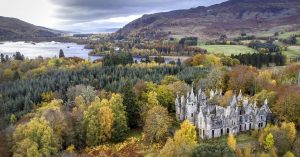 “Scotland weather: Scotland on course to record its hottest autumn ever.

“The Met Office defines autumn as the months of September, October and November. With just a few days of the season remaining, an average temperature of 9.78C (50F) places it warmer than 2006, the hottest autumn ever.” 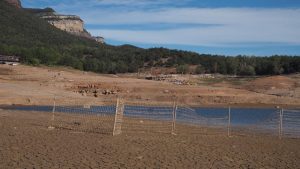 “The drought beyond Catalonia: almost half of Spain, at risk due to lack of water.

“…Catalonia is not the only territory on alert for a drought… Throughout Spain there are18 regions in an emergency situation, where measures have already been taken, 26 on alert and 29 in which the situation is worrying, according to the latest report available from Miteco.” 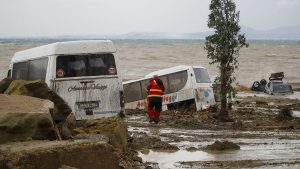 “At least seven killed by landslide on Italy’s Ischia island.

“The huge landslide was triggered before dawn on Saturday by exceptional rainfall and sent a mass of mud and debris hurtling through the port town of Casamicciola Terme… The island received 126mm (nearly five inches) of rain in six hours [after days of heavy rain], the heaviest rainfall in 20 years, according to officials.” 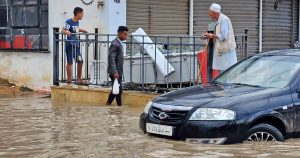 “The Libyan capital Tripoli was hit by heavy rains on Sunday morning, leading to flooding of main roads and disruption of schools. 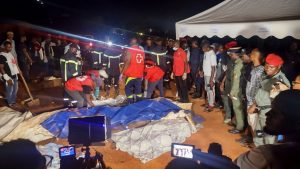 “”The search is continuing to find other bodies under the earth,” Naseri Paul Bea, governor of the Centre region that includes Yaounde, told CRTV radio.” 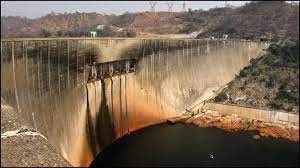 “Zimbabwe has suffered acute power shortages for several years, as successive droughts have resulted in poor inflows into the Kariba Dam…” 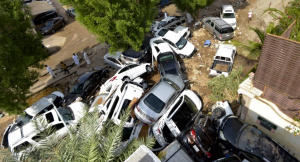 “”The climatic changes have a major impact on the rainfall intensity and will appear more in the future.””

“The corpses of two children were repatriated on Friday overnight in a northern Kirkuk who were swept away by the intense flash floods that hit the city. Stuck at a farm in an area between Hasar and Daramn village in Shwan subdistrict of the province, a 14-member family called for help as flash floods caused by heavy rainfall hit the area.” 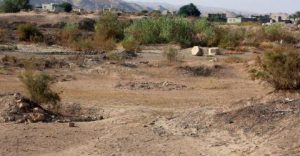 “In drought-hit Iraq, a dam threatens to swallow farmland.

“Jamil al-Juburi, 53, has never left his village in northern Iraq, where his family has worked the land for generations — but a dam will soon swallow his home, forcing them out. Tens of thousands of Iraqis are threatened by the Makhoul dam, which the government hopes will be operational on the mighty Tigris in five years.”

“Exceptional mind-blowing heat wave in China; Temperature rose to 34.3C [93.7F] in Yunnan Province and above 32C in 5 provinces.

“Absolutely brutal temperature of 34.2C at Luodian, which broke the November provincial record of Guizhou province despite being the end of the month!” 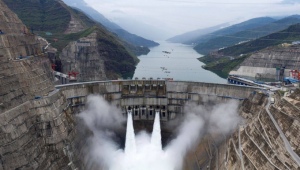 “Coal power plants in China’s Sichuan province consumed a city’s worth of extra water every day while a summertime 2022 drought was limiting hydropower production, in a vicious cycle that climate analysts worry heightens the risk of water scarcity.” 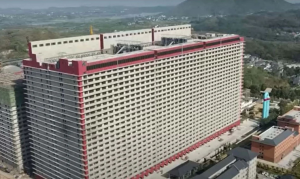 “A 26-storey apartment-style building- by far the biggest pig farm in the world, with a capacity to slaughter 1.2 million pigs a year has been built on the southern outskirts of Ezhou, a city in central China’s Hubei province, a report said.”

“This November has been exceptionally warm in East Asia, including Japan.

“In the island of Okinawa, in the Ryukyu, the station of Naha so far this month hasn’t recorded any single non tropical night. If it manages to finish the month without any sub 20C [68F], it will be the first time.” 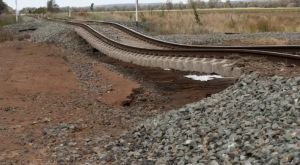 “Just outside the flood-affected town of Condobolin, the rail line that helps connect Sydney to Perth is suspended mid-air. The hanging track is warped, dropping and rising like a carnival ride. The ballast beneath has been washed away, testament to the power of the floods that have devastated the central west.” 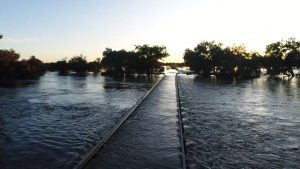 “Some regional New South Wales towns could remain cut off by flood waters for up to a month, with stranded residents relying on food and medications flown in by helicopter… There are 66 flood warnings across the state, 13 of them at emergency level.” 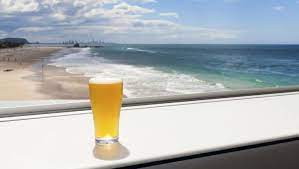 “The price of your favourite Christmas Day beer could become pricier thanks to the floods on Australia’s east coast, according to one industry leader.

“NSW Farmers Grains Committee chair Justin Everitt said that crops such as barley have been inundated with rain and equipment such as tractors has been bogged down as a result. Many roads have also been blocked due to the downpours.” 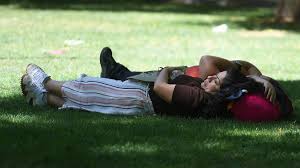 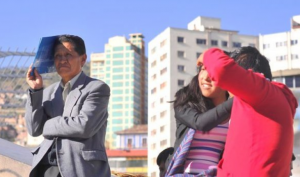 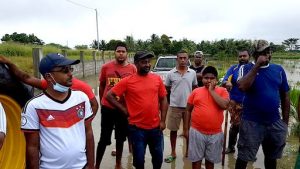 “Agricultural Society of T&T ASTT president Darryl Rampersad is warning the country that the price of food will now be at an “all-time high” after flood losses once again inflicted on farmers over the last few days… Rampersad said the farmers had incurred 100 per cent losses with the most recent flooding event.” 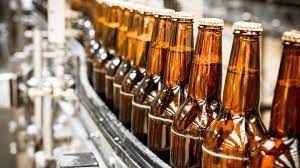 “Mexico is the world’s largest beer exporter and many of those big breweries our located in the North, a region now reeling from one of the worst droughts in decades. If the droughts continue and breweries are forced to rebuild entirely in new areas, Mexican beer exports will be vastly reduced, a reduction that will be felt around the world.” 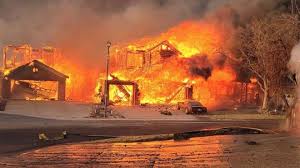 “Colorado wildfires are making it harder to insure homes. Could a publicly funded plan stave off an insurance crisis?

“The increasing risk of wildfires in Colorado is driving insurance carriers to raise premiums on homeowners’ policies — if they decide to insure them at all — and now the state’s insurance chief is suggesting a publicly funded pool of money be established to provide property insurance for those who can’t find it in the open market.” 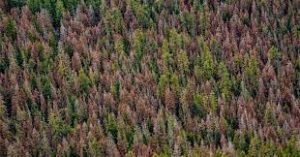 “Labeled “Firmageddon,” by researchers, the drought-driven “mortality event” is the largest fir tree die-off ever recorded in the region
Fir trees in Oregon and Washington died in record-breaking numbers in 2022, according to as-yet unpublished research conducted by the U.S. Forest Service.” 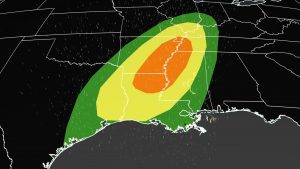 ““While severe storms occur with less regularity in the fall and winter than during the spring/summer months, major severe weather outbreaks have occurred during this time of the year,” Bill Bunting, chief of forecast operations at the Storm Prediction Center, noted. “One only has to think back to last December and the record number of tornadoes for the month and the tragically high number of deaths.”” 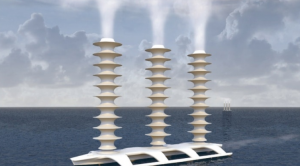 “Melting point: could ‘cloud brightening’ slow the thawing of the Arctic?

“The climate emergency is prompting some scientists to suggest extreme measures. But whether you call it geoengineering or biomimicry, others feel interfering with nature will have too high a cost… In theory, the sulphur dioxide particles would settle over the poles, but in practice, no one can be sure.” 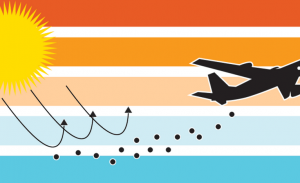 “Dimming the Sun to Cool the Planet Is a Desperate Idea, Yet We’re Inching Toward It.

“There are at least three initiatives under way that are studying the potential implementation of solar-radiation management, or S.R.M… The result of these initiatives, if not the goal, may be to normalize the idea of geoengineering.”

“Sperm Counts Are Dropping Across the World, And the Decline Is Accelerating.

“Sperm count among men worldwide is falling at an accelerated rate after halving over the last 40 years, a large new study said Tuesday, calling for action to stop the decline… The new study includes data from more than 57,000 men collected over 223 studies across 53 countries, making it the largest meta-analysis ever conducted on the subject.”