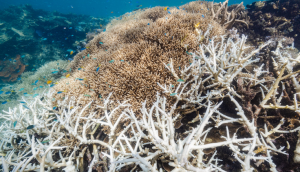 “Ocean temperatures over parts of the Great Barrier Reef have reached record levels this month, sparking fears of a second summer in a row of mass coral bleaching.

“Data from the US government’s National Oceanic and Atmospheric Administration (Noaa) shows sea surface temperatures over the northern parts of the reef have been the highest for any November on a record going back to 1985.” 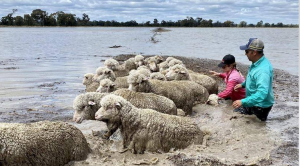 “South Australia floods could be worst since 1970s as Murray River to peak twice in December.

“A second peak in Murray River flows through South Australia is likely to hit 185 gigalitres a day in late December, with thousands of properties set to be flooded. Latest modelling has river flows rising to 175GL a day early next month, before a period when the water level will settle.” 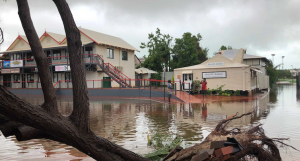 “More record rainfalls in Australia, this time in Western Australia. 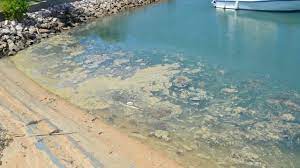 “Townsville [NE Queensland] residents are being encouraged to conserve outdoor water use as the city deals with an algal bloom due to the current heat wave.

“This algal bloom has resulted in Geosmin and MIB detection which are two harmless, naturally occurring organic compounds. In some parts of the water network across Townsville, this may result in the water having an earthy taste and odour.” 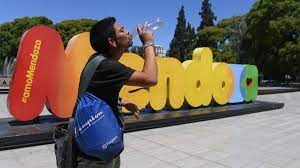 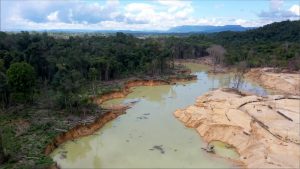 “A new land-use-change model suggests that the indirect impacts of mining operations in the Brazilian Amazon have been grossly underestimated.

“Impacts include not only deforestation but also loss of biodiversity, contamination of water sources, and health hazards for the Indigenous peoples living in the area.” 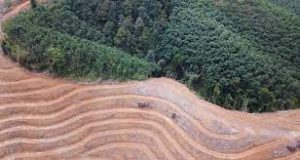 “More than half of the world’s largest palm oil companies are failing to assess their supply chains to ensure that sustainability and zero-deforestation targets are in place and being met, according to new research.”

“Multiple areas across Trinidad inundated yet again by flooding.

“History is repeating itself along the Manzanilla-Mayaro Road on Wednesday as floodwaters cross the roadway, causing a partial collapse – an event that occurred nearly eight years ago. In November 2014, multiple homes and areas of the road were damaged as waters from nearby rivers and the Nariva Swamp flowed freely into the Atlantic Ocean.” 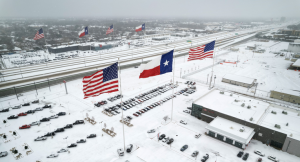 “Officials Issue Warning To Texas Oil Country As “Freak Storm” Approaches… One of the snowiest spots in the country during the Thanksgiving holiday is a very unlikely place: the Texas panhandle…

“The EURO model expects 12-18 inches for a large swath of the state’s northernmost part, consisting of 26 counties. In Amarillo, forecasts show 18-24 inches.” 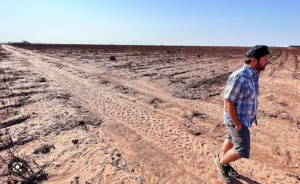 “Cotton farmers in Texas, where about 40% of the U.S. crop is produced, are facing a severe drought that is costing the industry billions.

“A lack of rain and extreme heat is forcing growers in the state to abandon almost 70% of the cotton acres they planted earlier this year, according to a forecast by the United States Department of Agriculture (USDA).” 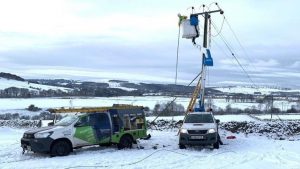 “A year after Storm Arwen left 240,000 homes and businesses [UK] without power, bosses at Northern Powergrid say climate change has influenced their plans for the future…

“Jim Cardwell from Northern Powergrid told ITV News Tyne Tees: “With climate change we expect to see more of this turbulent weather coming through, so we have set up a £7.7m charitable foundation to assist people.”” 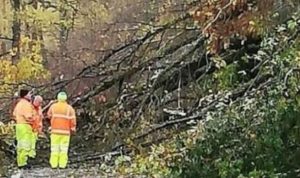 “Eyewitnesses described how the water from the River Wye which runs parallel to the A470 from Builth to Erwood, was “sucked into the funnel and rose higher than the trees.” 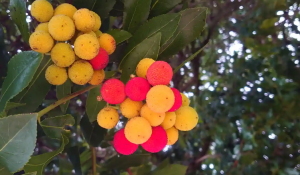 “Among the yellow and brown clumps of fallen leaves and the skeletal frames of deciduous trees this autumn are some surprising finds: green shoots and bright flowers.” 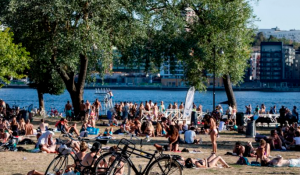 “The latest example of the impact of the climate crisis has come out of Sweden as a new report on the Nordic country’s climate change revealed that the region’s average temperature has risen nearly 2 degrees Celsius (3.6 degrees Fahrenheit) since the late 1800s and more precipitation.” 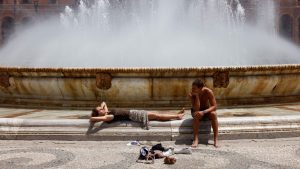 “Europe experienced the hottest summer on record for the second consecutive year in 2022, according to the EU’s Earth observation agency Copernicus. Climate change made the heat wave that struck the UK in June at least 10 times more likely, according to World Weather Attribution…” 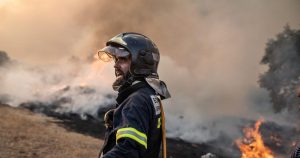 “An Act of God? The European countries where homeowners should be most worried about climate change.

“2022 has brought the climate crisis home for Europeans like no other year. It may be a ‘spyglass’ into the new normal, say researchers behind a new study showing the fire season reached record ‘burned area’ in some regions of southwest Europe. The continent also likely suffered the worst drought in 500 years this summer, followed by dangerous flash flooding in places.”

“It’s another incredibly warm night in the Black Sea.

“The temperature rose to 25.5C [78F] at Hopa Airport in Northern Turkey in the middle of the night with dozens of stations above 20C. Mid summer night temperatures! Very warm also in Georgia.” 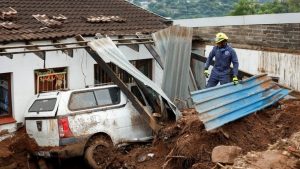 “Santam said on Wednesday that the April floods that hit KwaZulu-Natal were the biggest disaster it ever had to deal with in years. The insurance company looks set to pay billion of rands in claims.

“Damage to infrastructure is estimated to be around R25 billion. And while the City of Durban is still reeling, it has signed a memorandum of agreement with the insurer to provide it with disaster management support.” 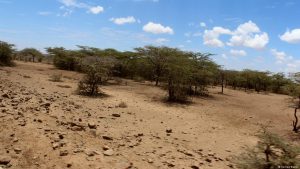 “Back to the future: Kenyans turn to tradition to tackle rising heat…

“Temperatures in Kenya have risen by 0.3 degrees Celsius per decade since 1985… Kenya’s meteorological department said more and more arid regions like Turkana are experiencing heatwaves where temperatures of 46 degrees Celsius (114.8 Fahrenheit) or higher last for two or three days.” 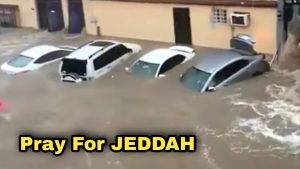 “According to Saudi Arabia’s National Center for Meteorology, the rainfall in Jeddah’s southern area between 8am and 2pm on Thursday, which stood at 179 millimeters [over seven inches], was the “highest” ever recorded. It exceeded the amount of rainfall registered in 2009 when dozens of people died in flash floods.”

And a short but eye-opening clip of the destruction: 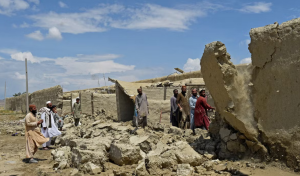 “He added that reconstruction and rehabilitation are the biggest challenges faced by his government.” 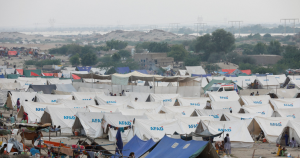 “A thin sweater, an acrylic shawl with patches, and a pair of plastic shoes, are Mohammad Jamal’s only defense against a stinging cold that has enormously added to a barrage of hardships his family and he have been facing for over two months.” 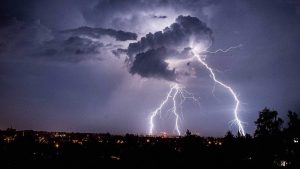 “A total of 414 persons have died in lightning strikes in the four districts of Balasore, Mayurbhanj, Bhadrak, and Jajpur in the last five years from 2017 to 2021, informed Revenue & Disaster Management Minister Pramila Mallik in the Odisha Assembly.”

“Another record hot month in China: this November is being record hot in 11 provinces of the country with an anomaly of about +2C vs 1991-2020. 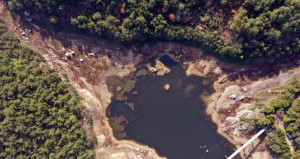 “Houses were inundated and people were stranded in farms after Uljin, Donghae and other eastern coastal cities in Korea were flooded by over 180 millimeters [7+ inches] of rain over two days earlier this week. However, regions on the other side of the country are now reeling from a completely opposite kind of climate disaster.” 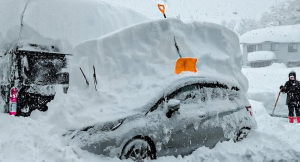 “The world’s unevenly warming climate is causing unforeseen changes to weather patterns across swathes of the planet… A new climate model indicates that heightened levels of water evaporating from the Arctic Ocean can lead to increased snowfall in northern Europe and Asia in late autumn and early winter.” 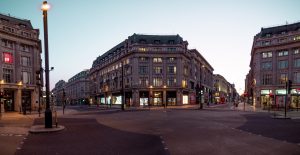 “More than half of the 50 per cent jump in methane’s growth rate between 2019 and 2020 was the result of reduced emissions from road transport, railways and planes during lockdowns… Reduced transport emissions led to lower levels of another gas – called the hydroxyl radical – that acts like a detergent to remove methane from the atmosphere, researchers say.” 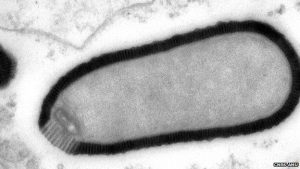 “Will the next pandemic come from the Arctic? Ancient virus that has lain frozen in Siberian permafrost for 48,500 years is revived [Humans – innately incapable of leaving well enough alone].

“An ancient virus that has lain frozen in the Siberian permafrost for 48,500 years has become the oldest ever revived so far, scientists say. It is among seven types of viruses in the permafrost that have been resuscitated after thousands of years.”