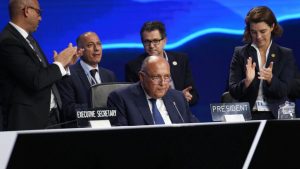 “World still ‘on brink of climate catastrophe’ after Cop27 deal… the outcome was widely judged a failure on efforts to cut carbon dioxide, after oil-producing countries and high emitters weakened and removed key commitments on greenhouse gases and phasing out fossil fuels.

“Mary Robinson, chair of the Elders Group of former world leaders… said: “The world remains on the brink of climate catastrophe.”

“Hundreds of dead fish have washed up on the north Kent coast.

“An array of different species were found on the shore between Reculver and Thanet early this morning. The Environment Agency has been alerted to the discovery by the Inshore Fisheries and Conservation Authorities (IFCA) which is leading an investigation.” 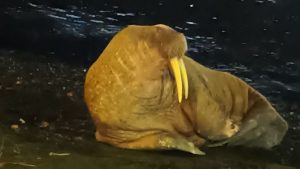 “In August this year, the River Seine became home to a beluga whale that was “dangerously thin” after refusing to eat. Despite an unprecedented rescue operation, the authorities were forced to euthanise the animal. Three months earlier, a young minke whale was put down after becoming “very distressed” while stranded in the River Thames.” 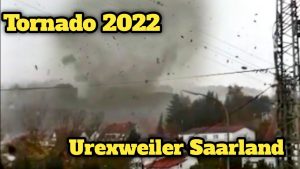 “Even on day two after the tornado in Urexweiler, the clean-up work continues… The tornado has caused great damage not only to the houses. Countless cubic meters of wood also fell victim to the storm event.” 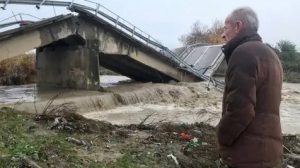 “Some schools were closed in the affected areas and Albanian emergency services had begun to evacuate people close to the town of Shkoder as a result of the flood danger… Although neighbouring Kosovo was also flooded, there were only reports of damage and no loss of life.” 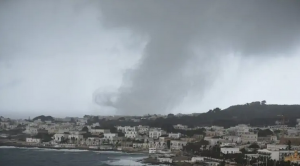 “As widely predicted in the past few hours,bad weather arrived in Southern Italy last night… the situation is literally explosive: violent storms are underway in various locations… In a few minutes 24mm [nearly an inch] of rain fell in Collepasso, 23mmin Galatina…”

“Temperatures are reaching 25C in the Caucasus in Georgia, 23C at Sochi in Russia and 29C in Turkey.”

“Catalonia will impose drought restrictions on Tuesday in the basin that supplies Barcelona.

“Catalonia imposes drought restrictions on Tuesday. This was announced on Monday by the ‘councilor’ of Climate Action, Teresa Jordà: “Tomorrow we will declare the drought alert in the Ter-Llobregat basin. There will be 26 counties on alert, 6.6 million inhabitants.“”

“[Pakistan’s] Rice exporters are braced for a lacklustre year ahead amid fears of at least a 30 per cent drop in production in Sindh due to damage to crops caused by flash floods earlier this year.

“Besides, they also face fierce competition from India, which is offering lower prices to foreign buyers.”

“This November is another record warm month in East Asia: started cool, but then with extreme anomalies and with one more week of abnormal warmth to go. 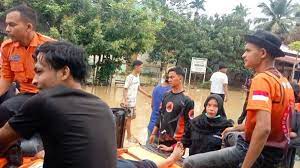 “…the National Disaster Mitigation Agency appealed to everyone to take precautionary measures against the risk of additional disasters that could be triggered by the extreme weather phenomena.” 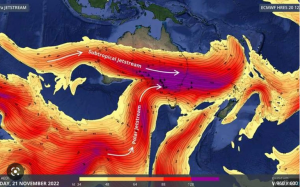 “The Bureau of Meteorology in Queensland issued a fire weather warning for the region on Monday morning with an “extreme fire danger” forecast. “Fresh, dry west to south-westerly winds combined with warm temperatures are expected to cause elevated fire dangers over South East Queensland on Monday,” the alert read.” 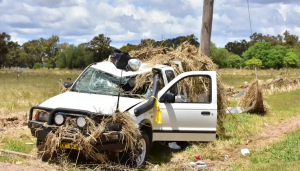 “Deniliquin evacuates ahead of major flooding with severe weather warnings across NSW.

“A severe weather warning has been issued for Sydney and much of New South Wales as another evacuation is ordered in a flood-struck Riverina town. The State Emergency Services has asked people in Deniliquin to leave their homes by Wednesday.” 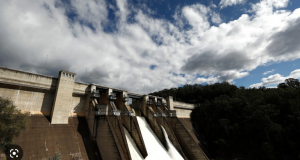 “Fears of Sydney water restrictions as only 25% of Warragamba Dam catchment deemed safe to drink.

“Ben Blayney, the head of water supply and production at Sydney Water, said the past year’s floods had placed extreme pressure on the city’s water filtration system. The Warragamba Dam is the largest of Sydney’s five drinking water catchments, catering to more than five million people in Sydney and the lower Blue Mountains.” 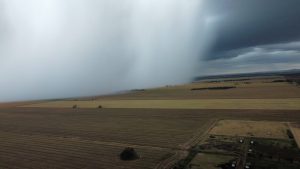 “Crops worth millions of dollars have been destroyed in the Victorian Mallee after hail storms smashed the region at the weekend. While some were insured against hail, others were not. The hail also smashed vehicle windscreens and windows of homes and stripped trees bare.” 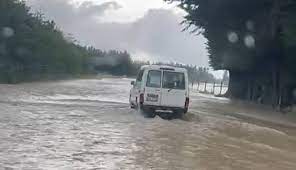 “In the space of 45 minutes, a Canterbury town [NZ] went from sunshine to a “frightening” flash flood, wiping out crops and causing widespread damage to town infrastructure.

“Residents of Peel Forest, 60km north of Timaru, measured 90mm [3.5 inches] of rainfall within one hour on Sunday evening. One resident said the surface flooding was so bad you could “jet boat down the road…”” 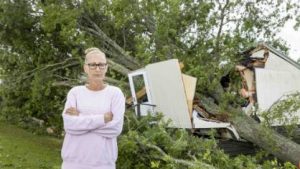 “Power out, damage after tornado reported in North Taranaki…

“In a statement, Fire and Emergency said it was alerted to reports “of a roof lifting on a property and powerlines down over a road in Lower Motunui” just before 10am this morning. It said two fire trucks attended to the reports and that one was still at the scene.” 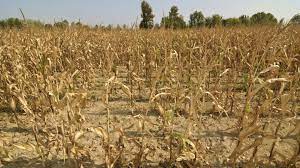 “…due to the drought there are “almost total” [crop] losses in some provinces, said the president of the Argentine Rural Confederations (CRA), Jorge Chemes. “Unfortunately, we are all going to be harmed, the country in general.”

“…the farming sector is going through a context of desperation as a result of the drought in the humid Pampas, and pointed… “there are almost total losses in some provinces.””

“The Heat wave in Argentina has moving North with temperatures up to 43C [109.4F] yesterday. A new heat wave is looming in the Central Areas with temperature set to shot well above 35C again.” 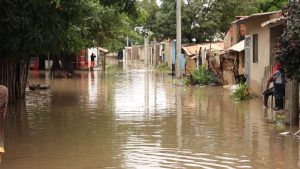 “The last weeks have been dramatic for the inhabitants of the Venezuelan Guajira: the floods caused by the rains have caused an outbreak of diarrhea, vomiting and fever in children and older adults, published the portal Radio Fe y Alegría Noticias.” 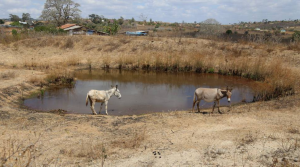 “Due to prolonged drought in the Mixteca of Oaxaca [Mexico], peasants are left without work and without harvest…

“”It’s the first year we’ve seen it very difficult. The work began to be scarce since February when the water began to subside, then the low water came and it did not rain, until mid-August. In previous years we had been working every day and now, only one or two a week,” adds Alma Delia.” 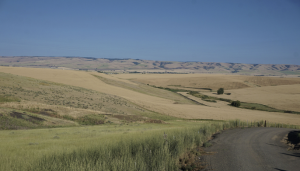 “The drought-stricken Colorado River basin has dominated headlines this year, but another water crisis looms further east and threatens to disrupt the food supply chain in North America, a new report warns…

“The Ogallala Aquifer in the Great Plains… is the main water source for agriculture in the Midwest. The aquifer is one of the largest in the world and one of most-stressed: Researchers estimate its southern portion will run out of water within the next three decades…” 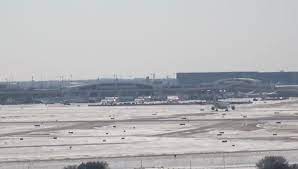 “New York isn’t alone in their snow storm, as on Friday, Dallas-Fort Worth International Airport received a trace of snow. Checking the record books, all the way back to 1898, there’s never been any snow reported as early as Nov. 18 until now.” 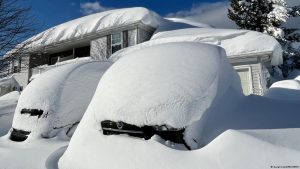 “The 77 inches of snow that fell on Orchard Park from Thursday night until Saturday morning may break a few snowfall records for Erie County, a National Weather Service meteorologist said.” 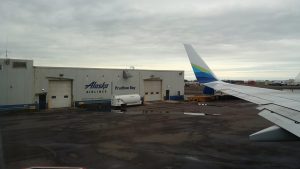 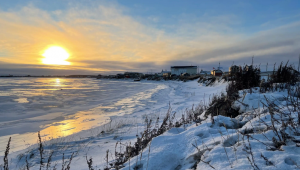 “The Arctic hamlet of Tuktoyaktuk, N.W.T., is collapsing into the ocean as it loses up to a metre of coastline each year. The people who live there are in a race against time to preserve their way of life — and their community — before it is washed away.” 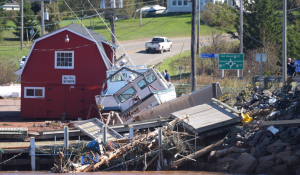 “Tides are rising, sands are shifting and coastlines are crumbling. As studies warn of rising seas and accelerated erosion resulting from climate change, coastal communities in Canada are wondering what the future holds.” 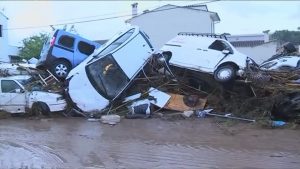 “Are we underestimating extreme rain in a changing climate? Research finds atmospheric moisture is increasing.

“New research has found we are failing to take climate change into account when considering current and future rainfall extremes. The Probable Maximum Precipitation (PMP) is theoretically the highest possible rainfall in a given location. It is critical in calculating the Probable Maximum Flood (PMF).”