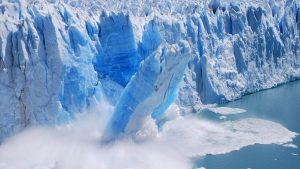 “In a world-first, an undeclared type of ice loss in the Arctic has been measured. A type of ice loss known as frontal ablation, when chunks of ice break off from the edge of a glacier, remains largely “unquantified” in most glacial models.

“Starting with the northern hemisphere, two researchers become the first to map all the glaciers that end in the ocean and estimate their pace of change over the previous 20 years.

“Their results reveal chilling patterns from 2000-2020 and suggest ice loss by frontal ablation is greater than melt in some regions.” 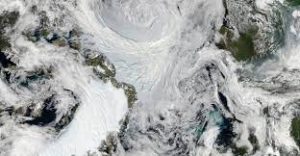 “Hurricanes threaten North American coastlines every year, and they appear to be intensifying as climate changes. Similar storms can also hit colder regions to the far north, and new research suggests they will intensify, too.” 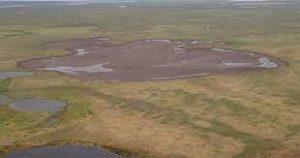 “Arctic Lakes Are Disappearing Fast, and Scientists Are Just Figuring Out Why.

“In an ominous sign of global warming, melting permafrost underneath Arctic lakes lets them drain into the ground… now it looks as if Arctic lakes are disappearing a century or more sooner than predicted.” 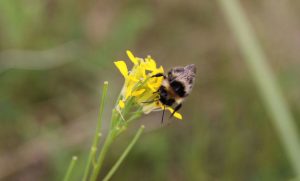 “Bees may have colonized a freezing Arctic island in Russia’s north by mistake, having been carried there by violent storms…

“The island is based in the tundra zone—a region just below the ice caps of the Arctic… Climate change may explain how the bees are able to survive in such conditions, as they may not be as cold as they were previously.” 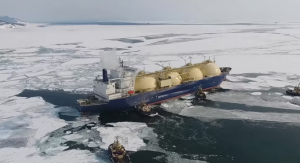 “One year after the crisis, there is again early ice on Northern Sea Route

“Last year’s early freeze triggered a critical situation with more than 20 vessels stuck in thick ice. This year, the shipping conditions in Russian Arctic waters might be even worse.”

“Ireland is provisionally on track for its warmest year on record, Met Éireann has said…

““It is obscene – it’s much too warm and the planet’s burning,” one woman told Newstalk reporter Josh Crosbie. “It’s very mild; it’s unbelievably mild. I mean I have stuff growing in the garden which wouldn’t normally grow this time of the year,” another woman said.” 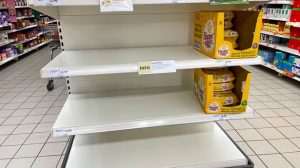 “Customers are continuing to turn up to supermarkets to find eggs out of stock, while some branches are limiting sales… One Tesco customer shared a notice that read: “Due to the hot summer we are currently experiencing low availability across our egg range. Sorry for any inconvenience.”” 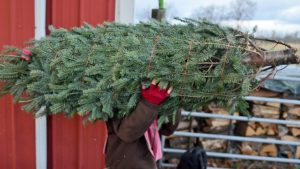 “Christmas trees ‘more expensive than ever’ amid shortage fears…

“Record summer temperatures this year have also reduced the number of trees likely to be available. The heatwave led many trees to shed leaves early this year in what some commentators described as a ‘false autumn’.” 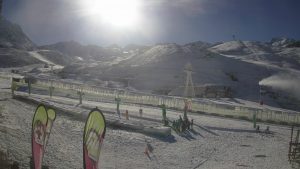 “In most years, Val Thorens is among the first ski resorts to open in France, due to its high altitude which normally allows for an earlier start to the ski season. Last year – during the winter of 2021-2022 – the Alps marked a decrease in snowfall, particularly the southern Alps, which recorded their lowest level of snow cover in over 60 years.” 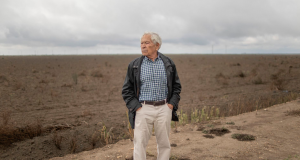 “Severe drought in southern Europe threatens to drive up the price of long grain rice by almost a third (29%).

“Research by ingredients firm Eurostar Commodities found that the volume of the next Spanish long grain rice crop will drop by 70% as a consequence of severe drought.” 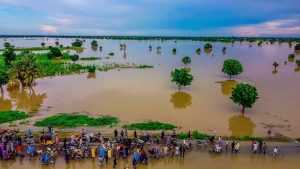 “Nigerian insurance industry experts estimate 1 trillion Nigerian naira ($2.3 billion) in insured losses from the recent floods in Nigeria that caused severe damage in 22 states, The Guardian reported. The industry experts said that actual losses could be much higher, due to the low insurance penetration in the country.” 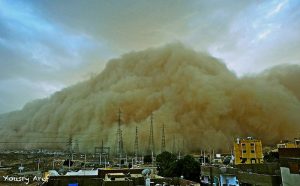 “‘Life halts when a storm hits’: how a climate threat affects Cairo and Dubai. Stark difference in experience of sandstorms in two cities raises questions as climate crisis deepens…

“The Middle East has always been hit by dust and sandstorms and is considered one of the dustiest regions in the world. The frequency of these storms is said to be increasing, causing financial losses of $13bn annually, according to the World Bank.” 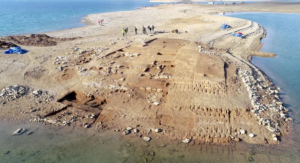 “Zakhiku: The ancient city in Iraq revealed by severe drought.

“Zakhiku disappeared altogether in the 1980s, when – as part of the Mosul Dam project, built under the late Iraqi leader Saddam Hussein – it was flooded and submerged. Previously known as Saddam Dam, it is Iraq’s largest and most important water reservoir used for downstream irrigation.” 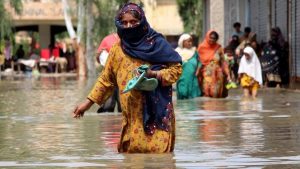 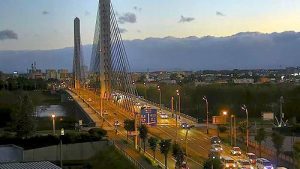 “Asian Heat Wave: More records for warmth were beaten in Japan yesterday from North to South.

“Temperatures reached 21.8C in Hokkaido [71.2]F and almost 30C [86F] in the South. Cooler conditions from today but the temperatures will remain mild. See Table of records from Japan Meteorological Agency.” 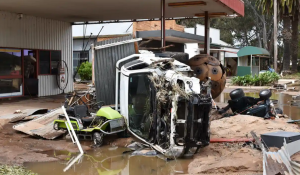 “A woman’s body has been found in flood waters in the New South Wales town of Eugowra, where locals say they are still in shock after an inland “tsunami” devastated the area.

“Police are yet to formally identify the body but say they believe it is 60-year-old Dianne Smith, a receptionist at the local doctor’s office who had been missing since Monday’s catastrophic flash flooding.”

“…water gushed out of the Wyangala dam in Australia’s New South Wales state as flash flooding hit the region.” 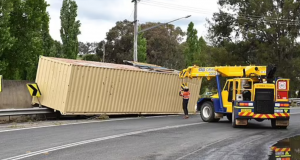 “A large shipping container has been spotted floating down the main road of a NSW town after it was inundated by floodwaters.

“Molong, near Orange, in the state’s central west, has been hammered by severe rainfall this week, with residents forced to flee the area.”

“Analysts believe that up to a million tonnes of wheat may have been lost due to rain and floods in New South Wales and Queensland. Australia is the world’s number two producer of wheat and before last month’s floods, global food markets had been hopeful that a record crop could ease tight inventories.” 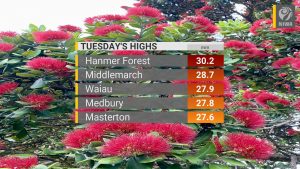 “First 30C of the season in New Zealand yesterday.

“Hanmer Forest in the South Island reached 30.2C [86.4F]. Note that New Zealand has been constantly warmer than average every month, in some stations like Auckland Airport since early 2019!” 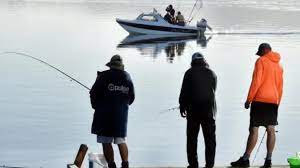 “Warming waters and the closure of a hatchery mean the days of catching salmon in Otago Harbour are likely coming to an end. Otago Salmon Anglers Association president Colin Williams said the declining salmon numbers meant it would no longer be running its annual salmon fishing competition.” 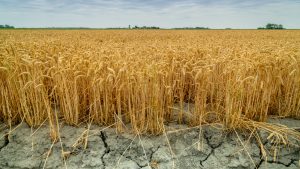 “Argentina expected wheat production down drastically because of drought.

“The 2022/23 wheat harvest forecast in Argentina has been cut to 11.8 million tons, down from 13.7 million tons previously, the Rosario grains exchange said in its latest report, warning it could fall further amid a protracted drought that is causing great losses for farmers and foreign currency short Argentina.” 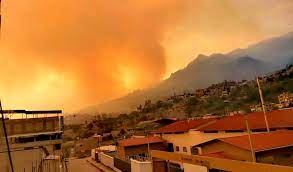 “Abancay [Peru] has been hit by seven forest fires that, simultaneously, expand through different areas of the city.

“Local authorities have alerted the population of the seriousness of this dantesque fire that has already claimed the lives of dozens of wild animals of the fauna of the place. Despite the presence of firefighters in the area, the work being carried out is practically in vain due to the intensity and magnitude of the fire…” 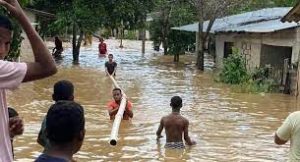 “Floods, landslides and emergencies: how long the rains will extend in Colombia?

“According to IDEAM, the rains estimated for the quarter that includes the months of November, December and January will be more than 20% compared to historical averages… more than 100,000 families have been affected, while 75,000 houses have suffered damaged of differing magnitudes.”

“The new project, known as a recharge system, turns unused fields into large ponds to hold water so that it can percolate into the porous rock and earth below, creating or restoring an aquifer rather than rushing to the sea.” 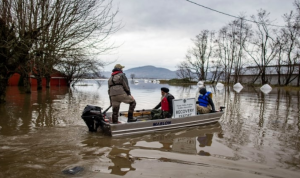 “The relentless rain came via an atmospheric river — an airborne stream of water vapour across the Pacific that originated in the subtropics. It triggered fatal mudslides, damaged critical highway infrastructure and called into question responsibility for flood mitigation in a province repeatedly pummeled by the impacts of climate change.” 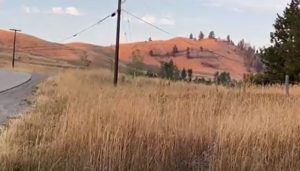 “New state of emergency in B.C. sparked by ongoing drought.

“People in Vancouver – or ‘Raincouver’ as it’s often called – usually don’t look forward to the rainy season – unless they are in a Level 4 drought. The sunshine coast is yet again dealing with a water shortage supply. That’s following a dry summer and fall, coupled with a chilly November that transitioned the region from drought straight into snowfall in a matter of weeks.” 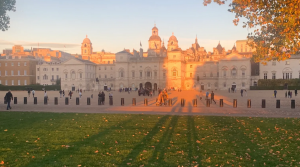 “Earth had its 4th-warmest October on record [quite a feat with ongoing La Nina].