“Tonight the temperature at Dalatangi E-Iceland rose to 24.1°C [75.4F] – the highest post-autumn equinox temperature ever recorded in Iceland.

“…as storm Fiona circulation draws in an atmospheric river, 100 mm rain is forecast for the tip of the southern Greenland ice sheet…” 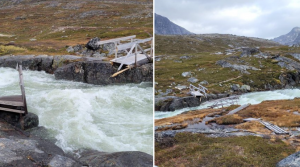 “Extreme rain at Kobbefjord Research Station [Greenland] has flushed the bridge at the station away! The river is uncrossable… Interesting part of the field season left… Crazy weather.

“Photos by Claus Stampe Spile, who was on a hike…” 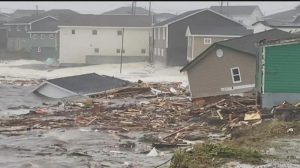 “‘It is surreal’: Canada’s Atlantic coast residents describe devastation as Fiona wipes away homes and knocks out power for thousands. 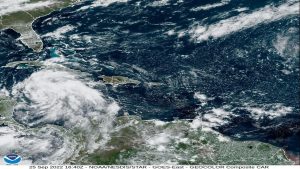 “A state of emergency has been declared in Florida as Tropical Storm Ian heads towards the US coast and is forecast to become a major hurricane.

“Governor Ron DeSantis expanded a previous warning on Saturday to cover the whole state and urged people to prepare for landfall. It activates the state’s national guard and frees up emergency funding.” 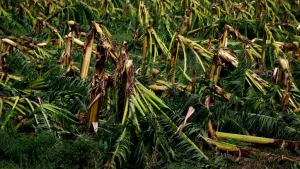 “Fiona destroyed most of Puerto Rico’s plantain crops — a staple for people’s diet.

“Puerto Rico’s plantains — a key staple in residents’ diets — were among the crops hit so hard by Hurricane Fiona that the island likely won’t be able to produce any for the upcoming holiday season.” 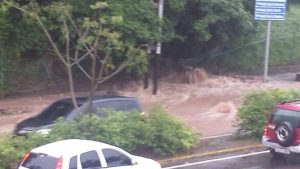 “At least seven people have been killed in western Venezuela after heavy rains swept away a group of people at a religious gathering, the state’s governor said.

“Around 40 members of the Methodist Church, a Protestant religious group, had gathered in Tachira state on Friday when heavy rains suddenly caused flooding, governor Freddy Bernal said on Twitter on Saturday.” 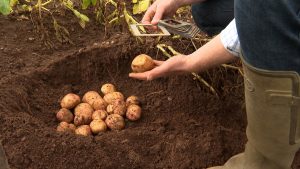 “Potato farming in Scotland ‘under huge threat from climate change’. Worst drought farms have seen in decades is hampering conditions.

“Ben Shoreman said his farm in East Lothian had received less than a third of its usual rainfall during the summer months. “It’s been soul destroying,” he said. “It doesn’t cost us any less to put it in or any less work or hours.” 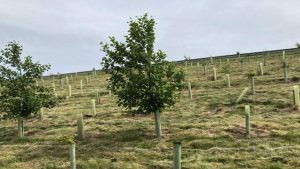 “Gloucester City Council announced in February that it would plant 12,800 saplings across the city as part of its aim to become carbon neutral. Councillors have since been told that 95% of them – about 12,100 – have died. The council blamed the trees’ demise on the “unprecedented” hot and dry weather.” 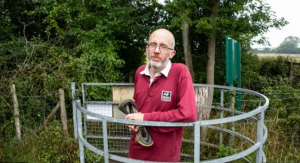 ““Trees and bushes have got really stressed because of the drought. Their response is to put all their efforts into producing more seeds, because that helps them pass their genes on to the next generation,” he says. “It may be their last gasp for getting progeny.”” 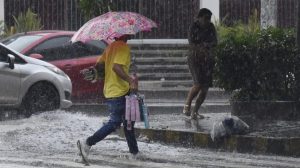 “Get ready for autumn of high-risk violent storms in France.

“The Mediterranean Sea was up to 6C warmer than usual this summer, making the south of France particularly vulnerable to heavy downpours… Experts warn that the particularly dry soil, which struggles to absorb rain, creates a serious flooding risk.” 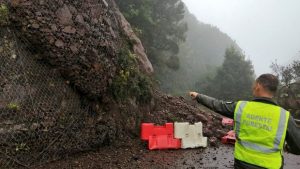 “Spain’s Canary Islands recorded its heaviest rainfall ever Sunday as storm Hermine hit the archipelago overnight, accumulating up to 165 liters [6.5 inches] of rain per square meter.

“According to meteorologists, weather stations across the Canary Islands had never recorded so much rain during the month of September, breaking an all-time record.” 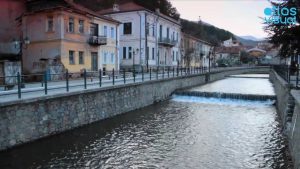 “Exceptional cold on 25 September in the Balkans and Northern Greece. 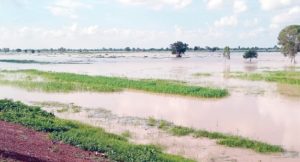 “There are fears among stakeholders that the flooding currently wreaking havoc on rice farms in producing areas will affect harvest in this year’s rain-fed circle…. thousands of hectares of rice farms in Taraba, Jigawa, Kano, Benue, Niger, Kogi, Kebbi, among other producing states up North, have been reportedly washed away.” 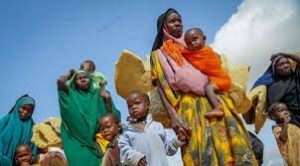 “Thousands of Somalis are fleeing to neighboring countries following escalating drought which has triggered an acute food shortage, the United Nations has noted while appealing to the world to chip in and assist the Horn of Africa nation… Most of those who have fled have settled in Kenya…”

“At least 11 people, including eight police and a local chief, have been killed in drought-stricken northern Kenya by cattle rustlers whom they had been chasing, police said Sunday…

“Kenya, the most dynamic economy in East Africa, is in the grip of the worst drought in four decades after four failed rainy seasons wiped out livestock and crops… theft of livestock or quarrels over grazing and water sources are common…” 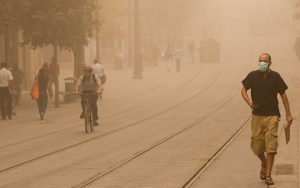 “Dirty air in the Middle East caused by humans, not by natural dust storms – study…

““Our research has demonstrated that hazardous fine particulate matter, which is distinct from the less harmful coarse desert dust particles, is largely anthropogenic in origin and is a leading health risk factor, as well a significant contributor to climate change,” Osipov asserted.” 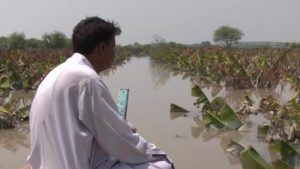 “This summer’s flooding, caused by monsoon rains nearly triple the usual ferocity, wiped out huge swaths of crops, leaving already impoverished families struggling to obtain food. Farmers and officials warn that Pakistan could now face serious food shortages at a time when the government is strapped for cash and world food prices are high.” 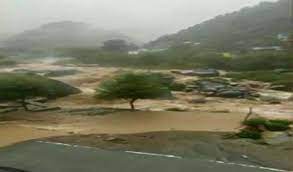 “Officials said 39 people had been killed by lightning in the past five days, prompting authorities to issue new guidelines advising people how to protect themselves during a thunderstorm.” 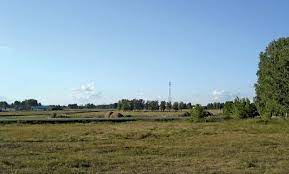 “In Central Asia near 40C north of 40N of latitude in Turkmenistan (also exceptional).” 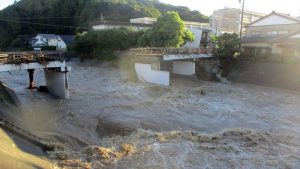 “Shizuoka had 405mm [16 inches] in 12 hours, making it the all-time record, and 140% of its monthly rainfall for September. Talas killed two people in the nation.” 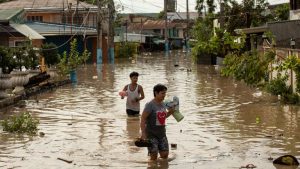 “The typhoon caused gusts of up to 240kph (149mph) on Luzon, where more than half of the country’s 110 million population live… A [woman], standing on top of the rooftop of her home, shouted that the country’s leaders needed to “focus on climate change”.” 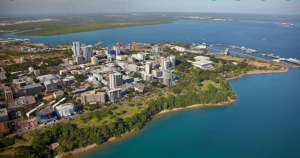 ““Australia is still with a persistent heat wave in the North: on 25th September the city of Darwin, Northern Territory. had a minimum temperature of 27.4C [81.3F, the highest ever recorded in September. 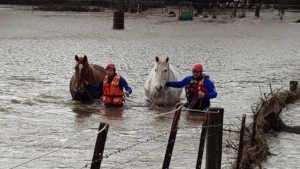 ““The ongoing flood emergency in New South Wales is expected to continue due to a new trough forecast to bring further wet weather across the state from Monday.

“The towns of Warren and Wee Waa, in the state’s north, are cut off by road and expected to remain that way for days.” 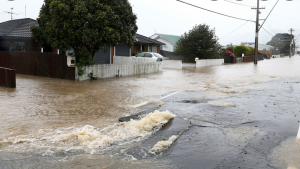 “The figures released by Greater Wellington Regional Council’s environmental science team on Monday, show rainfall amounts exceeded many of the previous highest totals recorded across the entire region. The wettest month was July. Rainfall in that month was up 200% on long-term seasonal averages.” 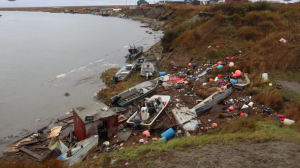 “Chevak stunned by food losses after Western Alaska storm: ‘We’re gonna have to start over’…

“The historic storm that slammed into Alaska’s west coast last weekend was a dramatic blow to food security in Chevak, where people are reeling after the storm destroyed boats, gear and many of the tools they use to hunt and fish for their main sources of food.” 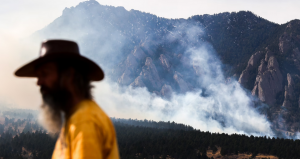 “Kampf and her team set out to determine whether more wildfires are burning at high elevations. The answer is unequivocally yes. And the consequences are dramatic: Snow in wildfire-burned areas is completely melting 18 to 24 days earlier than average. Climate change is already fueling an increase in the length, frequency, and severity of the wildfire season.”

“Termites Love Global Warming So Much That They May Make It Worse, Says Study.

“The results are striking: We found termites eat deadwood much faster in warmer conditions. For example, termites in a region with temperatures of 30°C will eat wood seven times faster than in a place with temperatures of 20°C. Our results also point to an expanding role… as climate change increases their potential habitat across the planet.” 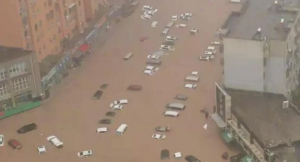 “The sting of climate risk is in the tails.

“…the range of possible outcomes has proven to be increasingly “fat-tailed”: extreme weather events such as heatwaves, severe storms, and floods are more likely than normal statistical distributions would predict. None of this bodes well for future political stability or economic prosperity.”