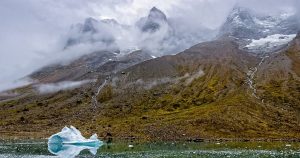 “As Climate Tipping Points Near, Scientists Plan for the Unthinkable. “Extreme climate change risks are under-explored,” Luke Kemp, a researcher with the Centre for the Study of Existential Risk at the University of Cambridge, warned at a pioneering conference on the theme at the University of Exeter this week.

““Climate scholars have strong incentives to err on the side of least drama,” he noted. “You don’t want to be branded an alarmist.” 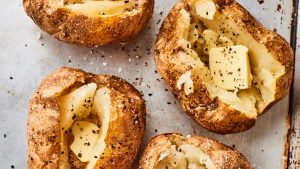 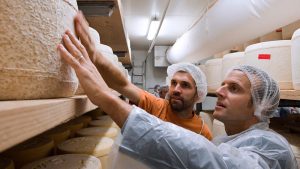 “Drought and Disease Have Decimated Many of France’s Beloved Foods This Year.

“In the 30 years since Laurent Lours began making Salers cheese—a specialty semihard cheese typical of central France, famous for its notes of grass and hazelnuts—he has never experienced a drought quite like the one that set in this summer.”

“Very cold nights in many regions of Italy with temperatures near freezing even at low elevations both in the North but also in the Central regions. For some stations it was the coldest night ever recorded prior to the autumn equinox.” 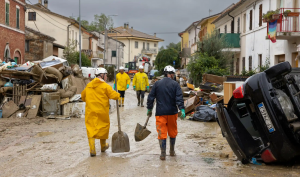 “‘I lost everything’: Italians count cost of deadly flood in Marche.

“Eleven people so far confirmed dead in floods that have forced climate crisis onto agenda before next week’s election… The storms, widely described as a “tsunami” and “apocalypse”, turned streets into rivers, tipped cars upside down and felled trees.” 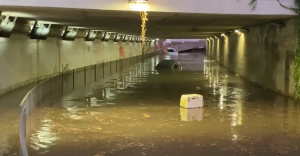 “Vehicles floated in a flooded roadway in Mataró, Spain, as the Meteorological Service of Catalonia reported over 100 mm (3.9 inches) of rainfall in the area on Friday, September 16. Firefighters reported rescuing people from vehicles inundated by floodwater.” 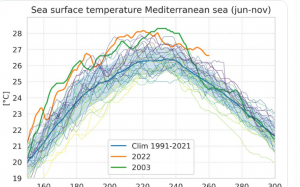 “The water temperature of Mediterranean Sea has never been so high at this time of year.

“This leads to a significant potential increase of extreme precipitation via (at least) 2 factors: more evaporation and increased atmospheric instability.

“Global warming is changing the intensity of singular events.” 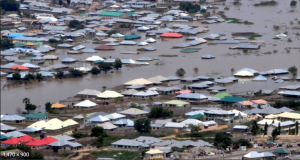 “No fewer than 29 more people have lost their lives to flood-related incidents in Jigawa [Nigeria] as waters continue to submerge communities in various parts of the state.

This brings to 92 the death toll from such circumstances, police authorities in the north-western state have said… The floods also took a toll on infrastructure in the state as some roads were cut off…” 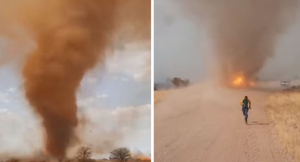 “One of the injured is Mayor Enrico Junius, who sustained 60% burn wounds, while another person sustained 100% burn wounds. Both were flown to South Africa for medical treatment. The fire covered an area of about 8 to 10 kilometres (km), and it also caused damage to about four or five farms in the surrounding area.” 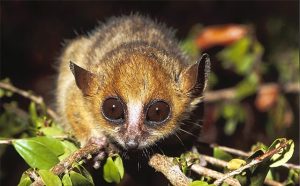 “The world’s smallest primate, Madame Berthe’s mouse lemur, may have gone extinct as large swathes of its forest home are cleared for crops, scientists studying the species in western Madagascar warn. The lemur – which weighs little more than a dormouse when mature – was first discovered in 1992.” 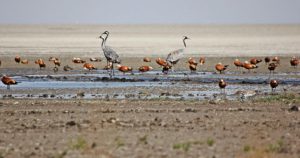 “Before drying up, Lake Seyfe Bird Sanctuary was home to over 187 bird species, including 27 endangered bird species, as well as endemic plants… Lake Seyfe in central Türkiye’s Kırşehir province has turned into a salt flat since July following a severe lack of precipitation…”

“Record heat non-stop in Turkey with temperatures over 40C [104F] every day:

“Today the city of 38.7°C Samsun on the Black Sea coast rose to 38.7C,its hottest September day on records. Very hot also in Georgia with 37.0C at Kutaisi.” 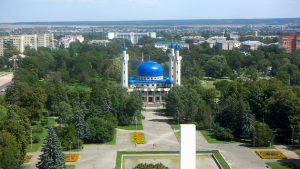 “Hot also on the coast at Sochi with 34.5C. Tomorrow the heat will move to Chechnya and Dagestan.” 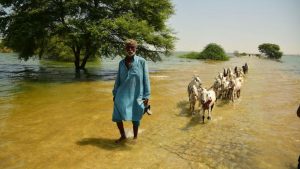 ““Super floods” in Pakistan have left 3.4 million children in need of “immediate, lifesaving support,” according to UNICEF.

“The floods — caused by record monsoon rains and dubbed by one minister as “the worst humanitarian disaster in a decade” — have impacted 16 million children in total, UNICEF’s Pakistan Representative Abdullah Fadil said following his visit this week to the country’s southern Sindh Province.” 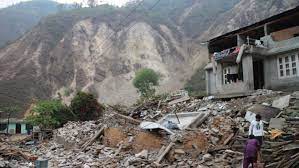 “A landslide triggered by heavy rains has killed at least 22 people and injured 10 in western Nepal.

“Rescuers battled against torrential rains to pull out bodies from the wreckage of homes buried by a landslide. Police spokesperson, Dan Bahadur Karki, said the latest calamity occurred in Achham district, about 450 km (281 miles) west of the capital city of Kathmandu.” 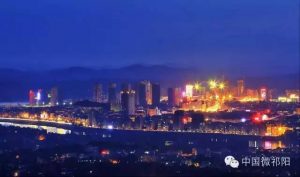 “In South Korea and Japan still hot and humid nights and days with temperatures again above 35C. Temperatures will remain very high for a couple of more days. Humidity will be extreme.” 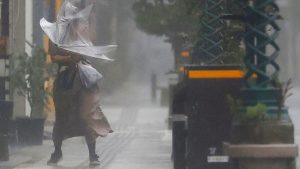 “More than 7 million people urged to take refuge as Typhoon Nanmadol hits south-west of country… The storm officially made landfall at about 7pm local time… It was packing gusts of up to almost 150mph and had already dumped up to 500mm of rain in less than 24 hours on parts of the south-western Kyushu region.” 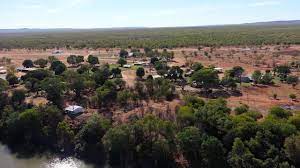 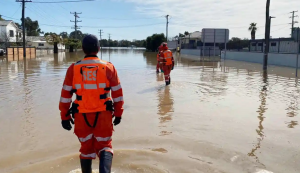 “Farmers in north-west New South Wales are preparing to be cut off after the Namoi River broke its banks, inundating rural towns and sparking several flood rescues.

“The Bureau of Meteorology has issued flood warnings for the river, including major flooding at Wee Waa and Gunnedah after the river peaked early on Sunday.” 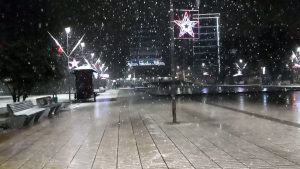 “A historic snowfall was recorded in the city of Osorno, where real snow accumulation (not snow pellets/graupel) is extremely rare and almost unheard in the city center. Some cm of snow covered parts of the city.” 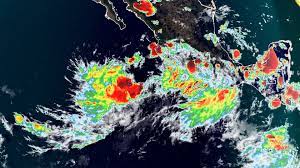 “The outer bands of the storm are expected to interact with the remnants of Tropical Storm Lester and produce torrential downpours. More than 10 inches of rain are possible in Guerrero, Michoacán and Oaxaca.” 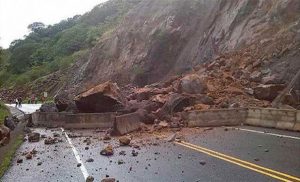 “At least three people have died and 25 have been injured in a landslide caused by heavy rains during the last hours in Cambronero, in western Costa Rica, as confirmed by the Red Cross.

“…among the injured there are 19 in stable condition, while one is in critical condition and five others are in serious condition. “Work continues at the scene,” it added.”

“Torrential rains in Guadeloupe in the Caribbean, being battered by tropical storm Fiona with accumulations up to 483 mm [19 inches] in 24 hours.”

“The storm was causing “catastrophic flooding” in Puerto Rico early on Sunday evening, the National Hurricane Center (NHC) said. Several landslides had been reported, government officials said. The storm forced the closure of roads while a highway bridge in Utuado town in the island’s center had been washed away by a flooding river.” 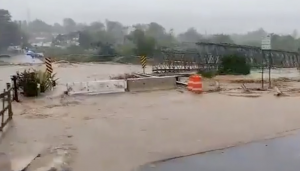 “Vast amounts of damage is being reported across the island of Puerto Rico after Hurricane Fiona came ashore on Sunday afternoon.

“Roads were turned into raging torrents while even newly constructed bridges following Hurricane Maria in 2017 were washed away. Earlier on Sunday, President Joe Biden gave approval for a state of emergency to be declared.” 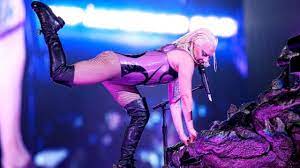 “Lady Gaga has cut short her final Chromatica Ball world tour performance in Miami after a lightning storm forced her from the stage.

“The Born This Way singer shared an emotional video on Instagram, apologising to her 53 million followers and telling them it wasn’t safe for the show to carry on as “even when the rain sort of stopped there was lightning that was striking right down to the ground, so close to us”.” 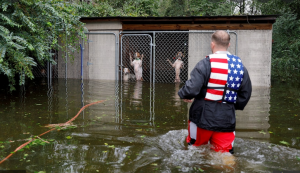 “Six years after Hurricane Matthew tore through North Carolina, hundreds of residents are still waiting for their homes to be rebuilt…

“Waiting on an unfinished modular home in nearby Pikeville, Mr Artis is among hundreds of low-income homeowners enrolled with the North Carolina Office of Recovery and Resiliency who are living in temporary accommodations years after the 2016 storm and Hurricane Florence in 2018.” 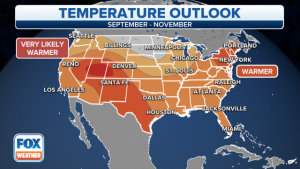 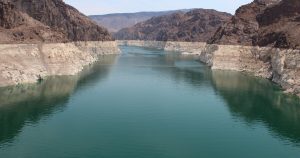 “The Colorado River is drying up — but basin states have ‘no plan’ on how to cut water use.

“One month after states missed a federal deadline to propose ways to drastically cut their use of water supplied by the Colorado River, water managers who met for a seminar in Grand Junction said they still didn’t have comprehensive solutions ready to help bolster the imperilled river system.” 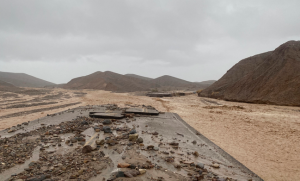 “”Need more proof it’s been a crazy summer for weather and travel? Look no further than Death Valley National Park… “Road crews are exhausted from clearing, and then re-clearing, the same sections of roads,” the NPS release said.” 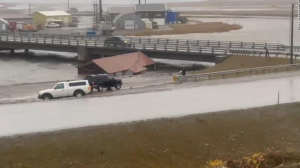 “For years, scientists have expressed concern that climate change has set the stage for greater impacts from large nontropical cyclones in Alaska. Warmer summers and oceans have caused a greater-than-normal seasonal loss of sea ice, which makes the region more vulnerable to ocean inundation.”