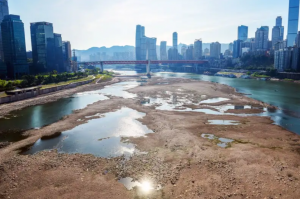 “Hottest summer on record for Europe and China during Northern Hemisphere’s 2nd-hottest summer.

“The summer of 2022 was the hottest on record for Europe and China, the second-hottest for North America and Asia, and the fifth-hottest June-to-August period for planet Earth since record-keeping began in 1880, NOAA’s National Centers for Environmental Information (NCEI) reported September 14.

“NASA ranked June through August as tied with 2019 for the warmest on record globally.” 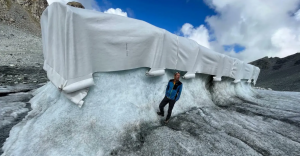 “Last Month Was the Hottest August Yet in North America and Europe.

“The extreme weather and high temperatures that dominated August, evaporating rivers and eliminating ice, pushed the month to record-breaking status for both Europe and North America, according to a new report from the National Oceanic and Atmospheric Administration.” 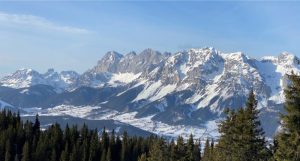 ““There will be no autumn or winter skiing on the Dachstein this year,” Georg Bliem, the director of Planai-Hochwurzen-Bahnen told Kleine Zeitung on Wednesday. For years now, the glacier has been steadily melting in summer. The year 2022 has been no exception…” 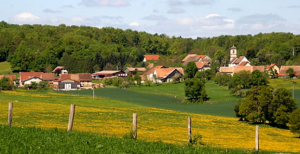 “Another record fell in this European warm spell:

“The minimum temperature at Fahy in Switzerland, located at 598m above sea level, was 19.4C [66.9F]; the highest ever recorded in September (data from 1981). Quite remarkable considering we are in the middle of the month.” 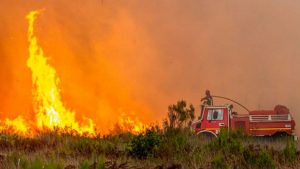 “A wildfire raging since Monday in southwestern France prompted authorities to evacuate an extra 500 people on Wednesday, bringing the total to over 1,000 in an area already hit this summer by huge blazes.” 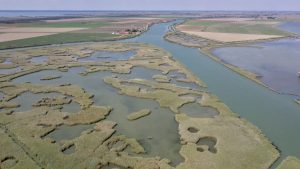 “At least 20,000 hectares of farmland along the Po River, Italy’s longest waterway, are facing crop failure caused by the worst drought in decades across the European continent this summer. The runoff of the Po, located in northern Italy, has dropped to historic lows, allowing sea water to enter the river system.” 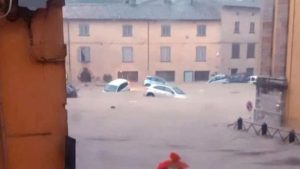 “Several people are missing [at least eight dead] and dozens of vehicles have been swept away as catastrophic floods hit Italy’s Marche region following SIXTEEN inches of rain in just seven hours.

“Cantiano recorded the huge amount of rain, the second worst on record for Italy behind Liguria region’s 496mm (19 inches) of rain in six hours at Montenotte in October 2021… It is the latest in a long series of extreme-weather events which have happened in Italy this summer. The total number is 1,642 this summer… five times the amount of a decade ago.”

“Areas that had already been devastated by summer fires have now been hit with severe flooding and landslides. The intense rain that fell during the early hours of the morning dragged land and debris from burned areas of Serra da Estrela and caused damage in the parish of Sameiro, Manteigas, according to civil protection and municipal sources.” 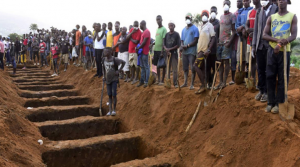 “The heavy floods that hit the country do not seem to have any respite. After the rains recorded several times in August 2022 (see Fides 2/9/2022), there are new losses caused by the disastrous torrential rains of September 10 in the western region of Sierra Leone.” 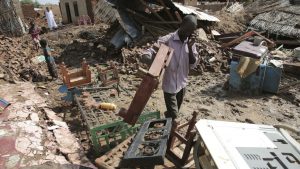 “At least 130 killed in floods in Sudan…

“The National Council for Civil Defence said the floods have killed a total of 134 people, left 120 others injured, and damaged or destroyed more than 128,000 homes so far this wet season. Water can be seen engulfing villages and roads in footage of the flooding aired on state television.” 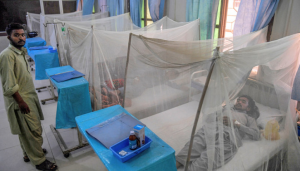 “Aid organizations say more medicine is urgently needed to stop the spread of waterborne diseases after the flooding. Pharmacies are out of painkillers, antibiotics, and medicines for skin and gynecological issues, diabetes and eye infections.” 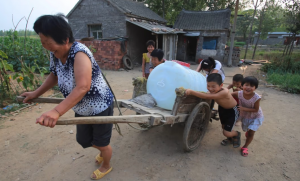 “South Central China’s Hunan province, one of the nation’s top rice producing areas, is expected to suffer severe drought in the early fall as no rain and higher-than-average temperatures are forecast for the next 10 days, according to the local water resources department.” 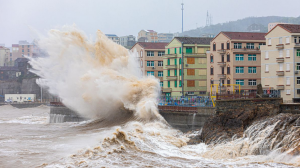 “After passing through the Japanese Ryukyu Islands, typhoon Muifa has made a landfall near the city of Shanghai in China.

“Weather is SE China south of its landfall will be extremely hot for many days and we can’t exclude temperatures returning near 40C [104F] in Fujian Province.” 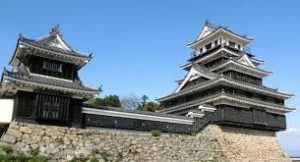 “Another terribly hot day (and night) in Japan with minimum temperatures up to 29C and dozens of stations above 35C [95F].

“More records were set of both highest Tmins and Tmaxes in the past 2 days. Unprecedented heat for mid-September. See list below by JMA.” 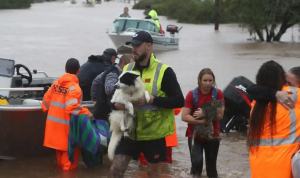 “Northern Rivers residents are learning to use chainsaws, sandbag their homes and clear landslips safely as communities band together to ensure they are prepared for future natural disasters after this year’s devastating floods. Their efforts have a new sense of urgency after the Bureau of Meteorology declared a La Niña event is under way…” 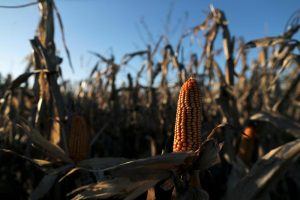 “The vast Pampas plains of the South American nation are hitting the start of the corn planting season after almost no rainfall in some four months. Forecasts predict more dry weather ahead with scarce showers… Argentina is the world’s top exporter of processed soy oil and meal and an important producer of corn, wheat and barley.” 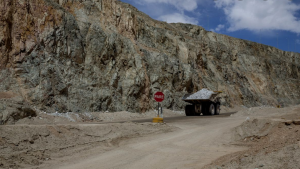 “In Brazil climate change is threatening crop loss and productivity, while changes in rainfall, heat waves and droughts are upsetting grain production and trade in Argentina, the report added… while water stress is complicating Chile’s mining, agriculture and hydropower operations, said Moody’s.” 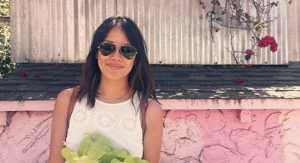 “A 33-year-old travel manager who suffered debilitating chest pain and weight loss was eventually diagnosed with life-threatening fungal infection Valley fever that is spreading across America.

“Desiree Chan, who lives in Los Angeles, was struck by the pain as she got out the bath just before New Year’s Eve in 2020… Valley fever is spreading in the United States thanks to climate change, with cases doubling to 20,000 annually over the last five years.” 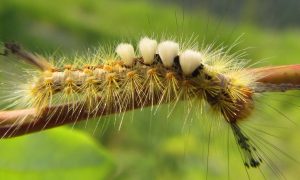 “The concern, officials said, is that defoliation weakens the trees, making them vulnerable to subsequent attacks by bark beetles that may kill the treetops or even entire trees… Officials also warned that people should avoid touching or handling the insects.” 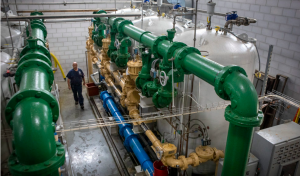 “This summer has been particularly brutal, they say. It has made many people in the water industry wonder whether it’s time to fundamentally rethink how cities and towns provide this service to residents and businesses. “We are getting to a breaking point”“. 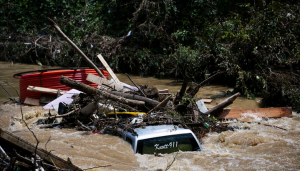 “At his weekly press conference, Gov. Andy Beshear confirmed there are 40 confirmed dead due to July’s historic flooding in Eastern Kentucky… All drinking-water systems are now operational; 22 systems were down immediately after the flooding.” 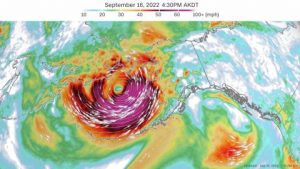 “Alaska is facing its strongest storm in over a decade.

“That 2011 Alaskan storm, with wind gusts over 90 mph, left behind a wide swath of destruction. Like Merbok, the 2011 system was an extratropical storm… This week’s storm will not only rival the 2011 event but is expected to reach a magnitude unlike any other for the month of September.”

“Arctic sea ice extent was down another 29k km² today and has not yet had a day of net refreeze. 2012 is the only year in JAXA’s series still competing by these terms. 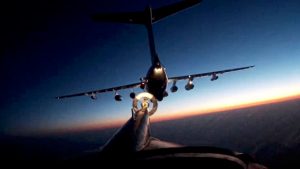 “A fleet of 125 military air-to-air refuelling tankers would release a cloud of microscopic sulphur dioxide particles at an altitude of 43,000ft (13km) and a latitude of 60 degrees in both hemispheres, slightly shading the Earth’s surface beneath.” 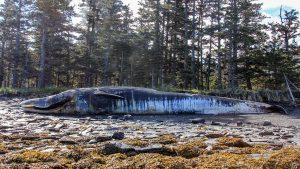 “Marine heat waves are on the rise… Climate change is causing intense warming of Earth’s oceans more often and for longer, posing big risks to the animals and plants that live there…

“A 2020 study in the journal Science concluded that marine heat waves have increased more than 20-fold as a result of climate warming.” 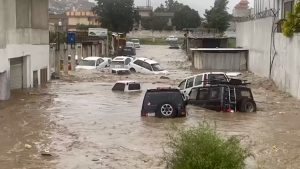 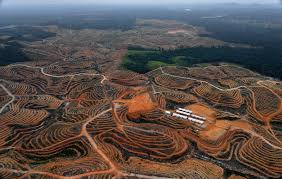 ““The modeling showed that land mammal food webs have degraded much more than would be expected if random species had gone extinct,” Fricke said. “Rather than resilience under extinction pressure, these results show a slow-motion food web collapse caused by selective loss of species with central food web roles.””