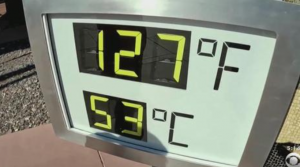 “The national park, famous for being one of the hottest places on the planet, set a new record for the hottest September day anywhere on the planet when its Furnace Creek thermometer hit 127 degrees on Thursday.” 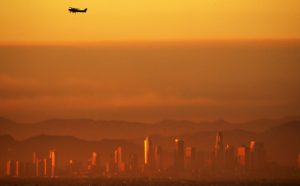 “On Saturday, numerous cities in the Intermountain West endured their highest temperatures on record not only for Sept. 3 but for the entire month. Salt Lake City (which hit 103 degrees), Pocatello, Idaho, (102 degrees), and Great Falls, Mont. (102 degrees) were among them [Reno at 104F, too].” 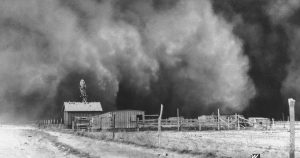 “US feels heat as 26 cities report hottest summers ever — on par with 1936 Dust Bowl.

“Data from the Southeast Regional Climate Center (SERCC) showed the average temperature nationwide was around 74 degrees, putting it on par with summer 2021 and the 1936 Dust Bowl. Persistent heat waves made 26 cities across the US — including: Newark, NJ; Tampa; Salt Lake City; San Antonio, Texas, and Cheyenne, Wyoming — report their all-time warmest summers.” 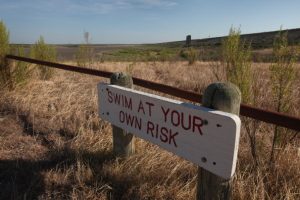 “DRIED UP: Texas cities in fear of running out of water…

“Texas’s situation is sufficiently dire that in July, a majority-Republican panel on the state legislature voted unanimously to require the state water planning board to consult with the state climatologist as it advises cities in planning to meet the state’s water needs in the future.” 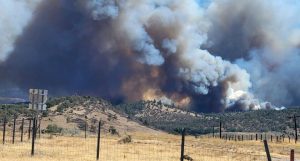 “The lightning speed with which the Mill fire — fueled by extreme heat and winds — swept into a residential community and caused such destruction underscores the growing toll of wildfire in California. It is the latest fire — coming after blazes in wine country, Paradise, Greenville and elsewhere — to bring major property losses inside established communities.” 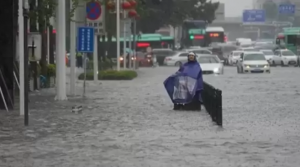 “Portions of Chattooga and Floyd counties have received 10-13 inches, with more rain coming. These amounts have resulted in catastrophic flash flooding and a Flash Flood Emergency continues in that area,” the National Weather Service office in Atlanta said Sunday.” 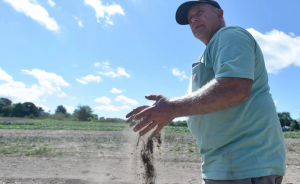 “Parched Cape feels effects of ‘critical’ drought: ‘This is the driest I’ve seen it’…

“”I’ve never experienced it like this,” he said, sounding tired — tired of the long stretches of heat, tired of watching his crops fail to thrive, tired of losing his tomatoes to wildlife desperate to fill their dry mouths with moisture.” 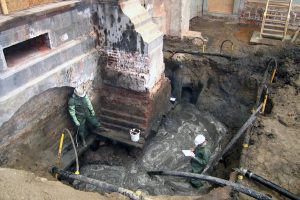 “Like most buildings built before 1970 in this marshy country, the Netherlands’ national museum rests on a foundation of wooden poles – about 8,000 of them. But as dry summers caused groundwater levels to plunge, the poles were exposed and fungi began to rot the foundations.” 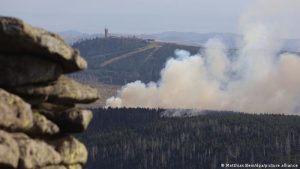 “Hundreds of tourists were evacuated after thick smoke engulfed an area south of the summit of the Brocken mountain. Located in the Harz National Park, the area has seen several wildfires this year.” 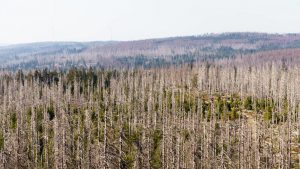 “This is is a report of the shocking experience we had while visiting the Harz national park in Germany, now two weeks ago.

“We wish to share the devastating effects of climate change on the spruce tree forests in the Harz that we witnessed from a front row seat.” [Well worth a watch.] 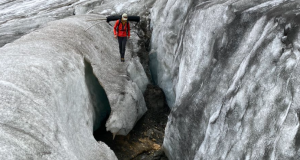 “A glaciologist left speechless on Griesgletscher [Swiss Alps, near the border with Italy]: In the middle of the ice, the bedrock is visible in a crevasse.

“In only very few years from now, the ice will be gone here, thus splitting the glacier in two parts. The agony of a glacier!” 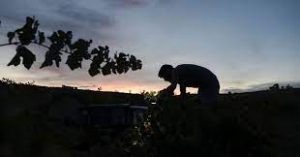 “Forced to start harvesting a few weeks earlier in the season due to brutal summer temperatures and drought influenced by climate change, some Spanish vineyards such as this family business outside Madrid have also switched to nighttime grape picking to avoid working in the sweltering August heat.” 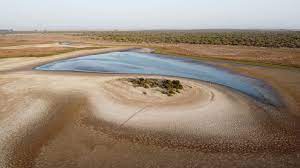 “The last permanent lagoon of Doñana [Andalusia, Spain] dries up due to drought and overexploitation of aquifers.

“The lagoon of Santa Olalla, the largest permanent lagoon in Doñana and the last one that has maintained water in August, “has ended up drying up” and these days “has been reduced to a small puddle in the center, where waterfowl no longer come”, as warned by the Higher Council for Scientific Research.” 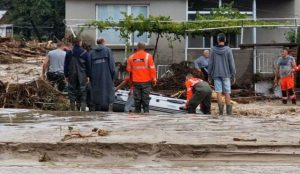 “Floods in Bulgaria: Karavelovo without Electricity and Water, Bogdan Cut Off from the World, Volunteers are Helping.

“48 hours after the water disaster that befell the villages along the Stryama river, the situation remains dire. The huge amount of rain, which literally flooded several villages in Karlovo region, destroyed agricultural production and forced the evacuation of people, reports BNT.”

You can see footage of that here: 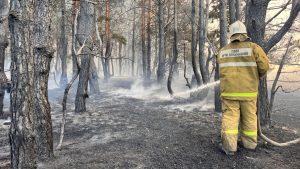 “One rescuer was killed in a huge forest fire spanning up to 43,000 hectares in northern Kazakhstan, RIA reported on Sunday, citing the Ministry of Emergency Situations. The wildfire broke out in Kostanay Province on Friday and spread quickly…” 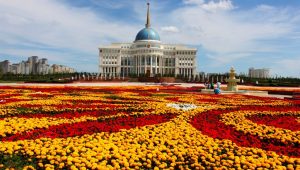 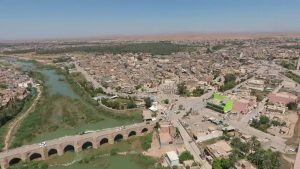 “It’s not just Western USA, but also the usual suspects Middle East and North Africa are boiling this first days of September. 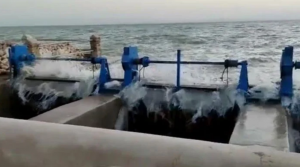 “Pakistan authorities breach lake to save other areas from floods…

“Authorities in flood-hit Pakistan have breached the country’s largest freshwater lake [Lake Manchar], displacing up to 100,000 people from their homes but saving more densely populated areas from gathering flood water, a minister said.” 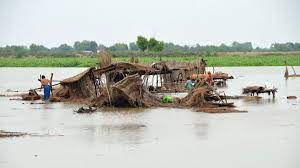 “The World Food Program warns the catastrophic floods in Pakistan are exacerbating the food crisis in neighboring Afghanistan, where nearly half the population – is facing acute hunger…

“Several provinces in Afghanistan also have been hit by heavy rains and severe flooding in recent weeks. The United Nations reports thousands of homes and large areas of farmland have been destroyed.” 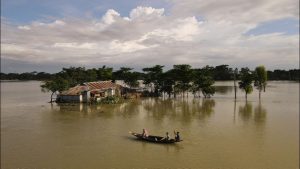 “Unprecedented floods in Bangladesh have affected around 7.2 million people. Since Bangladesh is dependent on India for the import of oils, cereals, iron, steel and so on, annual floods affect the purchasing power of the nation, leading to an economic balance between Bangladesh and India.” 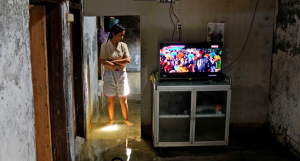 “Everything has gone. The Indonesians living in flooded homes…

“On the northern coast of Central Java, Indonesia, villages are hit hard as sea levels rise, one of many effects of climate change. The occupants have had to raise their houses by several feet with cement or earth so that seawater does not come in. Others can only be accessed when the tide is low, trapping people inside for hours at a time.” 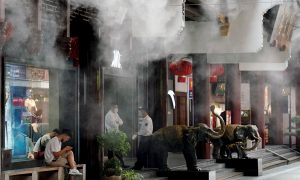 “The no-heat wave days in China were only 2: On 3rd September the heat re-started both in the SE (monthly record at Chongwu in Fujian with 35.5C / 96F) and in the NW where Turpan (Xinjiang) will be above 40C / 104F for several days.

“Another extremely hot month ahead for China?” 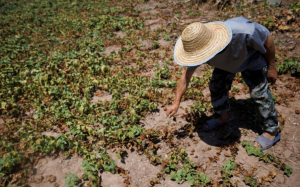 “Empty Peanut Shells Are the Latest Casualty of China’s Drought… 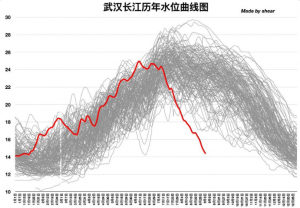 “The water level of the Yangtze River in Wuhan has reached an unprecedented low point in the same period in more than 150 years!”

“A wing dam was exposed in the Yangtze River near Yingwuzhou Yangtze River Bridge due to few rainfall and continuous high temperatures in Central China’s Hubei Province recently.” 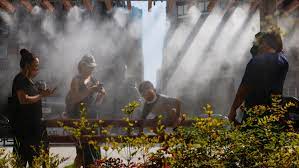 “The Meteorological Agency released a report based on data from June to August. It says the average temperature was 0.91 degrees Celsius warmer than usual. The figure is the second-highest since record-keeping began in 1898. The highest was in 2010.” 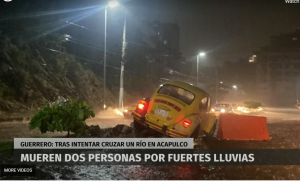 “Three dead, including a minor, is the balance left by the heavy rains on Saturday night and early Sunday morning in Acapulco, Guerrero.

“In addition, landslides are reported on roads in three municipalities, as well as a fallen tree and two collapsed walls… Flooding was also reported in avenues and streets of the port, leaving vehicles stranded by heavy rainfall in this tourist destination.” 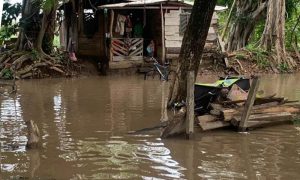 “Locals were affected by an intense downpour and a thunderstorm, which caused major flooding. Flooded streets, trapped cars, and roofless houses are some of the events reported on Friday afternoon. Authorities estimate that the phenomenon lasted about one hour and caused a very intense rainfall in a very short period.” 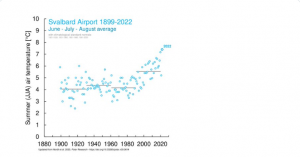 “Svalbard Airport had its warmest Arctic summer (JJA) in a series which runs from 1889… Also the Arctic research station Ny-Ålesund had its warmest summer on record. The same had our remote weather station at Isfjord Radio…

“The warm summer has, among other things, contributed to very large glacier melting on Svalbard.” 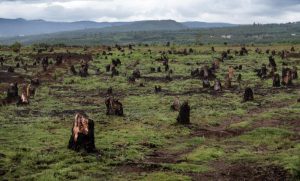 “Globally, 35 percent of forests have been lost in the past 300 years. Of those that have survived, 82 percent have been compromised by human activity… From 2015-2020, an estimated 10 million hectares worldwide were deforested each year.”