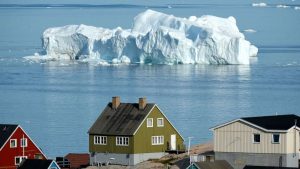 “Major sea-level rise from the melting of the Greenland ice cap is now inevitable, scientists have found, even if the fossil fuel burning that is driving the climate crisis were to end overnight.

“The research shows the global heating to date will cause an absolute minimum sea-level rise of 27cm (10.6in) from Greenland alone as 110tn tonnes of ice melt. With continued carbon emissions, the melting of other ice caps and thermal expansion of the ocean, a multi-metre sea-level rise appears likely.”

“The Arctic is no stranger to loss. As the region warms nearly four times faster than the rest of the world, glaciers collapse, wildlife suffers and habitats continue to disappear at a record pace. Now, a new threat has become apparent…” 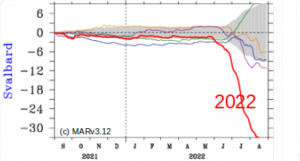 “The current 2021-2022 surface mass balance anomaly over Svalbard is incredible: close to 2 times larger than previous record, 4 times larger than the 1981-2010 interannual variability [In simple terms, its glaciers are melting like crazy]…

“…out of any statistically likely anomaly without global warming” 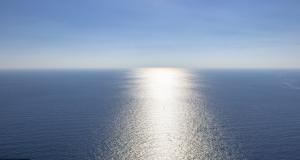 “Sunday marked highest sea surface temperatures on record for North Atlantic according to Climate Change Institute at University of Maine.

“Meanwhile, strongest 2nd year of a La Nina continues based on NOAA MEI. Definitely a strong Tropical Cyclone season right? NOPE! Only 1988 had a lower ACE on this date.” 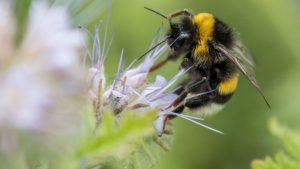 “Climate change is triggering early spring across North America and prematurely waking bumblebees from hibernation before flowers have bloomed – leaving many without food and threatening their survival, a new study has found. 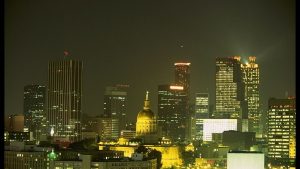 “Summer nights in the South [US] are getting hotter, quicker.

“Nighttime temperatures have risen faster than daytime temperatures across the Southeast during the region’s warmest decade on record, creating unrelenting heat waves that can have serious consequences for vulnerable people, farm animals and crops — including death.” 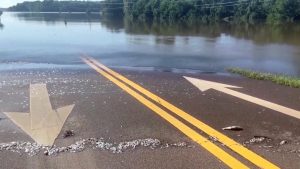 “Floods inundate Mississippi, but not a drop to drink – “The water is not safe to drink, and I’d even say it’s not safe to brush your teeth with””.

“JACKSON, Miss. — Mississippi’s capital city is grappling with multiple water problems — too much on the ground after heavy rainfall in the past week, and not enough safe water coming through the pipes for people to use.” 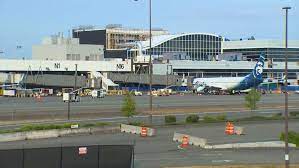 “For a brief moment in the 3 p.m. hour, Seattle-Tacoma Airport hit 90 degrees which makes this the 12th day this year reaching 90 officially, tying the record from 2015.

Wednesday will be almost as warm, but with a weak disturbance aloft moving through. A few high clouds could cut down the temperature a degree or two.” 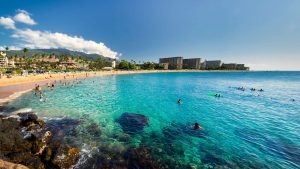 “On Thursday, Maui hit its seventh record-high temperature for August – a scorching 94F in Kahului, located on the north side of the island.

“Over the summer, the island has been seeing very little rainfall, causing “lower recharge of the island’s aquifers,” according to a press release by the Department of Water Supply.” 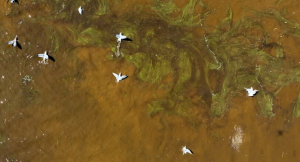 “One of the largest algae blooms in recent memory in San Francisco Bay could intensify with the arrival later this week of what promises to be the longest, most intense heat wave of the year — creating perfect conditions for the toxic organisms to potentially kill even more fish across the bay…”

“Death Valley is currently forecast to peak at 126°F (52.2°C) on Saturday, which would tie the highest temperature ever recorded on Earth in the month of September. This is going to be a heatwave for the ages in California.” 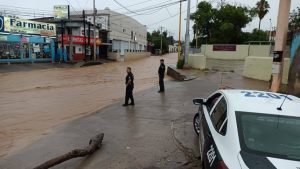 “Sonora, Mexico, goes from extreme drought to floods: there are 13 dead.

“In just two months, Sonora went from a crisis due to severe and extreme drought, to suffering floods that have forced the dams to be released and have caused the death of 13 people.” 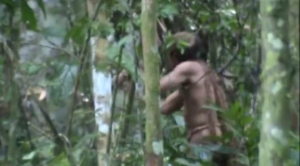 ““No outsider knew this man’s name, or even very much about his tribe — and with his death the genocide of his people is complete,” Fiona Watson of the organization Survival International, a global movement for tribal peoples, told CNN.” 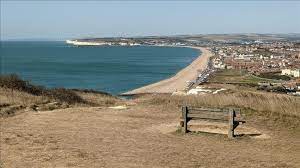 “Britain is facing a shortage of pumpkins this Halloween as growers warn poor weather has reduced their harvest by as much as a third. Supermarkets are already grappling with the fall-out from this year’s drought…” 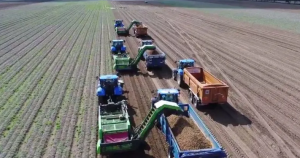 “French potato production experiences a historical collapse due to drought and extreme heat.

“As reported by the French Potato Producers’ Group, UNPT, “the latest samples, to date, confirm the historical deterioration of the yields of the plots dedicated to potatoes by at least 20% compared to the average of the last twenty years, that is, 1.5 million tons lost (40,000 hectares in terms of the surface).” 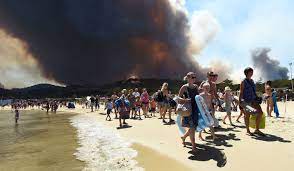 “Summer 2022 has been second hottest since records began in France.

“This summer in France has been the second hottest on record and the hottest since 2003 [that was an El Nino year; this is a La Nina], national weather service Météo-France has reported. “Not only have hot extremes been frequent, but there have been no really cool days nationwide since early July,” the service stated.” 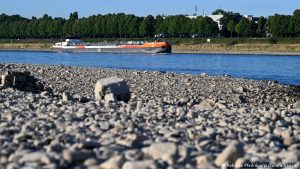 “Germany has had its sunniest summer on record, according to the country’s weather service. Temperatures and lack of rainfall in 2022 were also more extreme than usual, pointing to how summers might look in the future.”

“Low Water Levels Disrupt European River Cruises, a Favorite of U.S. Tourists… One of Europe’s worst droughts in decades has left the water level of parts of the Rhine and the Danube rivers too low for ships to pass… “River cruising is a multibillion-dollar industry…” 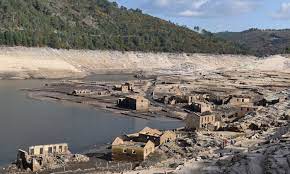 “The climate crisis has left parts of Spain at their driest in more than 1,000 years and winter rains are expected to diminish further, a study published in July by the Nature Geoscience journal showed.” 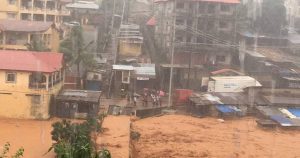 “At least eight people have been killed and hundreds displaced in the Sierra Leonean capital Freetown after a landslide and flooding caused by heavy rains continued on Monday, rescue workers said… President Julius Maada Bio blamed the calamities on climate change but also on poor urban planning.” 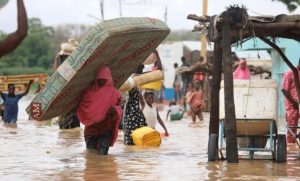 “The landlocked Sahel state’s annual rainy season typically runs between June and August or September. But in recent years, rainfall has become more intensive, accelerating the risk of deadly flooding in shantytowns.” 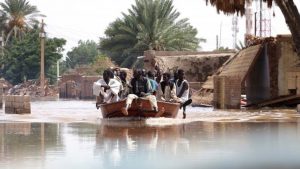 ““It’s one thing to have such devastating floods every 100 years, but in Sudan, we are seeing these floods happening more regularly and more ferociously. We can’t just expect families to be able to bounce back year after year, flood after flood.”” 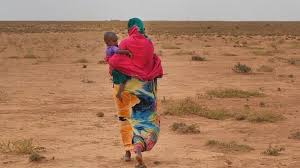 “Fifth Consecutive Year of Drought Forecast for Horn of Africa.

“The World Meteorological Organization warns millions of people in the greater Horn of Africa will likely face a fifth consecutive season of insufficient rains. According to the U.N. weather agency the terrible four-year long drought in the Horn of Africa is set to continue for another year.” 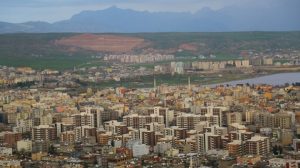 “An intense and long heat wave is underway in the Caucasus, Middle East and Central Asia. Yesterday Cizre in Turkey rose to 45.3C [113.5F].

“In the next days, some September heat records will be challenged in several countries specially in Russia, Georgia and Kazakhstan.” 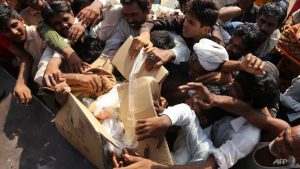 “Half a Million Forced Into Camps as Floods Ravage Pakistan.

“Pakistan’s unprecedented flooding has forced nearly half a million people to leave their homes and move into relief camps as international aid starts to trickle in to help the South Asian nation already battling an economic crisis.” 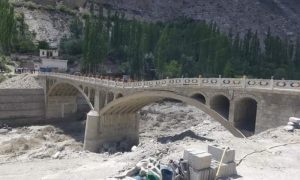 ““We have the largest number of glaciers outside the polar region, and this affects us,” Pakistan’s climate minister Sherry Rehman told the Associated Press. “Instead of keeping their majesty and preserving them for posterity and nature,” she said, “we are seeing them melt.”” 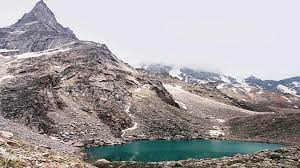 “India, particularly northwest India, recorded a severe prolonged spell of heat extremes between March and May this year. The March-April spring heatwave spell in India and Pakistan was about 30 times more likely to happen because of human-caused climate change…” 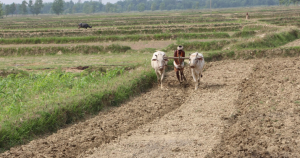 “For Nepal’s ailing economy, the shortage of chemical fertiliser, drought-like situation in the southern Tarai and the subsequent heat wave is a big problem. Bir Bahadur Chaudhary, a farmer in Dhangadhi, predicts a significant cut in paddy output this year.” 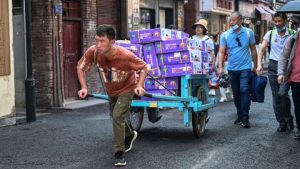 “China Heat Wave day #80:The intense heat is now squeezed in the provinces of Guangxi, Zheijiang and Fujian with temperatures reaching 40.7C [105.3F] at Lishui.

“Tomorrow the heat will ease but persists in Fujian one more day, ending this historic heat wave, but it might resume in few days.” 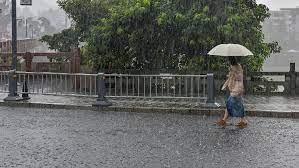 “Rain across central China this week is expected to relieve the country’s worst heatwave on record, but weather agencies are now warning of potential floods, while analysts say the energy crisis exacerbated by the months-long drought is not over.” 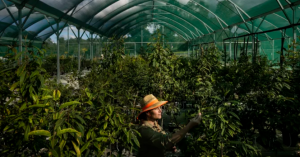 “Another wet Sydney summer isn’t just bleak — it could wipe out an entire species.

“The Royal Botanic Garden is racing to save entire plant species at risk of extinction from diseases that thrive in the rain, as Sydney faces the bleak prospect of another long, wet summer.”

“Floods, other water-related disasters could cost global economy $5.6 trillion by 2050 -report [I’m not sure this line of analysis is sufficiently, er, expansive…]

“Worsening droughts, storms and torrential rain in some of the world’s largest economies could cause $5.6 trillion in losses to the global economy by 2050, according to a report released on Monday.”