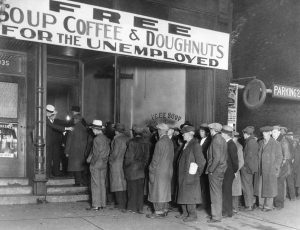 “The worldwide economy contracted in April-June, according to the International Monetary Fund, with Yoshimasa Maruyama at SMBC Nikko Securities estimating that global GDP fell by 2.7%.

“The U.S., Germany, the U.K. and China saw negative growth. The U.S. is now in a recession according to a narrow technical definition after its GDP fell for a second quarter in a row. The U.K. will enter into a recession in October-December and experience a contraction through 2023…” 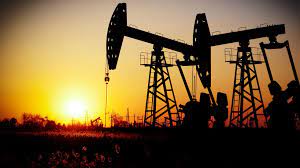 “A barrel of Brent crude fell by about 5% to below $94 (£78) on Monday, hitting the joint lowest levels since the Russian invasion of Ukraine as traders reacted to weaker figures from the world’s second-largest economy.” 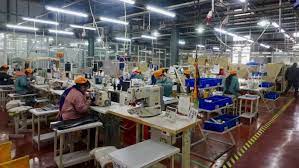 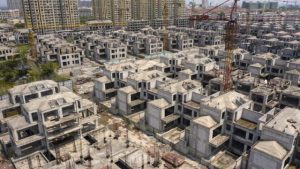 “The Chinese dream of homeownership is crumbling. The economy could go with it…

“What was once a virtuous cycle has turned vicious. Home prices fell for the 11th straight month in July, and dozens of developers, including real estate behemoth Evergrande Group, have defaulted on their debts. The impact has rippled through land sales, labor, construction materials and home appliances.” 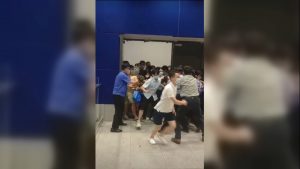 “Video shows guards struggling to hold people behind double-doors leading to the Xuhui district of Shanghai before the crowd breaks past them and rushes through the opening.” 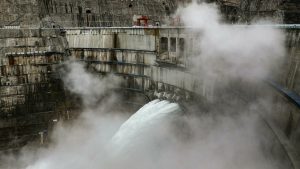 “Chinese lithium hub Sichuan province will ration electricity supply to factories until Saturday… as a heatwave sends power demands soaring and dries up reservoirs. Temperatures in the province – home to nearly 84 million people – have hovered above 40-42 degrees Celsius (104-108 degrees fahrenheit) since last week.” 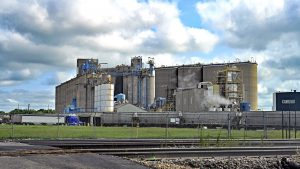 “The New York Fed’s Empire State business conditions index, a gauge of manufacturing activity in the state, plummeted 42.4 points to negative 31.3 in August, the regional Fed bank said Monday. This is the second largest monthly decline on record and among the lowest levels in the survey’s history…” 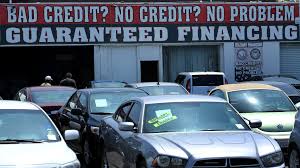 “It Sure Feels Like a Car Loan Crisis Is Coming [US]…

“…from the looks of it, more and more people are falling a month or two behind on their auto loans, but they are not letting the delinquencies lead to defaults. That’s a good thing. As for if this behavior is sustainable? That’s sort of anyone’s guess. Remember 2008, when everyone was unable to pay their mortgage? Feels familiar to me.” 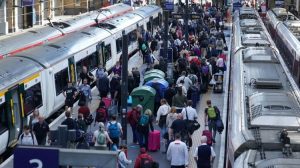 “Regular wages, excluding bonuses, plunged an average of 4.1% on the year in the three months to June when inflation is taken into account, according to the Office for National Statistics (ONS).” 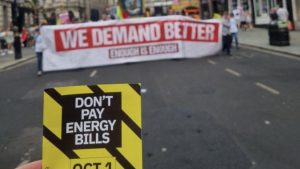 “Protests Against Soaring Energy Bills Spread Through UK, and CEOs Are Taking Notice.

“…A grassroots initiative, “Don’t Pay,” urges consumers to just stop paying energy bills… Nearly 170,000 people have so far pledged to stop paying their energy bills in October… “It shows just quite how fed up people are.”” 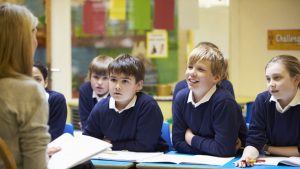 “A chief executive of one of the leading academy trusts in the country said: “Shorter school days, fewer after-school clubs and enrichment opportunities and draconian restrictions on energy usage will become a reality for all trusts and the situation is particularly challenging for smaller trusts and standalone schools,” the Mail confirmed on Sunday, August 14.” 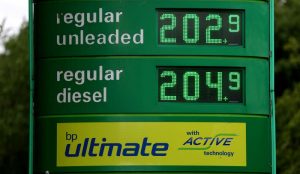 “Winter diesel shock looms as tanks dry up ahead of sanctions [Europe].

“Europe is heading into winter with seasonally low levels of diesel in storage tanks, with major implications for the continent’s industries and drivers in the run-up to EU sanctions on Russian crude oil and refined product supplies.” 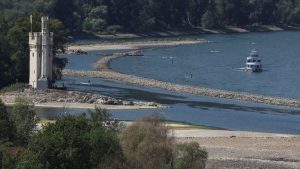 “European benchmark gas prices rose by 2% early on Monday as demand is high in a heatwave and supplies of other fuels for power generation is constrained by low water levels on Europe’s main petroleum transport corridor [ie the Rhine].” 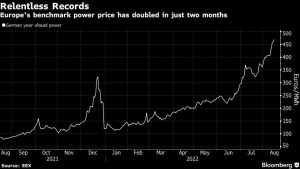 “Next-year electricity rates in Germany advanced as much as 3.7% to 477.50 euros ($487) a megawatt-hour on the European Energy Exchange AG. That’s almost six times as much as this time last year, with the price doubling in the past two months alone.” 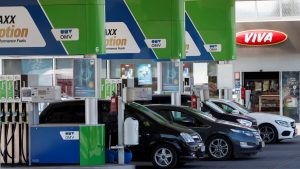 “At the moment we cannot guarantee the quality of fuel supply at petrol stations that consumers were used to before,” Ottó Grád, secretary general of the Hungarian Mineral Oil Association, told ATV. In recent months, we have had to live with the fact that there are shortages of certain types of product at the wells or that fuel is not available at all at the given petrol station.”

““There is no hope: Whoever is optimistic that there would be electricity in the winter will be sobered by this video. There is no coal,” Dragoslav Ljubičić wrote on Twitter. To support his claim, he added a video of the coal stockpile at TENT A, Serbia’s biggest thermal power plant, where he works since the early 1990s.” 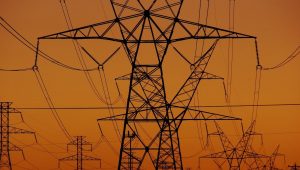 “Kosovo Walks Back Power Cutoffs To Consumers Amid Energy ‘Emergency’.

“Kosovar authorities say electricity supplies have resumed as normal after its main power distributor announced periodic brownouts starting on August 15 that it blamed on high import costs and production woes. Nonetheless, officials in the Balkan state signaled that there would be challenges ahead as a result of the current “energy crisis and state of emergency.”” 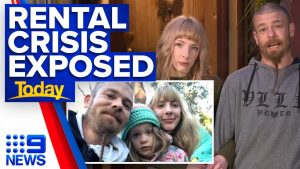 “A South Australian family forced to ration food and fuel amid Australia’s spiraling rental crisis and soaring cost of living, says they no longer recognise the country.

“David Fairhead and Wynona Reilly, from Kangarilla south-east of Adelaide, have been rejected from almost 100 rentals following the death of their previous landlord.” 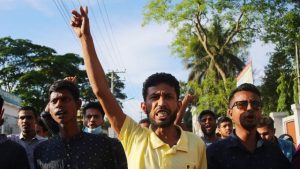 “Prices of essentials rose by up to 14 per cent in a week in Bangladesh after the country witnessed a record hike fuel price recently, immediately affecting the transport sector, sparking street protests.” 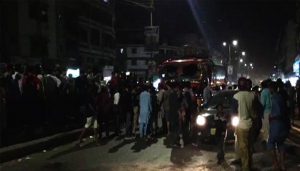 “Karachiites facing electricity loadshedding of up to 14 hours.

“The duration of electricity outages in Karachi has exceeded from four hours to 14 hours, making lives miserable for the citizens. Citizens living in the exempted areas are also suffering prolonged power outages. After every three hours, loadshedding duration continues for about three to three-and-a-half hours.” 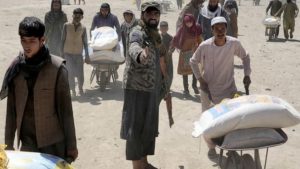 “One year on from the Taliban takeover, Afghans face starvation – and winter is coming…

“In the last 12 months, there has been very little relief from the severe financial sanctions put in place by the international community in response to the Taliban takeover. Central bank reserves remain frozen and long-term development assistance largely suspended.” 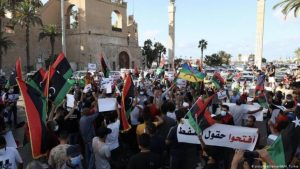 “A fresh wave of protests has recently erupted in southern Libya, organized by the so-called Fezzan Anger Movement, which consists of a group of youth and tribesmen who claim an uprising is necessary to enable the residents of southern Libya near the troubled countries of Chad and Niger, to obtain their rights.” 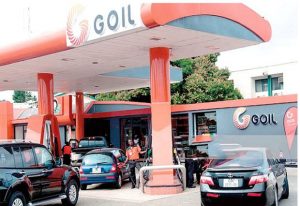 “The former Chief Executive of the Ghana National Petroleum Corporation (GNPC), Alex Mould, has warned that Ghana will soon face a fuel crisis if urgent steps are not taken.

“Alex Mould said that the country will soon be experiencing fuel shortages because companies that import oil products are running out of the needed foreign exchange that will enable them to import these products.” 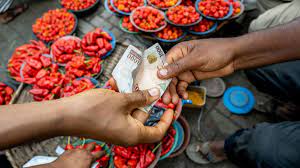 “Annual inflation quickened to 19.6% in Africa’s biggest economy, compared with 18.6% in June, according to data released by the National Bureau of Statistics on its website on Monday. That’s the highest level since September 2005 and more than double the 9% ceiling of the central bank’s target band.” 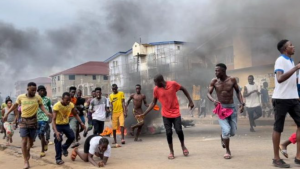 “At Least 21 Protesters Killed during Anti-Gov’t Protests in Sierra Leone.

“Hundreds of protesters took to the streets of the capital Freetown on Wednesday, protesting inflation and the rising cost of living in the West African country. The protests grew violent at times. Graphic images and video of battered and seriously injured protesters and some members of security forces could be seen on social media.” 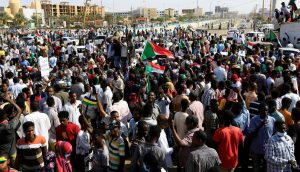 “In a statement, the group condemned the arrests stating that Sudanese security forces fired tear gas at protesters and at their lawyer’s office, and also beat and dragged those they arrested. Some 16 protesters were arrested in Omdurman and a further 19 in Khartoum.” 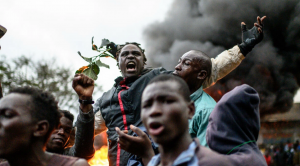 ” Kenyans on Tuesday braced for a potentially turbulent time ahead after the disputed outcome of the country’s presidential election triggered violent protests in some areas… The country of about 50 million people is already struggling with soaring prices, a crippling drought, endemic corruption and growing disenchantment with the political elite.” 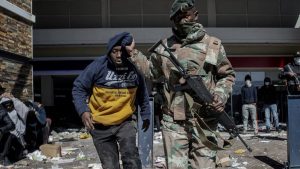 “Leaked service availability figures for the South African National Defence Force (SANDF) show that the country’s army is in no position to deploy troops to tackle civil unrest. Data and information uncovered by Rapport point to several SANDF bases being in dire straits…” 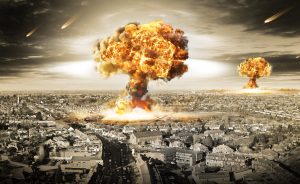 “The results of such a conflict would be catastrophic for food production, climate scientists at Rutgers University have found in a peer-reviewed study published in the context of the war in Ukraine. “The data tell us one thing: We must prevent a nuclear war from ever happening,” said one of the authors, Professor Alan Roebuck.”