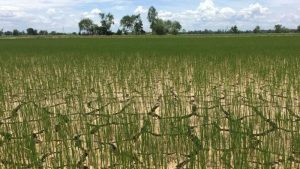 “Global rice supplies at risk as harsh weather hits top exporters… Adverse weather across top rice suppliers in Asia… is threatening to reduce the output of the world’s most important food staple and stoke food inflation that is already near record highs.

“Patchy rains in India’s grain belt, a heatwave in China, floods in Bangladesh and quality downgrades in Vietnam could curb yields in four of the world’s top five rice producers, farmers, traders and analysts told Reuters.”

“Ever more erratic monsoons take their toll in India…

“Economists at international bank HSBC, led by its India chief economist Pranjul Bhandari, argued in July that as the country’s climate has become more volatile, seasonal changes in food prices have become harder to forecast. So have demand for energy and domestic oil prices.”

“Following torrential rains, southern Pakistan has been hit by heavy floods damaging cotton crops which has turned the lives of farmers in Sindh upside down as the rains destroyed thousands of acres of agricultural land and orchards.” 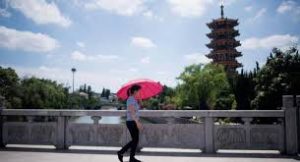 “From 1951 to 2021, the country’s annual average surface temperature rose 0.26 degrees Celsius every decade, according to the Blue Book on Climate Change in China (2022), issued by the China Meteorological Administration.” 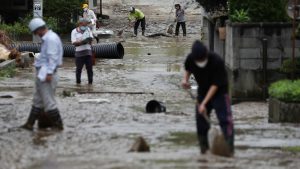 “Linear rainbands have dumped record levels of heavy rain in Aomori and Akita prefectures [Japan], causing mudslides and flooding in some parts of the areas.

“The JMA said a record 154 mm of rain [6.1 inches], or the equivalent of an average monthly rainfall for August, fell in Fukaura, Aomori Prefecture, over a three-hour period through shortly after 8 a.m.”

“Choapa is a province that has seen dramatic changes in recent years due to the country’s 13-year mega-drought. Its nearly 100,000 inhabitants face increasing encroachment from desertification, and the multifaceted water crisis has left its biggest city dependent on surrounding towns for its drinking water supply.” 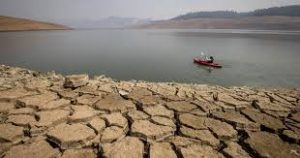 “Half the country [US] is in drought, and no region has been spared.

“The West and California remains engulfed in a multi-year megadrought. But even in the Northeast, a severe “flash drought” — one that comes on rapidly — has intensified and expanded from Connecticut, Rhode Island and Massachusetts into New Hampshire and Maine.” 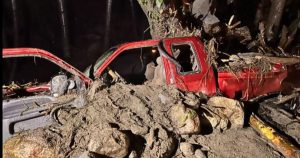 “Three inches of rain on the fire’s east flank caused mudslides and wreaked havoc for firefighters struggling to stop the steady advance of the blaze, which has killed four people. The fire remained at 56,668 acres and containment at 10% on Thursday evening…” 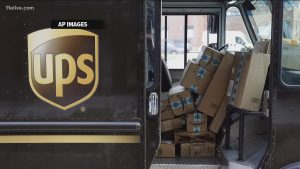 “UPS delivery truck drivers have begun sharing pictures showing the sweltering temperatures recorded inside their vans as communities across the US continue to experience record-breaking temperatures.

“In a viral tweet shared by Teamsters for a Democratic Union drivers posted pictures of thermometers inside trucks reaching 116F (47C), 117F and 121F – temperatures far above what is considered safe.”

“In July, the Great Smoky Mountains National Park saw the most rainfall for any month since the records were started by the National Weather Service in 1988.

“According to the park, the Mount LeConte weather station measured 18.16 inches of rainfall… It followed the driest June on record.” 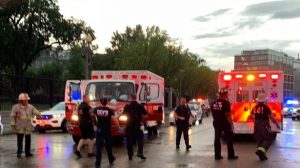 “Four people have been critically injured after a lightning strike outside the White House, fire officials said on Thursday. [An ominous portent if ever there was one!]

“The District of Columbia fire and emergency medical services department said the four people were injured in Lafayette Park, located directly outside the White House complex.” 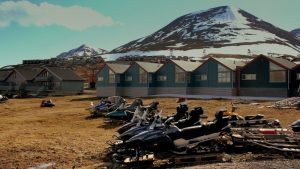 “Unlike glaciers that terminate in floating ice shelves, most glaciers in Svalbard don’t melt at the base, and instead do so from the top down. An early snowmelt this year helped to prime ice surfaces for melting…” 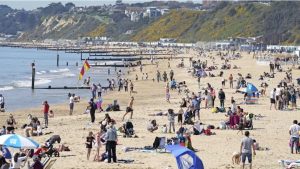 “Temperatures in southern England are set to rise as high as the mid-30 degrees Celsius (95 degrees Fahrenheit) next week as another heat wave threatens parts of Britain.

“The heat …could boost demand for cooling and aggravate already dry conditions hurting crops and forcing limits on water use.” 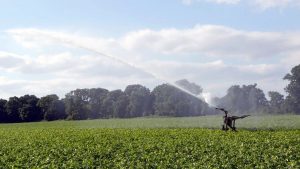 “The UK could face crop shortages in coming months due to a lack of water, growers have warned, as they voiced concerns over national water security…

“I can’t see how potato yields are going to be anything but well below average,” said NFU deputy president, Tom Bradshaw. “Onion yields the same. Carrots and lettuce are in the same boat as the hot weather has had really severe impacts on them.” 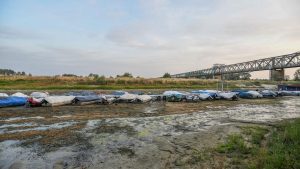 “Water levels in Italy’s Po River, meanwhile, hit a record low in the wake of the country’s worst drought in 70 years, accelerated by abnormally high temperatures…” 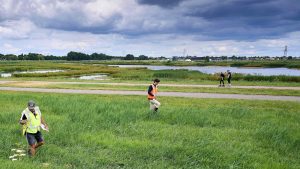 “Parts of the country have already banned farmers from spraying their crops with surface water, in a blow for the world’s second-largest agricultural exporter after the United States. Some canal locks for shipping have also been suspended, with salt water from the sea creeping back into some rivers as their water levels are so low…” 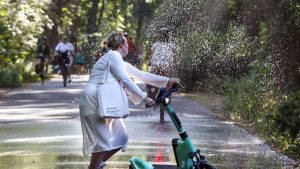 “Historic day in Germany where 55 heat records were broken, some for any month. 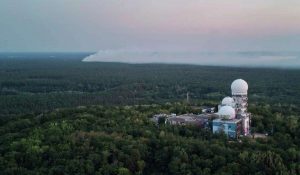 “Repeated explosions have prevented firefighters in Berlin from reaching a blaze in a forest to the south-west of the city that started at a police munitions site used to store second world war bombs.” 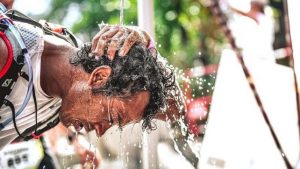 “European Heat Wave: Today [4th August] 36 records of highest temperatures were broken in France including 6 for any month. 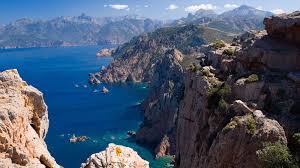 “Rivers have slowed to a trickle, vegetation is dying and wildfires have broken out in the northern part of Corsica, leading the Haut-Corse local authorities to introduce strict new rules.” 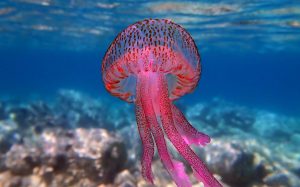 “The marine heatwave is leading to a proliferation of invasive fish species and jellyfish. As the sea warms and becomes saltier because of human-induced global heating, fish from tropical latitudes are finding a more welcoming habitat in an area that, at least nominally, is temperate rather than tropical.” 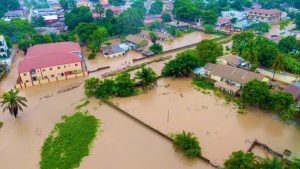 “Floods affect thousands in Gambia after heaviest rainfall in decades [on record for some locations, I think]…

“”Torrential rain started on Saturday morning and continued for more than 20 hours… “The highest rainfall measured over that period was 276 mm (10.87 inches) at Banjul International Airport, compared with a previous record of 175.4 mm in July 1998, it said.” 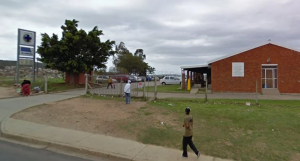 “The Nelson Mandela Bay metro in the Eastern Cape is in the grip of a severe drought after seven consecutive poor rainy seasons. Some of the metro’s 48 clinics and three referral hospitals have had to close temporarily or shorten their operating hours.” 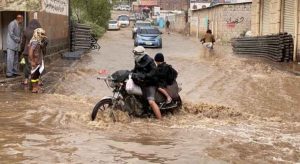 “16 killed in flash floods across Yemen.

“Heavy downpours sparked flash floods that have killed at least 16 people, including two children, and damaged or ruined houses and farms across war-torn Yemen this week, Yemeni media reports and officials said.” 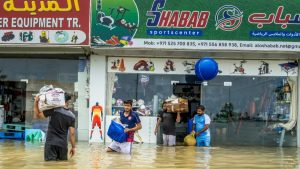 “Heavy downpours have forced the UAE to battle floods as it recorded its wettest weather in decades, while neighboring Saudi Arabia reported torrential rain and thunderstorms…

“The Intertropical Convergence Zone encircles Earth near the thermal equator though its specific position varies seasonally… “This summer this has shifted north,” said Habib…” 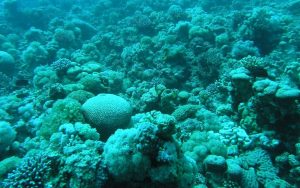 “Two Years After Freak Storm, Eilat’s Red Sea Coral Reef Still Struggling to Recover… An unusually powerful storm struck the area in March 2020 that destroyed some of the coral and buried many in sand and carried human debris into it…

“The coral reef off Israel’s southern coast has seen a worrying rise in water temperature and a 50 percent drop in sea urchin, which play a key role in its ecosystem…” 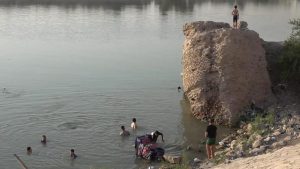 “Temperatures in some provinces are rising as high as 50 degrees Celsius (122 Fahrenheit), particularly in the country’s south, according to the authority’s forecast.”

You can read the previous ‘Climate’ thread here. I’ll be back tomorrow with an ‘Economic’ thread. That will be my final thread until Monday 15th August, as I’m off visiting my parents next week. My apologies for any inconvenience and a huge thank you to my donors and subscribers for helping to keep the ever inflating wolf from my door.

If you found value in this content, please help me continue this work by becoming a patron of my work via Patreon. And if you are already a subscriber or have donated – thank you! It is an enormous help, as the cost of living crisis ratchets up here in the UK.