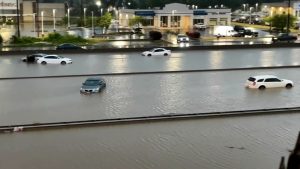 “Torrential and record-breaking rainfall caused widespread flash flooding in the St. Louis area Tuesday morning, killing at least one person, forcing rescues of people trapped in vehicles and homes, and spurring road closures including on part of Interstate 70, officials said.

“In St. Louis itself, more than 8 inches of rain had fallen from midnight to 7 a.m. CT — already surpassing the city’s all-time one-day record of 6.85 inches set on August 20, 1915, the National Weather Service said.”

“Alaska is burning this year in ways rarely or ever seen, from the largest wildfire in a typically mainly fireproof southwest region to a pair of blazes that ripped through forests and produced smoke that blew hundreds of miles to the Bering Sea community of Nome, where the normally crystal clear air was pushed into the extremely unhealthy category.” 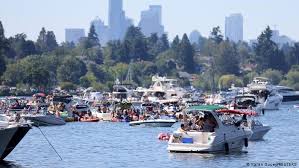 “Though the forecast falls short of June 2021 “heat dome” that brought temperatures of 116F (46.7C) to Portland, and 118F (47.8C) to other parts of the Pacific north-west, and resulted in more than 600 deaths, local officials say the duration of this heat wave is concerning.” 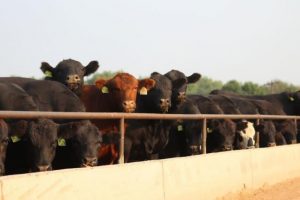 “[This is not] a typical method for disposing of bodies. But so many cows died in the unusual heat and humidity that facilities that normally convert carcasses into pet food and fertilizer products were overwhelmed, prompting the state government and cattle feeders to take emergency measures.” 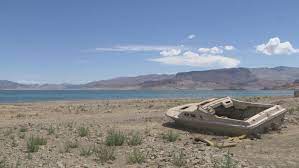 “The human remains surfaced on Monday in the Boulder Beach swimming area at Lake Mead – the largest reservoir in the US formed by the Hoover Dam on the Colorado River – which is rapidly receding due to climate change.”

“The taps for domestic use get turned on first thing in the morning and are shut off by around 10 a.m., but many people have no water at all — instead lining up every day with large bottles at cisterns in the city. Some of those who do receive water have reported it coming out brown and cloudy…” 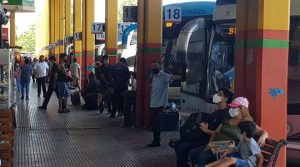 “Hottest July day on records for Paraguay today 25th July with 39.1C [102.4F] at the Vallemi Airport, near Concepcion.

“Also 38.6C at Las Palmas. Both exceed the previous record of 38.5C. In Argentina 36C at Las Lomitas. 3 more days of record heat are coming.”

“As the Amazon burns, only the weather can ward off a catastrophe, experts say…

“Smoke from fires in parts of the Brazilian Amazon are getting closer to cities. The combination of the highest number of forest fires in 15 years and highest ever deforestation rate recorded in the month of June, this year’s dry season is off to a fiery start, raising concerns about its peak over the next few months.” 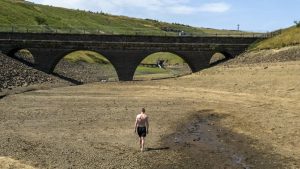 “Officials at the Environment Agency (EA) are transferring water to low running rivers, rescuing fish and reoxygenating water, while water companies are implementing the early stages of their drought plans.” 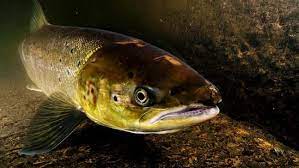 “Wild salmon stocks are at their lowest on record in England, a government report has found.

“Officials said the number of fish was reaching “crisis point” with urgent action required, including removing barriers in waterways and improving water quality.” 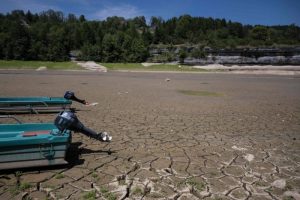 “A record 90 out of 96 mainland French regions face water restrictions due to an ongoing drought, official figures showed on Tuesday, as scorching temperatures and low rainfall cause supply shortages in many areas.

“Only a handful of “departments” around the country are exempt from the restrictions, including the Paris area, the government’s drought website Propluvia shows.” 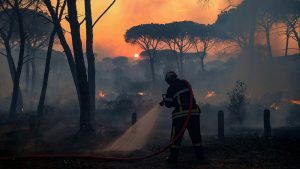 “All over Europe, temperatures in wine regions have been sweltering at new highs, and heat waves are moving north into such normally cool countries as Germany. In the UK, temperatures above 40C (104F) were recorded for the first time. Winemakers worry this will lower yields by 25% or more for this vintage. Many had already been slammed by early [late, surely?] frost and hail.” 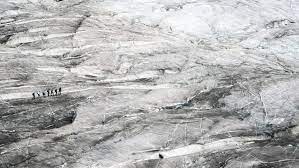 “The Alps’ glaciers are on track for their highest mass losses in at least 60 years of record keeping, as temperatures in the Alps are warming at around 0.3C per decade — around twice as fast as the global average.”

“Another bad news for the Alps: The sounding at Payerne set a new record of the highest freezing line with 5184 m above sea level tonight. The previous record was 5117m on 20 July 1995.” 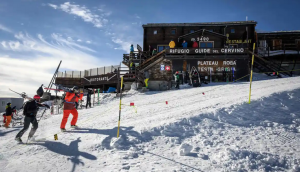 “A melting glacier in the Alps has shifted the border between Switzerland and Italy, putting the location of an Italian mountain lodge in dispute.

“The borderline runs along a drainage divide – the point at which meltwater will run down either side of the mountain towards one country or the other.” 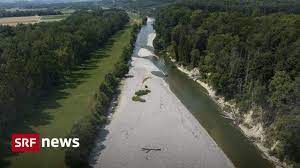 “Eleven river monitoring stations in Switzerland have recorded the highest temperatures since measurements began. Twenty-two further stations recorded record temperatures for July. The Aare at Thun (23.4°C) and at Bern (23.9°C) has never been hotter…” 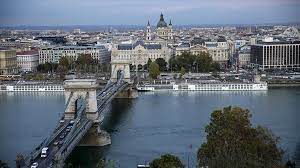 “”The (previous) highest night temperature level was recorded in the city of Szeged on July 24, 1894 at 24.6C (76.28 F) and the (latest) temperature was measured at 25.4C (77.72F) in the capital Budapest yesterday,” the Hungarian General Directorate of Meteorology said in a statement.” 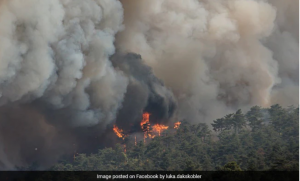 “Wildfires Are Setting Off 100-Year-Old Bombs on WWI Battlefields.

“A wildfire is consuming Slovenia and as the blaze moves across areas that were once battlefields during World War I, it’s meeting century-old unexploded ordnance with deadly results… There are so many explosions due to the raging fire that officials have stopped counting them…” 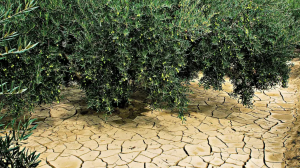 ““We are used to a lack of water, but not to this point,” said Felipe Elvira. The region used to get 800 litres (210 gallons) of rainfall per square metre, but is set to get around half that amount this year, he said. “Every year it’s worse,” Elvira said.” 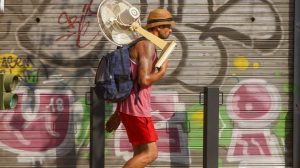 “The world’s first named heat wave hit Seville, Spain, this week, pushing temperatures past 110 degrees Fahrenheit [43.3C] and earning the most severe tier in the city’s new heat wave ranking system. Heat wave “Zoe” has brought scorching temperatures to the southern part of the country for the last few days…” 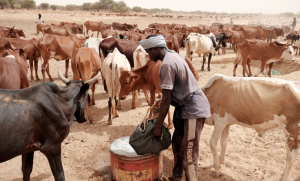 “In recent years, rains have been erratic and inconsistent, sometimes too light, other times overwhelmingly strong – as evidenced by a collapsed well nearby, brought about when a torrential rain soaked the landscape. The words “climate change” are on everyone’s lips.” 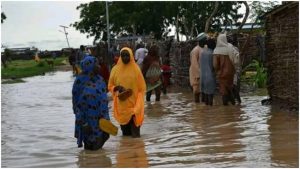 “Last week, floods and flash floods were reported in Yobe State, resulting in several fatalities… The unmistakable impact of the climate change crisis is in every state in Nigeria and the heavy rainfall that results from it now force streams and rivers to overflow their banks while reservoirs burst if water is not released on time.”

“At least 13 people died and more than 1,000 were left homeless after heavy rainfall triggered floods in the Central African Republic last week, the Red Cross told AFP on Monday.

“Local Red Cross chief Antoine Mbao Bogo said he was “surprised” at a toll he described as unprecedented in a country where flooding is frequent.” 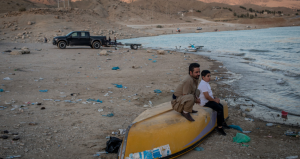 “Farmers in Iraqi Kurdistan seeking to irrigate crops face seeing their economic lifeline slip away as the waters of Lake Dukan recede and dams upstream in Iran stem the flow.

“Bapir Kalkani, who is also a trade unionist, farms near the picturesque lake but has seen marked changes over the past three years as Iraq suffers prolonged drought.” 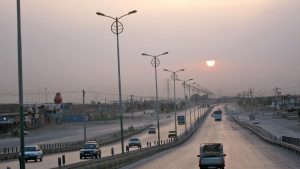 “The heat is brutal in Central Asia with temperatures still near 47C [116.6F] in Turkmenistan. In Northern Iran new all time high at Khor with 48.7C [119.7F], an absolute record beaten twice in 2 months.

“The extreme heat will persist for 3/4 more days.” 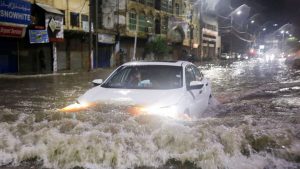 “Flash floods across Pakistan have killed at least 310 people and injured hundreds, with the government issuing warnings of further extreme monsoon downpours in 14 more cities.

“The southern city of Karachi, home to 16 million people, has seen neighbourhoods and vehicles submerged in knee-deep muddy flood water; roads are impassable. At least 15 people have died since Saturday.” 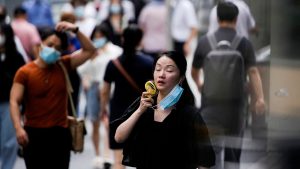 Yesterday the metropolis of Guangzhou tied its all time record of highest temperature in its downtown station of Huadu Stadium with 39.3C while the town of Gaoyao broke it with 38.8C. Today new all time record at Shimian with 40.6C [105.1F].” 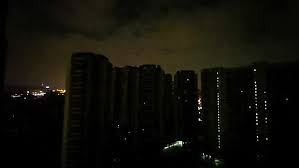 A long-running heatwave in China has pushed electricity usage to record levels in some areas and led to blackouts, with warnings that the high temperatures are expected to continue for at least another week.” 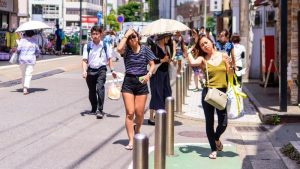 “As temperatures soar to unprecedented levels from Europe to Asia this summer, some Japanese insurance companies have begun selling policies to protect people struck down by heatwaves. Sompo Holdings Inc. and Sumitomo Life Insurance Co., two of the country’s biggest insurers, are offering policies specifically designed to cover medical expenses arising from heatstroke.” 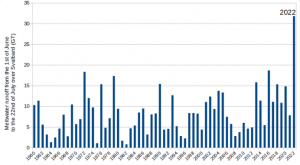 “The current surface melt anomaly over the Svalbard ice caps is incredible with a cumulated melt from the beginning of this summer 2 times larger than previous records!!“