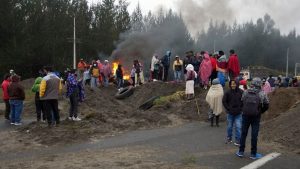 ““We are experiencing the first global energy crisis,” said Jason Bordoff, an energy expert at Columbia University, who noted that the crunch has hit almost all of the world’s regions and energy sources. “The ripple effects are being seen globally, and I don’t think we’ve seen the worst of it yet.”” 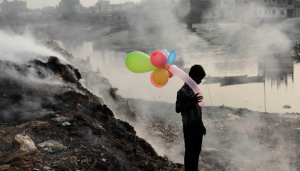 “The global economy looks increasingly likely to be heading into a serious slowdown, just as the highest inflation in a generation prompts central banks to aggressively reverse the ultra-loose monetary policy adopted during the pandemic to support growth, [business activity] data showed on Friday.” 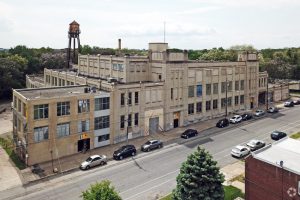 “Philadelphia-area manufacturers’ outlook for business conditions slumped this month to the lowest level since 1979 as gauges of future new orders and planned capital expenditures both deteriorated… “A US recession around the end of this year and early next is now likely.””

“The price of natural gas in the US has risen by nearly half in the past month, as drought and the war in Ukraine continue to bite and millions of Americans turn up their air conditioners in a heatwave. Natural-gas futures jumped 48% this month, including 10% on Wednesday…” 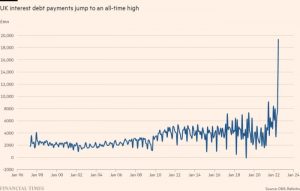 “A quarter of the UK’s government debt is index-linked, so the cost of servicing it is pushed up by inflation, which is running at a 40-year high.” 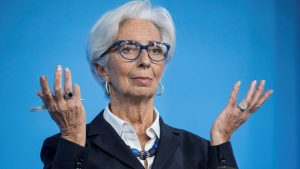 “European Central Bank raises interest rates for first time in 11 years. In a surprise move, the ECB pushed its base rate up by 0.5 percentage points, after economists had expected a smaller 0.25 point rise.

“Joining the US Federal Reserve and Bank of England in the fight against inflation, the ECB said the increase was necessary after a surge in food and fuel costs that shows no signs of easing in the next few months.” 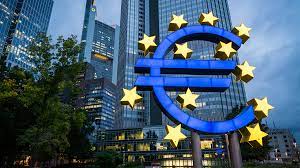 “The sharp decline in the composite PMI from 52 to 49.4 indicates that recessionary pressures are becoming more widespread in the eurozone economy. For the European Central Bank, this confirms our view that it will only hike another 50 basis points in total this year.” 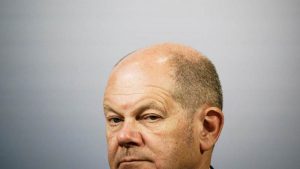 “Germany will bail out gas importer Uniper, Chancellor Olaf Scholz said Friday, promising to do “what is necessary and as long as it is necessary” to help keep the country afloat amid fears of a Russia-driven energy crisis.

“Speaking to reporters in Berlin, Scholz — who interrupted his summer holidays in the Bavarian Alps for the announcement — said his government would acquire 30 percent of Uniper, Germany’s biggest gas importer, as well as provide €7.7 billion in government support…” 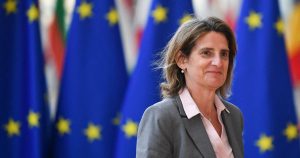 “A group of European Union countries mainly from the south has already shot down Brussels’ bid to grant itself the power to ration gas around the bloc less than 24 hours after the debut of the proposal Wednesday… ministers in Poland, Portugal, Spain, Cyprus and Greece have already emphatically said “no” to the proposed power grab…” 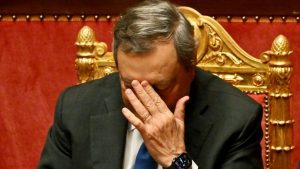 “In reality the forces that brought down “Super Mario” this week apply well beyond Italy’s borders. The immediate cause is the cost-of-living crisis — and the way that crisis has sharpened the contradiction between the expectations of the mass of the people and the imposition, by government, of economic policies which push in the opposite direction.” 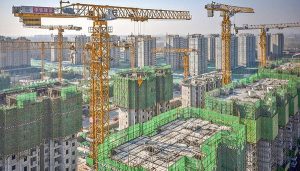 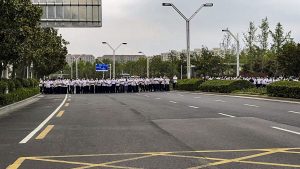 “A group of angry suppliers to China Evergrande Group are threatening to stop paying their bank loans to protest the struggling developer’s unpaid bills, hitting a property sector already reeling from a mortgage-payment boycott… The troubled company has a vast network of suppliers nationwide for its projects…” 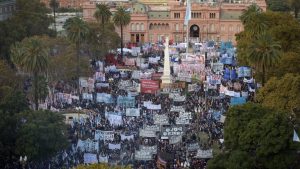 “Rising fuel prices have already brought about protests in Argentina, Ecuador and Panama. Their neighbors could be particularly susceptible to rising prices at the pump, because the region lacks alternative means of transportation, such as railways and waterways that are more common in Europe and North America — and guzzle less fuel.” 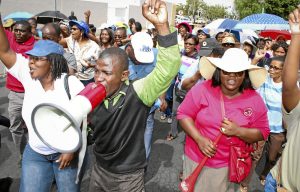 “The National Transport and Taxi Union, which represents taxi operators, has threatened to go on an indefinite nationwide strike from July 26; it has called on the government to increase fare prices. The Seven-Seater Association has also indicated that it would cease operations. Fuel station owners have also reportedly threatened to close…” 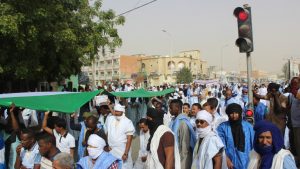 “Protests have rocked towns and cities in Mauritania after the government decided to hike up fuel prices last Friday.

“Mauritania’s energy minister told state media last week that the government had decided to raise the price of petrol and gas oil because a global rise in oil prices, exacerbated by Russia’s invasion of Ukraine, was denting the Mauritanian state budget.” 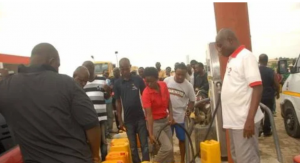 “Cameroonians queue for fuel as shortages hit the capital.

“Most fuel stations have run out of diesel in recent days and those that have are now rationing it. “You line up for 4 hours, 5 hours, I’ve been here since 6 o’clock,” said Nkeudeu, a transporter. “There is already no fuel at other stations and where we find a little bit of petrol, we are told we can’t fill our tanks,” said Moffo Koumeni, a cab driver.” 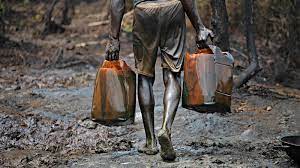 “Nigeria’s oil revenue problem didn’t stem from a drop in production. Instead, Nigeria continues to battle oil theft, pipeline vandalism, and most critically, high gasoline prices, which the country subsidizes. The severe revenue shortfall does not allow Nigeria to service its debt.” 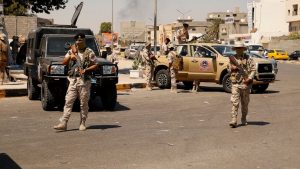 “Clashes broke out in the Libyan capital, Tripoli, overnight, between militia forces just days after a deal that saw the country relaunch oil production and exports after a months-long force majeure.

“At least nine people had been confirmed dead and 25 injured, according to various local media reports, by Friday morning, with civilians caught in the crossfire between two militia groups…” 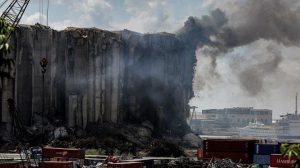 “While the Lebanese look on helplessly as the last of the wheat stored in the silo burns, mills and bakeries around the country are struggling with an acute shortage of subsidized flour used to make Lebanese pita bread.” 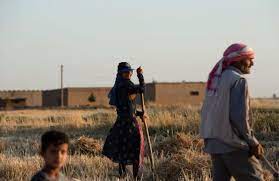 “Farmers in Syria feel the brunt of poor wheat harvest…

“Similar to last season, he said the harvest had been hit by a delay in the onset of rainfall, prolonged seasonal dry spells, and a devastating early cessation of rainfall.

“Crops were also affected by weather anomalies including frost and sharp rise in temperatures.” 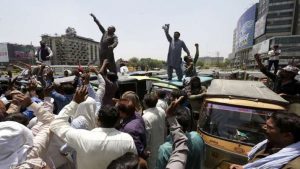 “The latest slide reflected mounting concerns that a $1.2bn loan disbursement from the IMF agreed last week might not be enough to avert a balance of payments crisis. Pakistan’s bonds have been among the worst performers in emerging markets this year.” 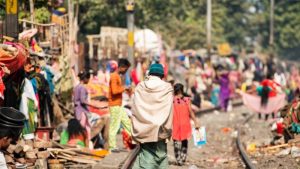 “Worries Rise for India’s Economy as Rupee Falls Past 80 a Dollar.

“The Indian rupee’s decline to a lifetime low is adding to angst over imported inflation as well as an external deficit blowout, prompting analysts to draw parallels with the taper tantrum of 2013. The local currency is the third-worst performer in Asia in the past month…” 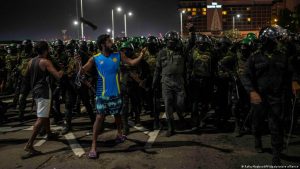 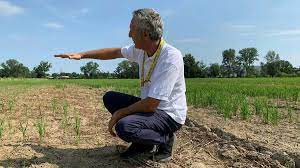 “Even when the heat has not caused obvious damage, the impact of such extreme weather can have lasting effect, especially on food production. The result is likely to be “heatflation”, unusually hot temperatures causing smaller harvests and rising food prices.”