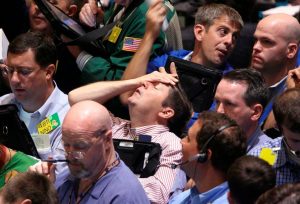 “A day after Powell’s assurances about the economy, markets are worried that ‘the Fed breaks something’…

“Federal Reserve Chairman Jerome Powell’s insistence that the central bank is not deliberately trying to cause a recession and that the economy is on solid footing is exactly what someone in his position would be expected to say.

“The trouble is, the Fed’s likely to get a recession anyway as data shows the economy is a far cry from stable.

““What the market is worried about, even before you get to a recession, is a policy mistake, that the Fed breaks something,” said Quincy Krosby, chief equity strategist at LPL Financial. “The market also is questioning his comment that the economy is strong.”” 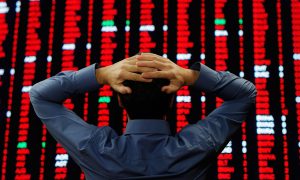 “…higher central bank borrowing rates are just one part of the story and the great unwind of central bank balance sheets is arguably a far more direct impact on world markets.” 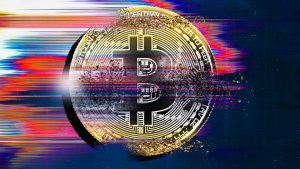 “Crypto Bank Runs Are Spreading as Accounts Are Frozen.

“In a statement on its website, Celsius Network, a major crypto lender, cited “extreme market conditions” for the withdrawal freeze, saying that it had acted to “stabilize liquidity and operations while we take steps to preserve and protect assets.” The company had no further comment. For investors who remember the 2008-09 financial crisis, all of this has a familiar ring.” 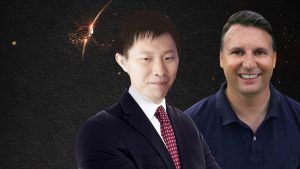 “The co-founders of an influential multi-billion-dollar crypto hedge fund have suddenly gone MIA right at the moment that people want their money. Days of swirling rumors have been followed by harder evidence that Three Arrows Capital, or 3AC, is ghosting its business partners…” 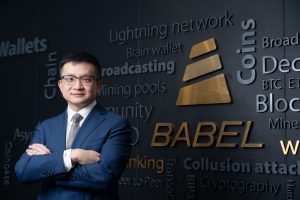 “Hong Kong-based Babel Finance temporarily suspended the withdrawals and redemption of crypto assets on Friday, as the crypto lender scrambles to pay its clients after the recent slump in the digital currency market.” 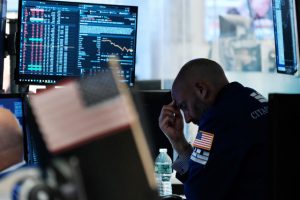 “US stocks have suffered their heaviest weekly fall since the outbreak of the coronavirus pandemic, after investors were spooked by a series of interest rate increases by big central banks and the threat of an ensuing economic slowdown… The FTSE All-World index, a measure of emerging and developed markets, also dropped by the most since March 2020” 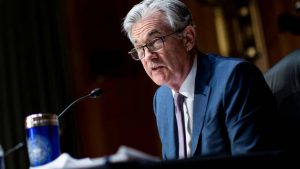 “Investors yanked billions of dollars out of corporate bond funds over the past week as unexpectedly high inflation data prompted an aggressive interest rate increase by the Federal Reserve, intensifying fears over a global economic downturn.” 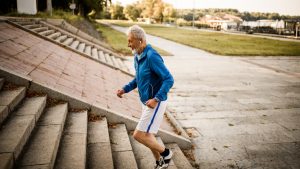 “For many older Americans, record high prices are jeopardizing their financial security just as they approach or live in retirement, according to a recent survey from The Senior Citizens League, a nonpartisan senior group.” 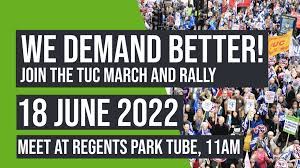 “Organised by the Trades Union Congress (TUC), the march will start at midday, with protesters walking from Portland Place to Parliament Square for a rally. The TUC said there was “harrowing” evidence of the impact the crisis was having on families…” 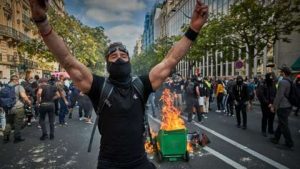 “France could plunge the eurozone into its next crisis. The country is dancing on a debt volcano…

“French inflation in May was 5.2 per cent and debt financing at 2.2 per cent, both rising fast. Add to that a French national debt to GDP ratio of 115 per cent which, in absolute, rather than percentage, terms is the highest in the EU; when public and private debt are combined, it reaches a staggering 361 per cent (UK 289 per cent, Germany 205 per cent) making France for the first time the greatest debtor in the world.” 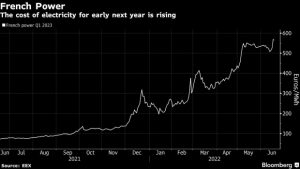 “France’s nuclear reactors are operating at less than half their full capacity and this week have produced the least electricity at this time of year since at least 2008, according to data compiled by Bloomberg. The country, where warm weather is already making it tougher to cool the fleet of reactors, is importing power from neighboring countries like the UK…”

“Another two-month delay at Finland’s Olkiluoto 3 nuclear reactor, which was originally due to start operations in 2009, poses a risk to power supply this winter in the absence of Russian imports, grid operator Fingrid said on Thursday.” 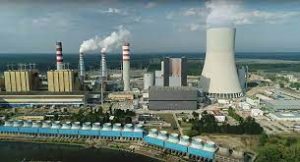 “Gas Rationing Is Getting Closer for Europe.

“Russia slashed gas supplies in apparent retaliation over Europe’s support for Kyiv. After its biggest moves yet to use energy as a weapon, gas rationing in the region is now a very real prospect… Germany, which is at the first level of its own three-stage crisis plan, is considering a range of options to reduce demand…” 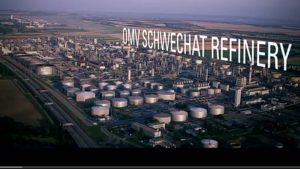 “Experts believe there will be a fuel shortage during summer, even if the accident in the Schwechat oil refinery did not take place. Therefore, Austria and Hungary made a part of their strategic fuel reserves available for domestic consumption last week. However, it seems those measures will not provide long-term solutions to ease the problems.” 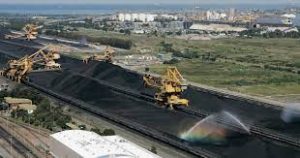 “Australian authorities have given themselves the power to block coal exports if the resource is needed to ease the country’s crippling power crisis in the latest measure taken to avert the risk of blackouts.”

“A record 10.7 million university graduates will swarm the labor market this year, likely sending the youth jobless rate to 23% in July and August, economists at BofA Securities Inc. estimated in a report… rising joblessness, if persistent, could ripple across the economy and stir discontent and even unrest.” 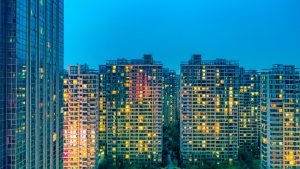 “China’s property troubles have pushed one debt indicator above levels seen in the financial crisis.

“A measure of risk levels for debt in Asia has surpassed its 2009 financial crisis high, thanks to a surge in downgrades of Chinese property developers since late last year, ratings agency Moody’s said Wednesday.” 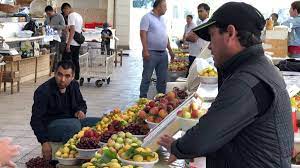 “For several months now, there have been reports of shortages and increased prices of food staples such as flour, rice, cooking oil, sugar, and in some parts, carrots and onions. And it’s not only food that is getting expensive. So are fuel, electricity, gas, and everything else.” 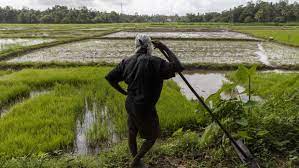 “As Sri Lanka battles its worst economic crisis in decades, Daranagama has barely touched his four-acre field this season. Without access to fertilizer, he and other farmers expect crop yields to slump, threatening food supplies across a nation already pushed to the brink.” 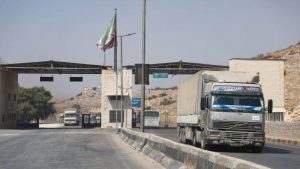 “The last remaining UN humanitarian aid route into Syria looks set to be shut down in a vote at the body’s security council next month, another casualty of the collapse in relations between the west and Russia…

“On Thursday, the heads of all the major UN agencies – including Martin Griffiths, the head of the UN humanitarian agency OCHA – issued a rare joint appeal to keep the border crossing open.” 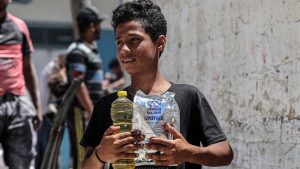 “Gaza Strip — The Hamas-run Ministry of Finance is battling a new financial crisis amid declining fiscal revenues and soaring prices of most imported consumer goods in the wake of the Russian war on Ukraine.

“Hamas has cut taxes on and even subsidized fuel and cooking gas supplies from Egypt, paying the price difference after their global hike. These costs and shrinking tax revenues have drained the treasury.” 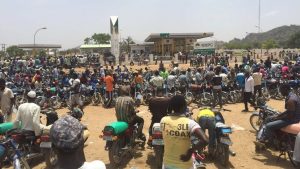 “In a recent interview with Bloomberg, Fadi Mitri who heads Puma Energy, one of the largest fuel distributors in Africa, said governments across the continent are now faced with two difficult choices —either cap fuel price with legislation or allow market forces determine price.” 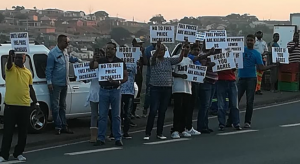 “‘It was an easy decision for all Cosatu affiliates and alliance partners to participate in the demonstration as the current situation is an injury to all,’ said Cosatu KZN Provincial Secretary Edwin Mkhize. ‘We have an economy that is bleeding jobs and therefore rising cost of food and fuel will subject our people to extreme levels of poverty,’ he said.” 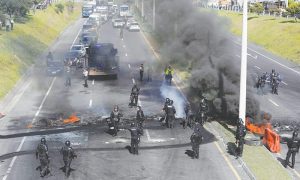 “Indigenous groups have blocked roads across the country this week — costing the agriculture and tourism industries millions of dollars a day in lost revenue — in support of demands for more energy subsidies and price controls on basic goods.” 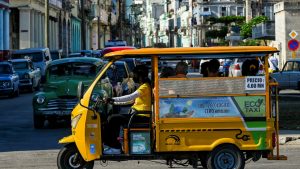 “No petrol, no cars: Cubans turn to electric transport.

“Gonzalez has abandoned his old, combustion-engine car — one of about 600,000 registered on the island of 11.2 million people, according to official data. The last time he tried to fill it up, he stood in a queue for eight hours… increasingly popular are electric motorbikes…” 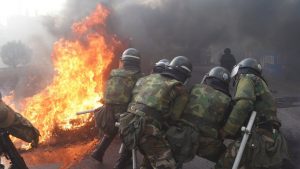 “Dozens of countries risk protests, riots and political violence this year as food prices surge around the world, the head of the food-aid branch of the United Nations has warned…

““Even before the Ukraine crisis, we were facing an unprecedented global food crisis because of Covid and fuel price increases,” said David Beasley, director of the UN World Food Programme.””