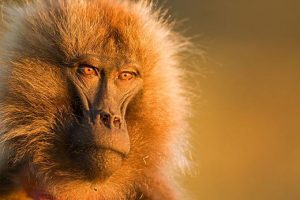 “Extreme Ethiopia drought sees hungry monkeys attack children. Severe drought and hunger in Ethiopia have caused unusual animal behaviour, including monkeys attacking children and livestock out of hunger, according to a Save the Children report…

“Extreme malnutrition is only expected to get worse in the coming months as food prices continue to rise due to the devaluation of the Ethiopian birr and the war in Ukraine.” 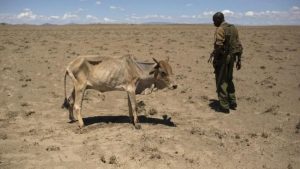 “Climate change is pushing countries like Ethiopia, Kenya and Somalia into a famine as they face their fifth consecutive deficit rainy seasons… Already 7 million livestock have died and some 20 million people are enduring severe hunger, according to WFP.” 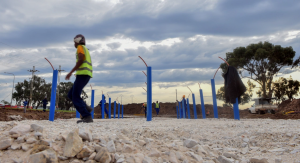 “South Africa’s southern Nelson Mandela Bay municipality, which includes the coastal city of Gqeberha, is facing water outages after the levels of a major dam in the Eastern Cape province dropped too low for extraction.” 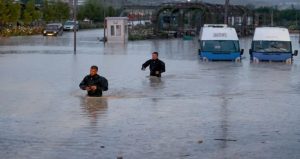 “Strong rain, winds and flash floods are expected in northern and central Turkey on Monday, after a weekend of flooding that reportedly killed at least four people. Bad weather warnings were in place in 42 towns and cities in the north and centre…”

“Iraq is quickly becoming the land of no rivers…

“Iraq is facing an existential threat… Acute water shortages could cause the two main rivers that nourished one of the world’s greatest civilizations to dry up within just a few years. Iraq… might be closer than anyone had predicted to losing its two key water arteries: The Euphrates and the Tigris.” 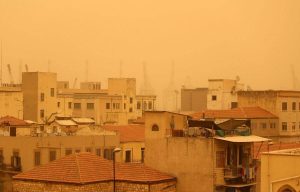 “…in a country that has warned climate change poses an “existential threat”.” 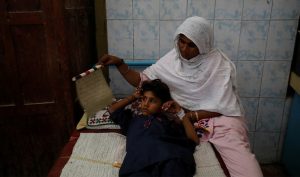 “Heavily pregnant Sonari toils under the burning sun in fields dotted with bright yellow melons in Jacobabad, which last month became the hottest city on Earth… These women in southern Pakistan and millions like them around the world are at the searing edge of climate change.” 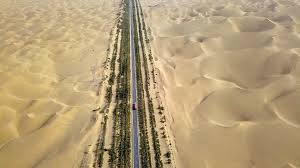 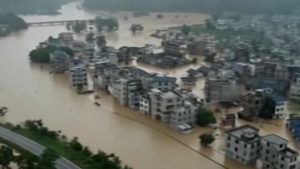 “Video on state broadcaster CCTV showed large parts of cities flooded in muddy waters. Rescue workers carried trapped people out of buildings on their backs in waist-deep water in Guangdong province, also in the southeast.” 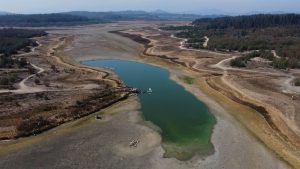 “Chile’s drought has hit mine output in the world’s largest copper producer, stoked tensions over water use for lithium and farming, fuelled forest fires and driven the capital Santiago to draw up unprecedented preparations for water rationing.” 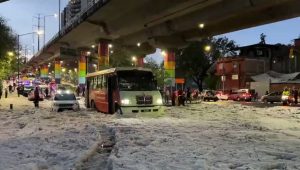 “… the storm chucked out such a barrage of hail that it formed a thick sludge, covering cars and blocking roads. Some shocking footage recorded by one local even showed a supermarket roof collapsing, leaving one shopper injured.” 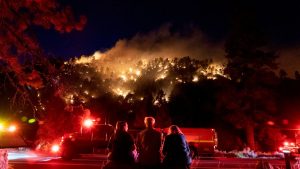 ““Insurers are very much concerned about the wildfire situation,” said Arindam Samanta, director of product management for Verisk Underwriting Solutions. “We are talking to dozens of insurers.” …The trend points toward earlier and more severe seasons in the West.” 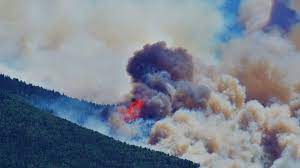 “A 57-year-old man arrested on suspicion of sparking a 5,000-acre forest fire in Arizona told deputies he was burning used toilet paper Saturday while living in the Coconino National Forest… Less than an hour after the fire was reported, a sheriff’s deputy spotted a Chevrolet pickup driving away from the area…” 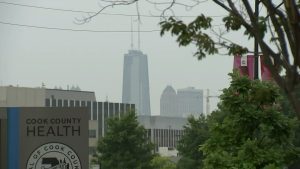 “Over 100m Americans urged to stay indoors over extreme heat and humidity.

“The heatwave, which set several high temperature records in the west, the south-west and into Denver during the weekend, moved east into parts of the Gulf coast and the midwest on Monday and will expand to the Great Lakes and east to the Carolinas, the National Weather Service said.” 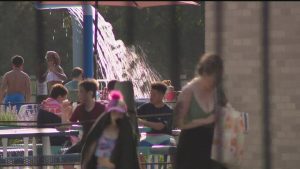 “A note about the stifling heat in the USA which persists all night long. St. Louis, Missouri with a minimum temperature of 83F/28.3C had its warmest June night on records. 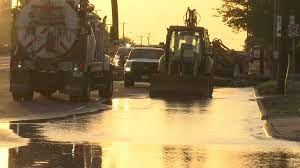 “Emergency workers in Odessa, Texas were dishing out bottled water on Tuesday as a burst pipeline emptied the city’s taps – a catastrophic situation that came amid 102 degree temperatures in a powerful heatwave.

“Schools, businesses and even hospitals in the city closed, with Medical Center Hospital cancelling all planned surgeries and shuttering for the day for non-emergencies.” 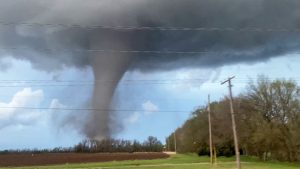 “For decades, the most active tornado zone in the US – known as Tornado Alley – has been located …largely in the states of Texas, Oklahoma, Kansas, Nebraska and South Dakota. But the danger zone appears to be shifting, as evidenced recently by devastating tornadoes in Michigan and Minnesota.” 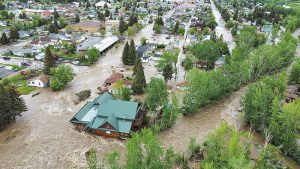 “The historic floodwaters that raged through Yellowstone this week, tearing out bridges and pouring into nearby homes, pushed a popular fishing river off course — possibly permanently — and may force roadways nearly torn away by torrents of water to be rebuilt in new places.” 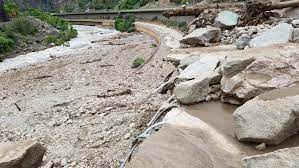 “Severe flooding in northern California over the weekend triggered a series of mudslides close to burn scars from last year’s Dixie Fire, closing a nearly 50-mile stretch of Highway 70 in Butte and Plumas.” 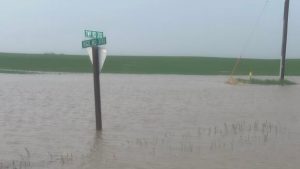 “Roads were flooded and basements were soaked in towns across Saskatchewan on Monday. Terri Lang, a meteorologist with Environment and Climate Change Canada, said the Battlefords area was hit hardest. “They came in with a whopping 100 millimetres. And that was in about six or seven hours,” Lang said.”

“Wide flooding is expected, which may create risks for people’s safety and may necessitate evacuation of residents. The expected weather will make movement difficult, Water, electricity and telecommunications disruptions are expected as well.” 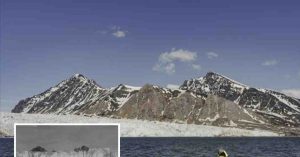 “In a viral Reddit post, photographer Neill Drake shared a photograph he took that showed just how much the Blomstrandbreen Glacier, which is located in a bay in Svalbard, an island far north of Norway, has retreated.” 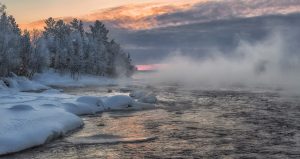 “…the development of the Kolmozero field comes at a high price. The new mine will be located far away from existing infrastructure and major areas of pristine Arctic lands will be affected.” 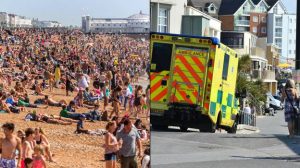 “Health bosses warned Brits to be wary of heat exhaustion as the country could see its hottest ever June day, with temperatures set to soar to a record 96F (35.6C) later this week.

“UK heat peaks are expected to beat Jamaica and Costa Rica by Friday and power past 86F (30C), with some forecasters predicting parts of southern and the east of England will break records for the time of year.” 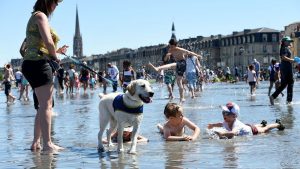 “Record-breaking temperatures for June are set to hit France in the coming days, as a ‘plume of heat’ brings hot air from across the planet.

“Temperatures are set to hover upwards of 30C and even 40C [104F] in much of the south, with forecasters dubbing the heatwave the earliest ever since records began.” 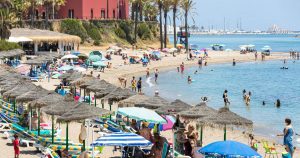 “…tourists are being warned that a Spanish heatwave could bring temperatures approaching 50C [122F] to parts of the country in the coming days.

“It is the second major heatwave in Spain in a matter of weeks – even though the summer season in the country does not officially begin for another week. Last month was the hottest May on record in Spain years and the current heatwave is earliest to hit the country for 40 years.” 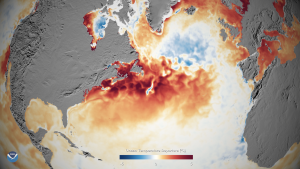 “Oceans are getting warmer…

“Annual average temperatures of the oceans’ surfaces have been diverging from the 20th century (1900-1999) average more and more since the 1980s… the continuing global warming will lead to changes in the strength, frequency, spatial extent and duration of extreme weather events.”