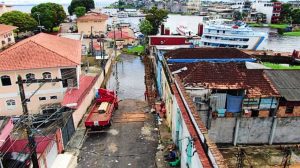 “For the second straight year, inhabitants of Brazil’s Amazon rainforest are being overwhelmed by flooding, with hundreds of thousands of people already affected by waters that are still rising…

“The Negro River reached a depth of 29.37 meters (96 feet) Monday at the measuring station in Manaus, compared to the record 30.02 meters registered last year.

““I faced last year’s flood, and now I’m dealing with the 2022 flood,” said Raimundo Reis, a fisherman who lives with his son in Iranduba, a city across the river from Manaus.” 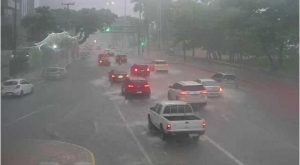 “Heavy rain caused flash floods in the area of Recife, with residents in low lying areas advised to seek shelter. Homes were flooded, with roofs, walls and possessions destroyed. Businesses and schools closed as buildings were damaged.” 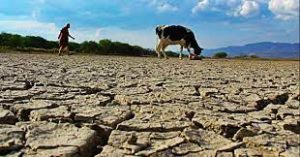 “”Many growers have already stopped watering their gardens, especially further north [of Santiago]… the deposits are practically dry,” he told the Olive Oil Times. “There is also a water problem in the southern fields, but the north is worse. We will have to wait and see how this winter arrives with the rain.”” 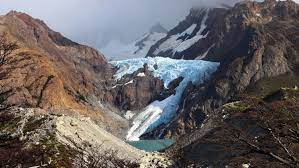 “Chile to Cushion the Blow of Glacier Ban on Giant Copper Mines.

“Chile’s government is looking at a gradual implementation for a proposed ban on mining near glaciers in order to limit the impact on some of the world’s biggest copper mines and their planned projects high in the Andes.”

“Gavin Newsom threatened the possibly of statewide mandates in a meeting with representatives from major water agencies, including those that supply Los Angeles, San Diego and the San Francisco Bay Area, according to his office.” 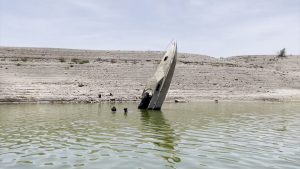 “The water level in Lake Mead — the nation’s largest reservoir — dropped below 1,050 feet elevation for the first time last week, a critical milestone that signals more stringent water cuts are around the corner for the Southwest…

“As of Tuesday, Lake Mead’s level was around 1,049 feet above sea level. As the water level drops, formerly sunken boats are emerging in the mud, and other vehicles are getting newly stuck.” 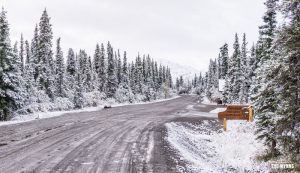 “Summer operations resumed on May 20, but park public affairs officer Sharon Stiteler says conditions along the Park Road are lagging behind the calendar.” 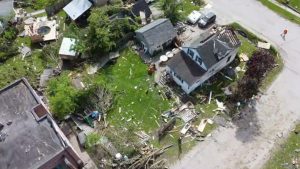 “The Town of Uxbridge, east of Toronto, has declared a local state of emergency due to storm damage, with some buildings reduced to rubble and streets blocked by uprooted trees, downed power lines and broken telephone poles.” 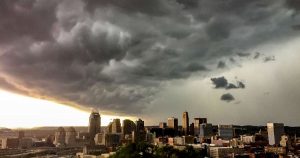 “If you think we’ve gotten more rain than normal this month around the region, you’d be correct.

“According to measurements taken at the Cincinnati/Northern Kentucky International Airport by the National Weather Service, 8.13 inches of rainfall have been recorded, making the first 21 days of May the wettest on record.” 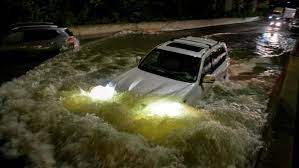 “The Atlantic season, which extends from June 1 to Nov. 30, has experienced a growing number of destructive and rapidly intensifying hurricanes over the past several decades, which scientists have linked to higher ocean temperatures from human-caused climate change.” 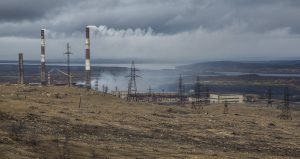 “Human influence is the culprit for warm and wet winters in northwest Russia.

“… northwest Russia experienced the warmest and wettest 2019/20 winter on record since 1902. Because of this, the permafrost melted, raising the risk of floods and landslides in the following spring, as well as rapid melting of snow and ice, which reduced available water resources and increased the risk of droughts in summer.” 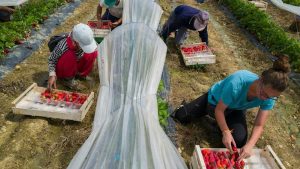 “Strawberry growers in France are leaving large quantities of fruit to rot in the fields, as unusually hot temperatures mean everything is ripening at once, overwhelming their capacity to harvest… southwestern France has seen 40 days straight of above-average daily temperatures – more than 10 to 15 degrees hotter than usual…” 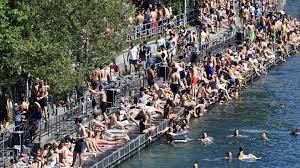 ““It will be hotter than usual,” according to Thomas Buchel, head of SRF Meteo. “New heat records are very likely. It would be surprising if it went in another direction”, he said.” …Another meteorologist, Joshua Gehring from the official weather service MeteoSwiss, said hotter weather “is a direct consequence of climate change”.” 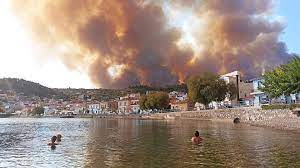 “Greece is bracing for the first heatwave of the summer season with meteorologists warning that, starting on Wednesday, temperatures in several parts of Greece will climb up to 37C (98.6F).” [picture from 2021 – no colossal fires yet] 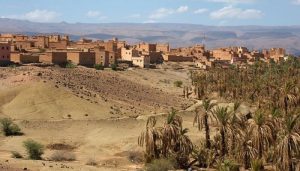 “Rising temperatures have also contributed to water evaporation, proving another source of water scarcity. Baraka also noted challenges resulting from the war in Ukraine, revealing that Morocco only has a four-month reserve of grains.” 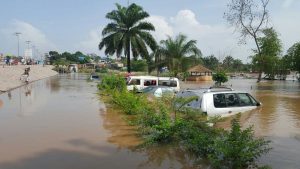 “Runoff in the Congo River basin, for example, is projected to increase by 50 percent, elevating flooding risks, especially flash flooding, across large parts of Central Africa… As oceans have warmed, Africa has experienced four times as many storms and more than a doubling in the number of cyclones since the 1970s.”

“Several residents in Umdloti north of Durban were left homeless. Part of a block of flats in a complex in the area washed away. Heavy rainfall and mudslides led to the ground collapsing around and under the buildings.” 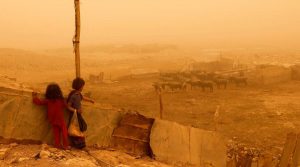 “Iraq is ranked as one of the world’s five most vulnerable nations to climate change and desertification. The environment ministry has warned that over the next two decades Iraq could endure an average of 272 days of sandstorms a year…” 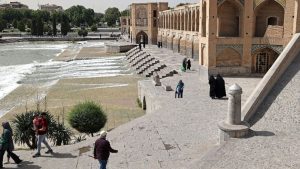 “The famed river bridges of the Iranian city of Isfahan are a beloved tourist draw — but much of the time their stone arches span just sand and rocks, not water. Drought and upstream water diversions have seen the Zayandeh Rood, “fertile river” in Persian, run dry since 2000, with only rare exceptions.” 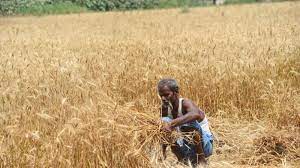 “The report by World Weather Attribution (WWA), a global initiative and collaboration of scientists around the world, said the intense heat has either damaged or reduced the quality of the yield…” 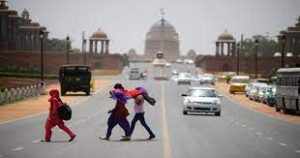 “A heat wave that’s made parts of India the hottest in 122 years may be a warning that heightened climate risks could drag on economic growth and worsen the nation’s credit scores. Sweltering temperatures across northwestern India may have added to inflationary pressures in the world’s second-most populous nation…” 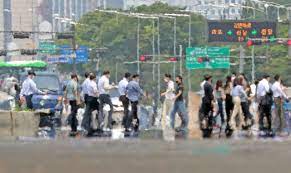 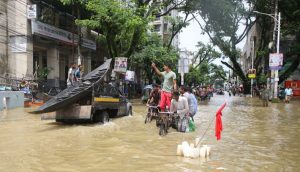 “‘Children are starving’: A cry for help from flood-hit Bangladesh…

“While the water had receded by Tuesday, the putrid smell and waterlogged walls bore witness to the havoc that had been wreaked on Sylhet for days. It will take a few more days before Afsar Ali’s home dries enough that he can begin the task of rebuilding his life. His house is still in knee-deep water.” 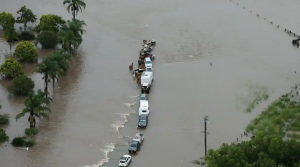 “More than 50 sites in the region registered over a metre of rain in a week during 2022, the Bureau of Meteorology says. The records were broken between February 22 and March 9 with some areas experiencing two and a half times their average monthly rainfall and others five times the amount.” 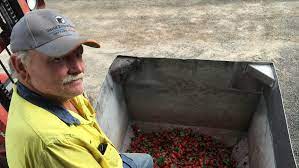 “Sunshine Coast strawberry farmers face a difficult season as continuing heavy rain means much of their early crop is chucked into bins.

“The roll-on effect means strawberry lovers may see a shortage at supermarkets and prices as high as $7 a punnet.” 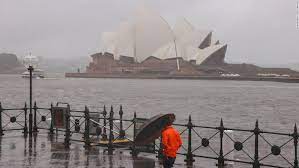 “The La Niña event, already in its second year, could yet persist into a third. The expected dissipation of the pattern has not progressed in the past two weeks, and two of the seven models used by the bureau project that the La Niña will last through winter.” 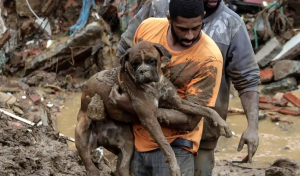 “What’s behind record floods across the Southern Hemisphere?

“…Behind most of these intense rain events lies a particular combination of weather conditions: a “cut-off low” over the coast, pinned in place by a “blocking high” out to sea. This configuration itself is not uncommon, but this year’s repeated events and their high impact have been unusual.” 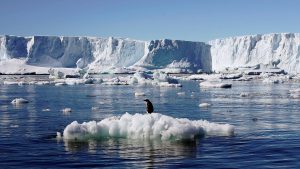 “The report shows that Antarctic ice sheets are melting, the continent’s climate is changing, its ecosystems are being impacted, and the Southern Ocean is warming, becoming more acidic and losing oxygen. Changes in Antarctica have global impacts.” 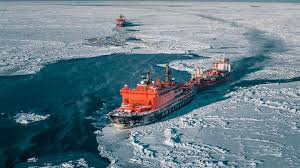 “…open-water ships could have been traveling through the Canadian Arctic Archipelago along the fabled Northwest Passage for more than two months of the year during the 2010s… Since 1979, the area of the Arctic that is safe for open-water vessels for 90 days of the year has increased by 35 percent…” 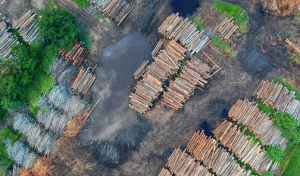 “Food and commodity companies are falling short of global commitments to end deforestation by the end of the decade, a new report found, risking missing a key target of last year’s COP26 climate summit. Only 19 out of 675 companies in industries like cattle, timber and palm oil have set targets…”