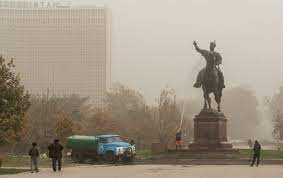 “In 2018, a cataclysmic storm engulfed the region of Karakalpakstan with salt left behind when the Aral Sea dried up.” https://eurasianet.org/severe-dust-storm-engulfs-uzbekistan 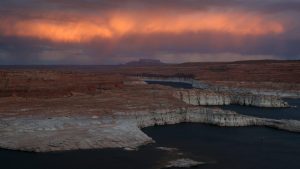 “To stop Kyrgyzstan’s electricity shortage from becoming a multi-year crisis, Bishkek has warned its neighbors that it must start keeping more water for itself… That will mean less water for farmers and power plants downstream in Uzbekistan, Tajikistan and Kazakhstan.” 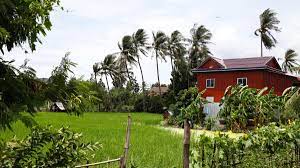 “Last year, Nget Srey’s paddy was almost ready to harvest when her 2½-hectare field became inundated with seawater, wiping out her crops, slashing her main source of income and destroying her way of life.” 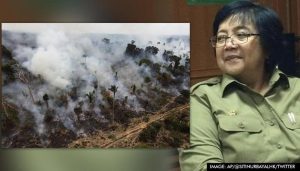 “Siti Nurbaya Bakar, the environment minister for the south-east Asian archipelago, which is home to the world’s third-biggest rainforest, said on Wednesday that “forcing Indonesia to zero deforestation in 2030 is clearly inappropriate and unfair”.” 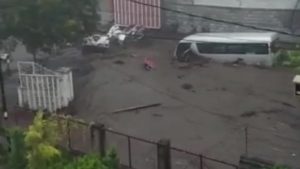 “Torrential rains on Thursday unleashed flash floods in Malang and the highland city of Batu [Java], inundating houses with mud and debris, while a wall of water destroyed local bridges.” 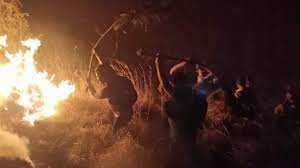 “A Wildfire Started in Komodo. Then Things Went Quiet.

“Anger swirled as activists posted about the latest fire to ravage Komodo island, home to the protected dragons. Shortly after, their Instagram was pulled down.” 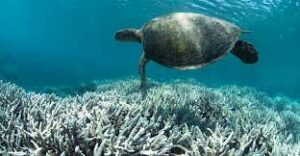 “5 major heatwaves in 30 years have turned the Great Barrier Reef into a bleached checkerboard.

“Just 2% of the Great Barrier Reef remains untouched by bleaching since 1998 and 80% of individual reefs have bleached severely once, twice or three times since 2016, our new study reveals today.”

“As the sea ice melts in the town of Barrow, residents of the Alaskan outpost find themselves facing an uncertain future…

“Since 1971, the average annual temperature in Utqiagvik has risen by 4.8°C from -13.5°C to -8.7°C. Houses built on permafrost are sinking into the ground, underground cellars are flooding and whaling is becoming increasingly dangerous.” 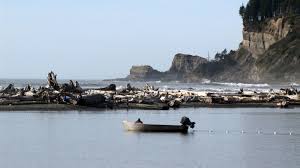 “The Rising Pacific Forces a Native Village to Move. Who Will Pay? Washington’s Quinault Nation wants to rebuild on higher ground, but $150 million is hard to find… 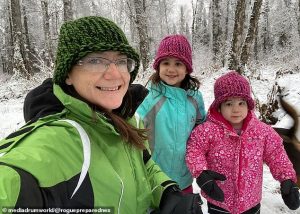 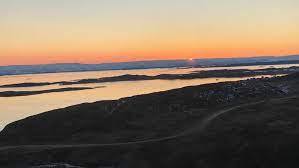 “October was Nunavut’s warmest on record, and climate change is to blame: meteorologist. 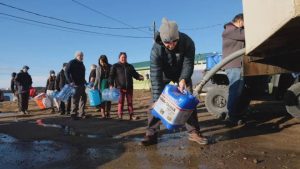 “Iqaluit’s water crisis has so far cost the municipality more than $1.5 million. And this is only the start…

“The city has been in a state of emergency since Oct. 12, when staff confirmed fuel contamination [thanks to melting permafrost damaging infrastructure] in the city’s treated water supply. Residents have been told the water is unsafe to drink even if it’s filtered and boiled.” 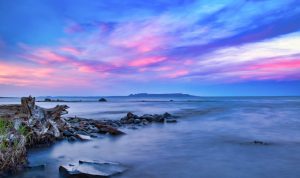 “The record-warm water temperatures over the Great Lakes fit into a pattern of warming lakes all over the planet, forced upward as human-caused climate change pushes air temperatures to record highs.

““I’m not surprised at all that the water temperatures are so warm,” said Sapna Sharma, a professor at York University who has studied ice for more than a decade.

“Warm lakes also fuel rain and snow… That phenomenon contributed to record-breaking lake effect snowfall in northern Michigan on Wednesday… Parts of northern Michigan, especially around Gaylord, got almost 12 inches of snow that day, more than any single-day snowfall in November on record.” 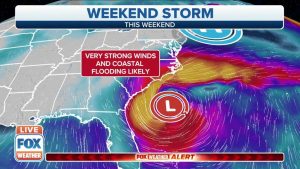 “A developing powerful storm will bring significant coastal and possibly historic flooding to parts of Florida, Georgia and the coastal Carolinas through this weekend.” 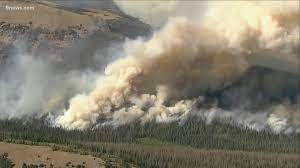 “Colorado forests may never be the same after historic 2020 wildfires.

“The impact on the climate continues long after the flames are out. Some areas burned by fire are not seeing forest regrowth they once did. “Even in some places where we have trees nearby, things are just too warm and dry for the forest to recover,” said Kyle Rodman, a research scientist.” 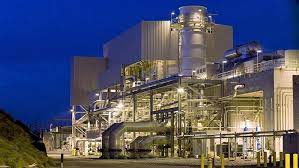 “Wildfires and Drought Force California to Rely on Natural Gas for Winter Electricity.

“This year, the state has leaned more on gas fired-power plants as extreme drought has cut hydropower output by more than half, while frequent wildfires often shut electricity imports from other states.” 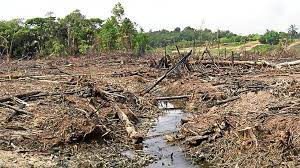 “The report published on Thursday said that cattle ranchers, loggers, miners, subsistence farmers and criminal groups have moved into areas formerly controlled by the Revolutionary Armed Forces of Colombia and are burning down forests to make way for legal and illegal businesses.” 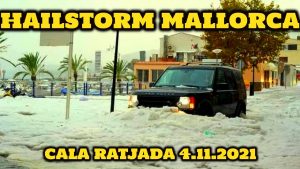 “It took just 15 minutes for streets in Mallorca to be filled with ice, witnesses said as they described what local media coined a “freak” hailstorm. The powerful hailstorm on Thursday left the city of Cala Ratjada on the Spanish island covered with thick layers of ice.” 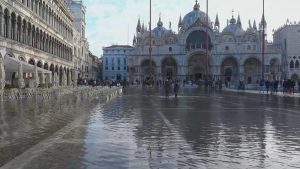 “Venice is particularly vulnerable to climate change due to its unique topography of long pointed wooden poles that were driven straight down into the seafloor, along with its 117 canals that flow through the ancient city.” 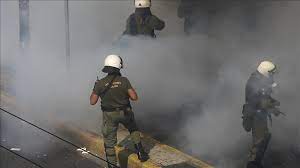 “Police clashed in Athens Friday with protesting firefighters demanding job contracts in the wake of massive wildfires. One firefighter was hurt by a stun grenade and five others were detained after police fired teargas and water cannon to disperse the demonstrators.”

“With an astonishing temperature of at 32.4C Veliko Tarnovo [90.3F], the country had its hottest November day on record, beating the 32.1C of Gorna Orahovitsa set on 1 Nov 1926.” 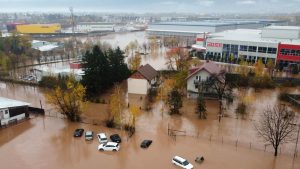 “Severe flash flooding caused by heavy rains following unseasonably warm weather has hit much of Bosnia. Power was knocked out in the capital, and a key oxygen facility for COVID-19 patients had to be evacuated.” 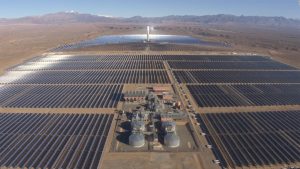 “Renewable energy projects, just like traditional ones, have fuelled dispossession, exploitation and socioeconomic exclusion across the region… Basically, the same oppressive system remains but with a different source of energy.” 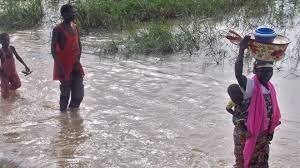 “How northern Ghana farmers are battling drought and floods from climate change.

“Many farmers in the northern parts of Ghana are yet to recover from the shock of the devastating flooding that hit the area in last August and September, causing massive destruction of farms.” 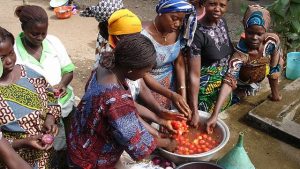 “Benin families fear famine if climate crisis is not tackled…

“Like many people across Benin, Odile’s parents are farmers who, in recent years, have been struggling to cope with droughts. Originally from Atacota, in the North-West, her family were forced to migrate to Borgou, 130 miles South-East, in search of more fertile soil.” 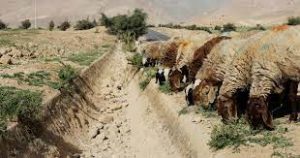 “‘All the trees have died’: Iraqis face intensifying water crisis…

“Four years ago, the stream running through Iraq’s al-Hamra village dried up. Now, “all the trees have died”, said Abdullah Kamel who used to farm citrus fruit in the village in Saladin governorate north of Baghdad.” 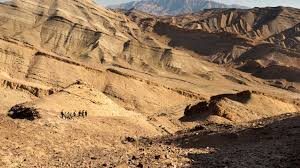 “Iran is in “post-crisis mode” as it struggles to deal with a water scarcity problem that has already boiled over into protests, the former deputy head of the country’s environment department has warned…

“Kaveh Madani told The National that Iran’s water problems have become so dire that its ecosystems are beyond saving.” 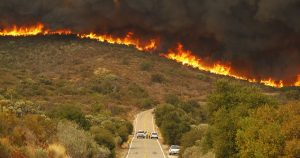 “‘Everything I feared was coming true’: Victims of the climate emergency tell their stories.

“At Cop26, nations have gathered to limit the impact of global heating – but many across the planet are already feeling the colossal impact.”