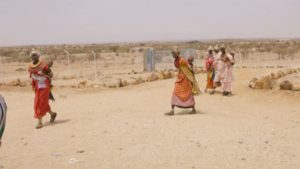 “Wells are dry, millions of livestock are dead and people’s livelihoods have vanished. President Uhuru Kenyatta has declared the situation a national disaster. The United Nations says that 2.4 million are at risk of going hungry next month.” 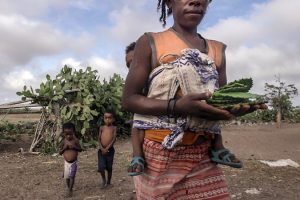 “Alice Rahmoun, of the UN’s World Food Programme (WFP), said that people in some areas were surviving by eating locusts and cactus leaves. And to make matters worse, cacti are now dying from the lack of water, she added.” 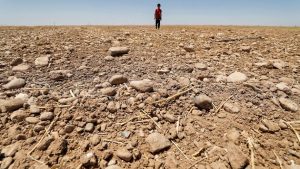 “Half of Syria has been displaced by war. Now record drought threatens millions more…

“…today Syria is in the grips of the worst drought in seventy years. The Khabour has run completely dry like other rivers, lakes and dams across the war-ravaged country, where crops are failing, livestock is dying and clean drinking water is becoming increasingly scarce.” 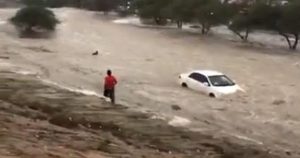 “After a summer of searing heat and record temperatures, Kuwait is bracing for the arrival of the rainy season…

“The extreme rise in temperatures and shifting rainfall patterns are suggesting that climate change is impacting Kuwait as well, along with the rest of the world.” 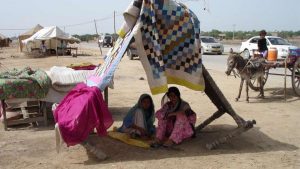 “Amnesty International has documented the lives of the people of Jacobabad in Pakistan – one of the world’s hottest cities – highlighting the immediacy of the climate crisis for some of the world’s poorest people.” 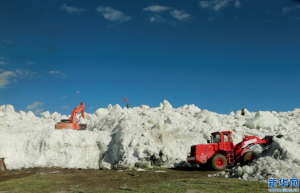 “Local temperatures have risen more than 2 degrees Celsius since the 1950s, more than twice the global average, amplifying melt and intensifying rains. This has caused a dramatic increase in the amount of earthen material coursing through the region’s rivers…” 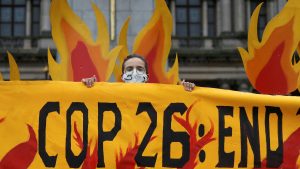 “China and India cast pall over climate ambitions ahead of COP26…

“China and India cast a pall over the opening of the COP26 summit in Glasgow when they rejected calls to set tough new climate targets, calling into question whether the world’s biggest polluters will start cutting emissions this decade.” 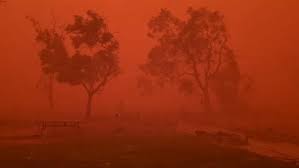 “Winds up to 93 kilometres per hour brought the wall of thick brown dust through the town of about 270 people. As the storm swept through, typically blue skies gave way to a hazy orange hue, giving the town an apocalyptic feel.” 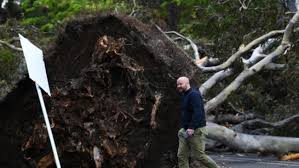 “Cleanup begins after once in a decade storm lashes Victoria.

“More than 100,000 Victorians remain without power after freak wind storms lashed the state yesterday, bringing down trees, powerlines and wreaking havoc on hundreds of homes.
The winds – of nearly 150km an hour – were the strongest seen in Victoria in more than a decade…” 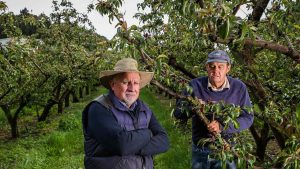 “Fruit growers and vineyard owners are reeling after Thursday’s freak, destructive hailstorm, which has caused an estimated $100m in damage to fruit crops, wiped out entire vineyards and collapsed and flooded buildings.” 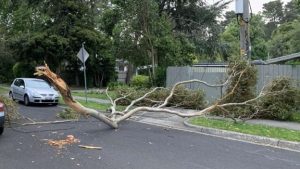 “Changing temperatures in the Indian Ocean may be helping drive a spate of damaging weather across Australia’s east coast.” 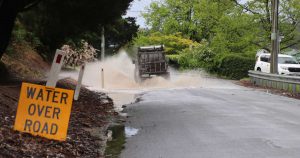 “Rain drenches Tasmania as part of one of wettest Octobers on record.

“Tasmania is on track to chalk up one of its wettest Octobers on record, with another deluge hitting the area on Friday. Bureau of Meteorology forecaster Brooke Oakley said October was not likely to be the state’s wettest on record — but it would not fall far short…”

“Conservationists in Chile aim to freeze water in man-made glaciers… The goal is to store 100 million liters (26.4 million gallons) of water next year…

““The Nilus Project seeks to help resolve the huge water crisis that we are facing both in Chile and the world,” Enrique Gellona, ​​director of the project, told Reuters.” 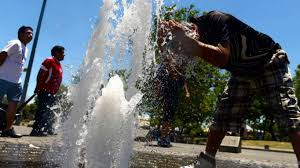 “Chile didn’t escape the extraordinary heat wave which is affecting Argentina and Uruguay. 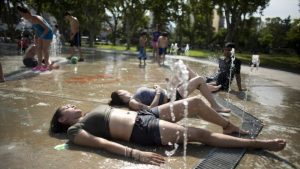 “San Antonio Oeste rose to 38.6C [101.5F] and Viedma to 36.4C pulverizing their monthly records. A cold front is advancing in these hours.” 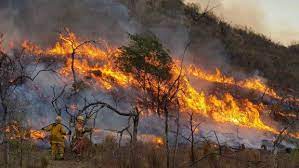 “The fire affects the provinces of Catamarca , Chaco , Corrientes , Entre Ríos , Tucumán , Jujuy , Córdoba , La Rioja and San Luis . The most critical situation is that of Jujuy.” 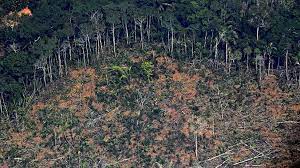 “Brazil’s greenhouse gas emissions increased by 9.5% in 2020 largely due to increased deforestation in the Amazon during the second year of far-right President Jair Bolsonaro’s government, said a report published on Thursday by climate change experts.”

“Extreme weather conditions, from massive flooding to severe water shortages, have rocked cities and small communities alike in the heart of the Brazilian Amazon this year, a trend experts attribute to climate change and human actions.”

“”California is a sentinel state. It’s like a canary in a coal mine,” said Justin Mankin, a Dartmouth College professor who specializes in climate change. “The state is a crucial bellwether… And it’s not looking good.”” 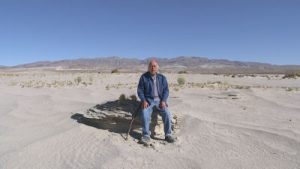 “The Paiute tribes of eastern California have a deeply alarming insight into the future. We must listen to their story, for soon it may be our story too. The indigenous people here are being encircled by three inter-connected threats: drought, dust storms and wildfires.” 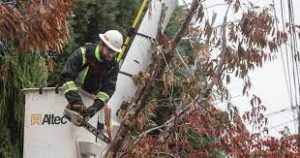 “The combination of lots of rain, microbursts of wind and leaves is a doozy; trees are not built for that kind of punishment. “When the leaves are on, the canopy acts more like a sail; it catches the wind,” said Dave Bayard.” 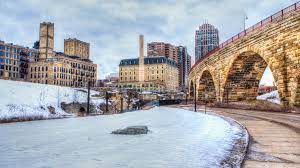 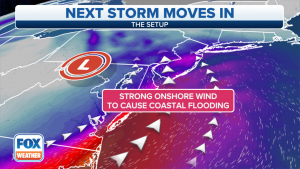 “The anticipated flooding could be the worst since 2003′s… thanks to the combination of onshore flow, astronomically high “king tides” and the gradually accrued effects of rising seas spurred by human-induced climate change.” 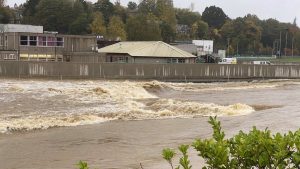 “Two bridges swept away amid flooding in Scottish Borders.

“Torrential downpours overnight have caused flooding and disruption across the UK, from Scotland to down to Cornwall, with multiple flood warnings in place as heavy rain continues.” 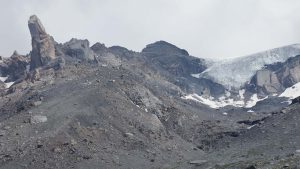 “Climate threats: living in the shadow of a crumbling mountain.

“The COP26 summit aims to secure more ambitious climate action from participants. For some it’s already too late. At the popular Alpine resort of Kandersteg in the Bernese Oberland, villagers live with the threat of the nearby Spitzer Stein mountain tumbling down.” 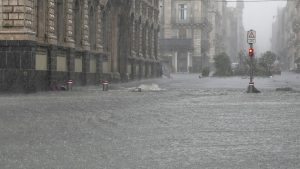 “Storm Apollo set to cause heavy rain across parts of Europe following flooding in Sicily.

“A rare weather system is expected to cause heavy rain across parts of Europe over the coming days, just days after severe flooding hit Sicily.” 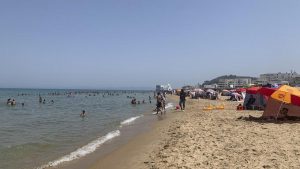 “September 2021 in Tunisia was extremely hot. With a national temperature anomaly of +3C above the 1981-2010 average it was the hottest September on record.

“It was also the driest on record. This after the hottest summer on record. Exceptional.” 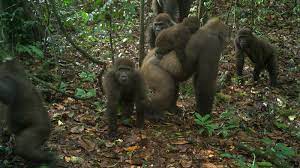 “Deforestation soars in Nigeria’s gorilla habitat: ‘We are running out of time’.

“Afi River Forest Reserve (ARFR), in eastern Nigeria’s Cross River state, is an important habitat corridor that connects imperiled populations of critically endangered Cross River gorillas. But deforestation has been rising both in ARFR and elsewhere in Cross River…” 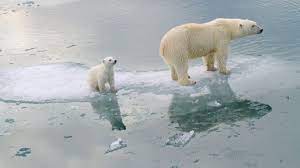 “In Nunavut, one of Canada’s northern territories, Inuit people are allowed to hunt polar bears. Over the years, the Inuit hunters have been sending muscle and fat samples to York University. It is these fat samples, dating back to around 2010, that Galicia and her team looked at for their findings.” 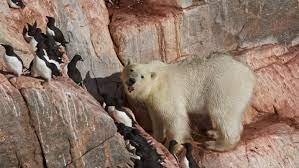 “Wildlife research scientist Paul Smith… has witnessed an earlier ice melt that leads to bears coming to shore sooner… “The bears are swimming onto islands where there are nesting colonies of birds, and gobbling up thousands of eggs,” said Smith…” 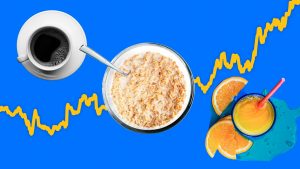 “The cost of food commodities that make up a typical breakfast has soared to its highest point in a decade under the strain of bad weather and supply-chain crunches, providing another in a long list of upward pressures on global inflation.” 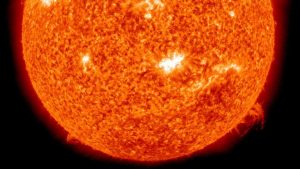 “A major solar flare was discharged from the Sun yesterday, one of the strongest yet in our star’s cycle, with the flare expected to reach the Earth this weekend.”

You can read the previous ‘Climate’ thread here. Solar flare allowing, I’ll be back on Monday with an ‘Economic’ thread.