A rare Sunday thread, as I have to be away from my desk Monday through Wednesday. Back Thursday! 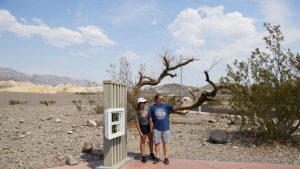 “Death Valley, Calif., soared to a searing 130 degrees on Friday. If confirmed, it would match the highest known temperature on the planet since at least 1931, which occurred less than a year ago.

[The two higher readings in Death Valley, 1913, and Tunisia, 1931, are of questionable accuracy]. 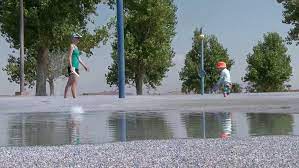 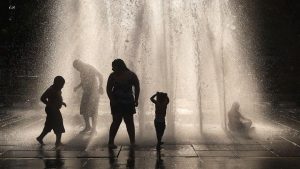 “Nights are warming faster than days in the U.S…

“Abnormally high nighttime temperatures can increase the risk of heat-related hospitalizations and deaths because prolonged stretches of hot weather prevent people from cooling off from the day’s heat.” 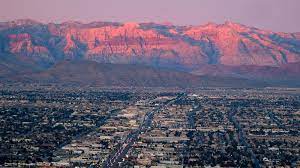 “‘We live in a desert. We have to act like it’: Las Vegas faces reality of drought…

“Lake Mead, the vast reservoir that supplies Las Vegas with 90% of its water, has now plummeted to a historic low, meaning Nevada faces the first ever mandatory reduction in its water supply next year.” 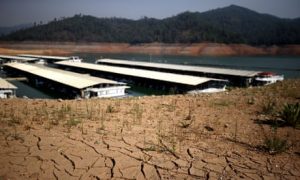 “In California’s interior, there’s no escape from the desperate heat: ‘Why are we even here?’

“…Researchers have been warning of such extreme heatwaves for decades, he said, but the barrage of heat surges that California and the western US have been alarming, he said. Temperature records are being broken earlier than expected or predicted.” 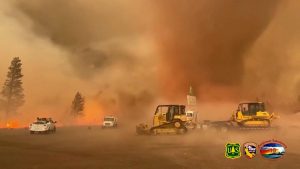 “Newly released footage of the Tennant fire in California, filmed on 29 June, shows a fire tornado near the Klamath national forest. Large wildfires can heat air so much that huge clouds develop. In strong winds, these can rotate and sometimes produce a tornado, or fire whirl.” 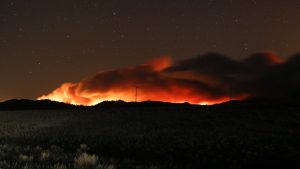 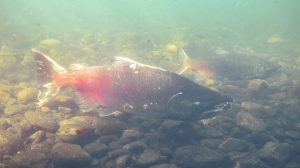 “The drought is making the Sacramento River so hot that “nearly all” of an endangered salmon species’ juveniles could be cooked to death this fall, California officials warned this week.” 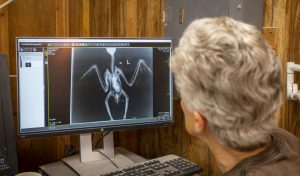 “Baby hawks in Oregon bailed from nests amid heatwave: ‘They had no choice’…

“…the center took in nearly 50 nestling Swainson’s and Cooper’s hawks after they leaped from their nests in the extreme heat wave that baked the Pacific Northwest last week. Thirteen of the raptors suffered injuries severe enough they had to be euthanized.” 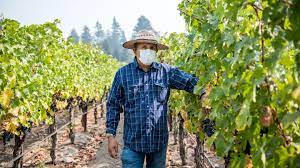 “The heat wave that recently hit the Pacific Northwest subjected the region’s vineyards to record-breaking temperatures nine months after the fields that produce world-class wine were blanketed by wildfire smoke.” 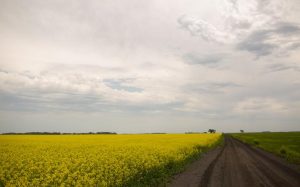 “The all-important Canadian canola crops, used to manufacture cooking oils and animal feed, is maturing weeks early due to the extreme heat the area is witnessing. The early crops may not produce the pods containing the small dark seeds crushed for their oil.” 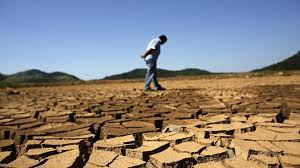 “Rainfall in the agricultural region of Minas Gerais was the lowest on record in the summer months, which stretch from January to April in Brazil. That’s normally when coffee plants soak up moisture… But this year, the rains never came.” 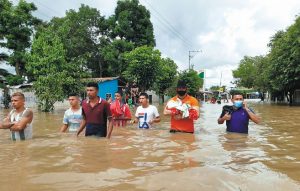 “Colombia – Over 5,000 Families Hit by Floods in Magdalena After Rivers Overflow...

“As of 07 July, as many as 5,576 families were affected. The Governor of Magdalena, Carlos Caicedo, said humanitarian aid including drinking water, food, and medical supplies has been distributed to 2,000 residents of nine neighbourhoods.” 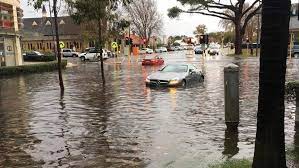 “And hit they did! Crazy video footage shared by friend of So Perth, David Gardiner shows that it’s a wee bit wet in Perth today.” 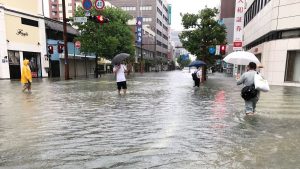 “Japan’s weather agency issued a heavy rain warning for parts of Japan on Saturday, leading local authorities to direct some 245,000 residents to take immediate action to stay safe as per the highest level 5 alert…

“According to the weather agency, rainfall in Satsuma, Kagoshima Prefecture was 96.5 millimeters [nearly 4 inches] per hour, setting an hourly rainfall record for the town…” 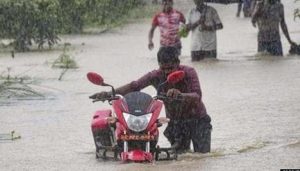 “The Himalayan Nation, Nepal has been witnessing heavy floods, landslides and, inundation induced by heavy rainfall for more than a month now… Flash floods triggered by heavy rains have claimed the lives of many people…” 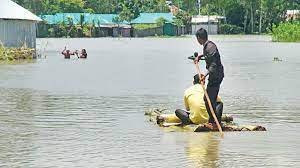 “Worsening flood situation in the north [of Bangladesh], thousands marooned…

“We are deeply concerned regarding the worsening floods in Sirajganj and Lalmonirhat districts, due to the rising water levels of Jamuna and Teesta rivers.” 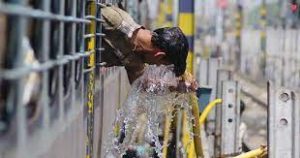 “Beating the merciless heat is hard in the Indian desert city of Sri Ganganagar, a reality facing millions across the vast country as the climate changes in the coming decades.” 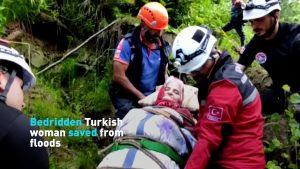 “Watch rescuers save this bedridden Turkish woman from floods.

“Heavy rains cause massive flooding and evacuations in northwestern Turkey. This bedridden 85-year-old woman was one of those affected but couldn’t leave her home because she couldn’t walk.” 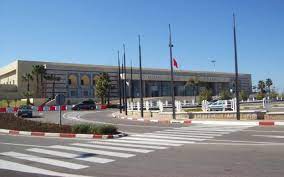 “10th July was scorching hot in Morocco. Some places had their hottest day on records:

“More record can fall in the next 2 days.” 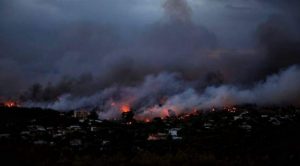 “Forest fire breaks out on Island of Ciovo in Croatia.” Photos: 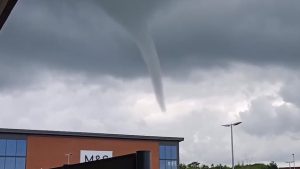 “It comes after a tornado is believed to have ripped through east London last month, unleashing widespread damage…” 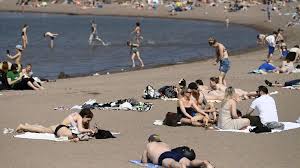 “A stifling and persistent heatwave is sending Finns flocking to beaches and emptying stores of air conditioners, replicating extreme climatic conditions at similar latitudes across the Atlantic, where record temperatures have killed hundreds.” 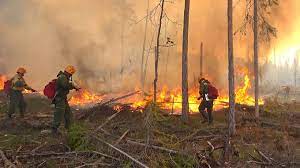 “Wildfires ravaging northeastern Siberia have spread by nearly 70,000 hectares in the past day, marking a 17.5% increase in a single day, the Kommersant business daily reported Friday, citing the regional emergencies ministry.” 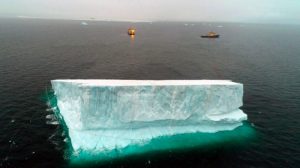 “Russia’s powerful oil and gas sector is increasingly feeling the pressure. But the industry leaders have no intention to cut drilling and battle climate change. Instead, they call for ‘climate adaptation’ and argue that new grand projects in the Arctic are developed in a “green” and environmentally friendly manner.” 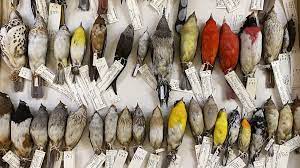 “Why it matters that climate change is shrinking birds.

“Because size determines organisms’ behaviors, survival and contributions to the functioning of natural systems, widespread shrinking of birds has important implications for the ecosystem services that birds provide to people.” 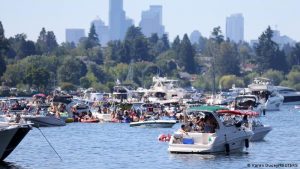 “As climate change makes itself felt through heatwaves and floods, are our mega-cities ready?

“…There is already cause for some concern, as shown by the heatwave earlier this month which saw temperatures reaching 20 degrees Celsius higher than normal in parts of the northwestern United States and southwestern Canada.” 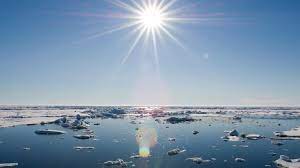 “A study published in the journal Science finds that our earth’s oceans are warming 40 percent faster than the IPCC reported in 2013.

[Transcript of Kevin Trenberth, a distinguished senior scientist with the National Center for Atmospheric Research, speaking with Living on Earth’s Steve Curwood.].

You can read the previous ‘Climate’ thread here. I have to be away from my office Monday through Wednesday next week but I’ll be back on Thursday probably with the climate.

A huge thank you to all my Patreons and anyone who has donated. It is enormously appreciated and helps incentivise me to keep grinding these out, even on days when I’m swamped or knackered.