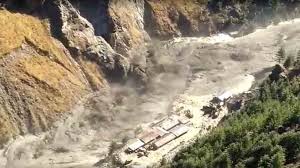 “As many as 150 people were feared dead in northern India after a Himalayan glacier broke and crashed into a dam early on Sunday, with floods forcing the evacuation of villages downstream…

“It came very fast, there was no time to alert anyone,” Sanjay Singh Rana, who lives on the upper reaches of Raini village, told Reuters by phone. “I felt that even we would be swept away.”

“Locals fear that people working at a nearby hydro-power project had been swept away, as well as villagers roaming near the river looking for firewood or grazing their cattle, Rana said. “We have no idea how many people are missing.””