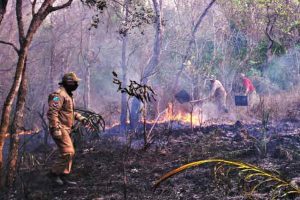 “Under stress from a historic drought, large swathes of forest and wetlands in central South America known for their exceptional biodiversity have been ravaged by devastating fires.

“Experts on Friday said wildfires in a region that spans Argentina, Brazil, Bolivia and Paraguay, especially the region between the Paraguay, Parana and Uruguay rivers, have become critical in 2020.

“”There has been a dramatic increase in fires. In Argentina there has been an increase of around 170 percent, it’s very serious,” said Elisabeth Mohle, an environmental politics researcher at Argentina’s San Martin National University.” 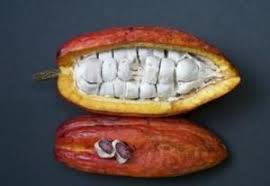 “According to Rafael Mahecha, cocoa leader, the intense heat wave that is reported in the Huilense region [Colombia] has affected nearly 2000 hectares of the product, said the cocoa leader, due to the lack of water for production… 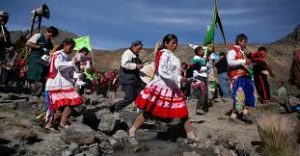 “Climate scientists say that glaciers in the tropical Andes have been reduced by nearly a quarter in the last 40 years. Some scientists predict that such glaciers could disappear entirely by 2070.

“These changes have not only affected agricultural practices in the Andes, but also, as witnessed by Qoyllur Rit’i pilgrims, cultural ones, too.” 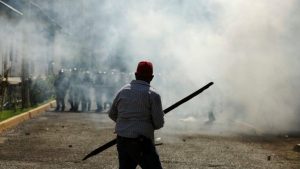 “Mexico has reached a deal to settle its water debts with the US despite widespread protests by Mexican farmers, some of which turned violent.

“A bilateral treaty signed in 1944 says the two countries must share water sources along their arid border. Mexican farmers say they need the water themselves, in what has been one of the driest years in decades.” 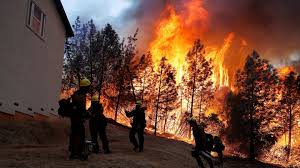 “Already in the midst of the worst wildfire season on record, California faces the most favorable conditions for instigating large wildfires so far this year, beginning Sunday afternoon and lasting into Tuesday.

“The combination of hurricane-force wind gusts and extremely dry conditions mean that the potential of a fire starting, and spreading rapidly, is unusually high.” 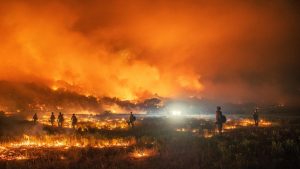 “This year’s historic wildfire season, Lester says, is raising literal and metaphorical red flags that forests in Colorado and across the American West are unhealthy.

“Colorado has experienced significant drought this year, drying out vegetation and seeing no precipitation as relief. When the Cameron Peak fire, the largest fire in Colorado’s recorded history, made a 30,000-acre run last week, assisted by high winds, Larimer and Grand counties were in “severe” or “extreme” drought.” 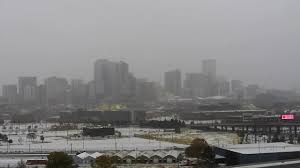 “An unusually cold arctic air mass threatens to set at least three new record low temperatures in Denver over the next few days. Two of those records are nearly 100 years old…

“We [could] have a new all-time early coldest temperature recorded less than two months after setting the all-time latest record high. That was 101 degrees on Sept. 5, 2020.” 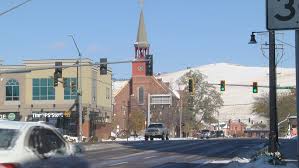 “The National Weather Service in Missoula said the snowstorm on Saturday was the biggest October snowstorm in over 100 years with 13.8 inches recorded at the airport. 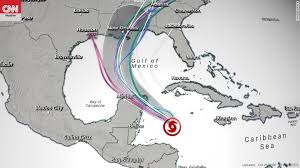 “Zeta becomes the record-tying 27th named storm of the 2020 Atlantic hurricane season, matching 2005 for the most names used in a season.”

“Several caravans were destroyed or damaged as high winds swept through [UK] holiday parks last night. One resident described a ‘mini tornado’ hitting a park in Eastchurch, on the Isle of Sheppey [Kent], where she has a holiday home.” 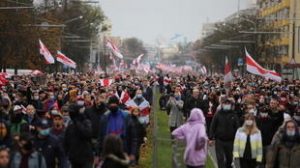 “Thousands of climate activists have added their names to a new campaign spearheaded by Greta Thunberg, asking the European Commission to retract a farming policy that they say would make it impossible to reach the EU’s climate goals… 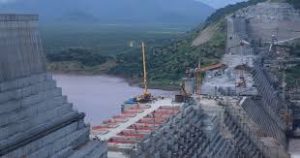 “Ethiopia has denounced “belligerent threats” regarding a dispute with Egypt and Sudan over the operation of its massive hydropower dam, hours after US President Donald Trump suggested Cairo would eventually “blow up” the dam if the deadlock was not resolved…

“On Friday, Trump called for a resolution to the standoff over the Grand Ethiopian Renaissance Dam during a phone call with Sudanese Prime Minister Abdalla Hamdok.” 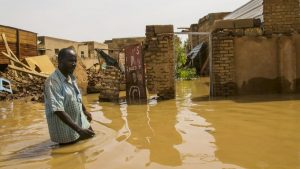 “At least 3.6 million people were affected by floods and landslides triggered by heavy rains across East Africa since June, the U.N. humanitarian agency said in a report Saturday.

“”Water levels of several lakes in Kenya and Uganda are rising, impacting thousands of people,” the U.N. Office for the Coordination of Humanitarian Affairs (OCHA) said.” 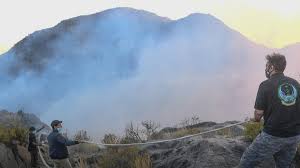 “Specialized Saudi emergency teams devised a plan to evacuate a number of villages in Jabal Gulamah in Tanuma governorate in anticipation of the continuation and spread of a fire that raged in a mountainous area littered with dry trees and grass.

“Firefighting teams that use aircraft are struggling to extinguish it for the fourth day in a row. 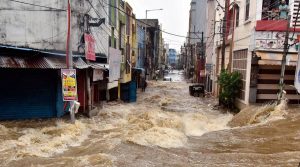 “India’s southern city of Hyderabad is known as a high-tech hub — but its infrastructure is looking increasingly dated in an era of strengthening climate change impacts. The city… this month saw its heaviest rainfall in a century, which left 70 dead and 5.7 billion rupees ($77 million) in damage to roads and drains, officials said.

“In many cities in India, which find themselves increasingly caught between worsening droughts and deluges, urban planners have rarely considered growing climate risks when designing projects.” 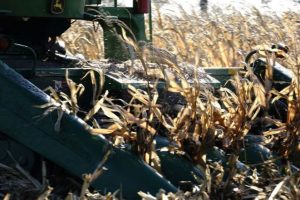 “China’s government is discussing permits for millions of tonnes of additional corn imports over the next year, three industry sources told Reuters, amid a surge in animal feed demand and after storms and drought damage tightened domestic supplies.

“A round of new import orders from China would make it the world’s top importer of corn for the first time and likely drive up global prices of corn and other grains.

“That would amplify food inflation caused by disruptions to global supply chains due to the coronavirus pandemic.” 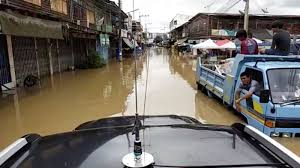 “Meantime, an extra tropical depression in the Pacific Ocean intensified rapidly into a new storm – Molave…” 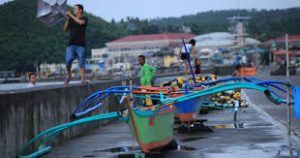 “Thousands of villagers were forced to flee their homes in the Philippines as a fast-moving typhoon made landfall, flooding rural villages, ripping off roofs and toppling trees and powerlines, officials said…

“At least 25,000 villagers were displaced with about 20,000 taking shelter in schools and government buildings which were turned into evacuation centres…” 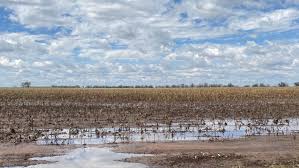 “Their crops were insured but Mr Cullen said the damage sustained was a kick in the guts after three tough years of drought.”

“From near-record high temperatures to rain, gales and frosts – Labour weekend’s fine weather is all over for the South Island [New Zealand].” 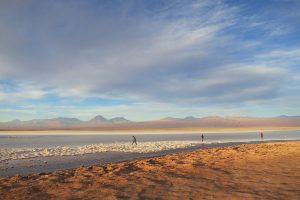 “A considerable amount of microplastics have been found by scientists to be present in remotely located polar seas, including the seabed of Antarctica.

“According to scientists, microplastics are just as abundant in the Antarctic region compared to their amounts in the Mediterranean and the North Atlantic.” 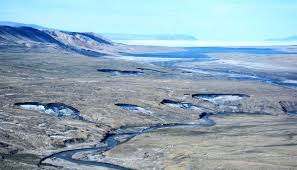 “25% of the northern hemisphere is permafrost. By all appearances, it is melting well beyond natural background rates, in fact, substantially!

“…In the Canadian High Arctic: ‘Observed maximum thaw depths at our sites are already exceeding those projected to occur by 2090.’

“According to Susan Natali of Woods Hole Research Centre in Massachusetts, the Arctic has already transformed from a carbon sink to a carbon emitter.” 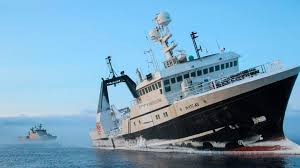 “A Horrible Place for an Oil Spill: Melting sea ice is opening up the Arctic to more ships. The results could be catastrophic.

“…thanks to the climate crisis, temperatures in the Arctic are on the rise and the region’s sea ice is on the decline. New opportunities are opening up to expand the fishing, research, pleasure, transport, mining, and oil and gas industries.” 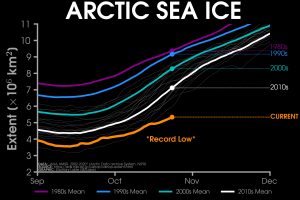 “Even if net emissions from human activities somehow became negligible, this positive feedback will accelerate heating.”