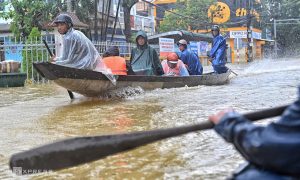 “Hundreds of thousands of homes are submerged and at least 132 people have been killed as some of the worst flooding in decades hits Vietnam and Cambodia, affecting more than 5 million people…

““We have grave fears that the flooding will go from bad to worse and that it [will] be overwhelming for even the most prepared and resilient communities, with many more typhoons and storms predicted in the next month,” Viet Nam Red Cross told the ABC…” 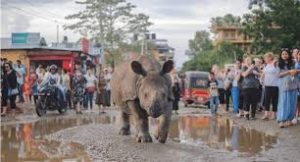 “Nepal’s population of one-horned rhinoceros …are faced with a new threat: changes in their living environment due to a rapidly-warming atmosphere.

“Eight rhinos have been found dead inside Chitwan National Park since 11 July – half of them due to unprecedented floods on the Narayani River that submerged their grassland habitat.” 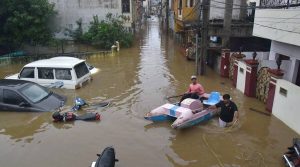 “In simpler terms, there has been a steady increase in the number of very heavy & extremely rainfall events in India in the last 3 years.” 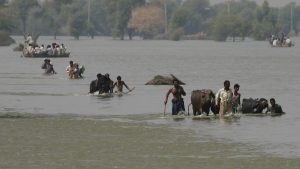 “As many as 1.4 million children face homelessness and disease following some of the worst ever floods in Pakistan, warns Save the Children… children are living outdoors, schools have been destroyed or damaged and agricultural crops have been lost. In many rural districts, people have only five days’ worth of food stock left.

“Khuram Gondal, Save the Children’s Country Director in Pakistan, said: “During the current monsoon, Sindh province has experienced some of the heaviest rainfall for nearly 90 years and more heavy rains are expected.” 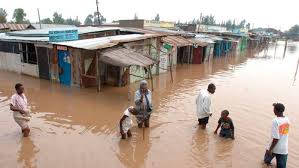 “…floods have been caused by delayed heavy rain pounding the region [Barringo, Kenya] for almost a month now.

“The raging water that has broken its banks has displaced thousands, washed away farm products and animals, leaving houses fully submerged in water, with roads now submerged in water. Locals claim that millions worth of property has been destroyed by the water and now are forced to use boats to move around where once motor vehicles and bicycles were the norms.” 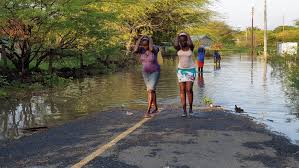 “Over the past six months, the lakes of Kenya’s Rift Valley have risen to levels not seen in at least half a century. This follows one of the wettest periods in East Africa in living memory.

“Above-average temperatures in the Indian Ocean have caused consecutive years of extreme and erratic rainfall, resulting in frequent and unusual showers on the slopes and rivers that feed the lakes.” Video: 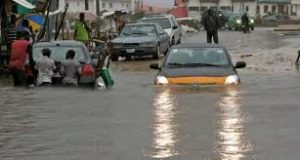 “On 6 October 2020, flood levels at the hydrological stations monitored in Niamey (Niger Republic) and Malan Ville (Benin Republic) reached the red alert zone due to the intensity of the torrential rainfall and caused flooding in Jigawa, Kebbi, Kwara, Sokoto, and Zamfara state (amongst other states) affecting 91,254 people or 15,209 households…

“The situation in Kebbi [Nigeria] – the country’s biggest rice-producing state – is especially dire, as vast farmlands are completely submerged due to the most recent rains.” 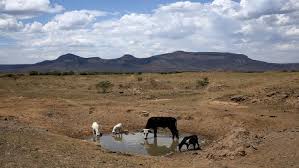 “While the Western Cape [South Africa] has been blessed with much rainfall [after running, in parts, entirely dry in 2018], the central Karoo region is still struggling with a seven-year drought and farmers are desperate for help…

““There are farms entering the second year with no water at all,” a Klein-Karoo stone fruit farmer told Fresh Plaza. 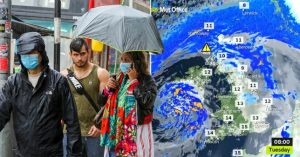 “Storm Barbara will bring gale-force winds and torrential rain to Kent [UK] from the early hours – adding to an already record-breaking month of weather for the county.

“Saturday, October 3 was the UK’s wettest day since records began in 1891 with enough rainfall in a single day to fill Loch Ness.” 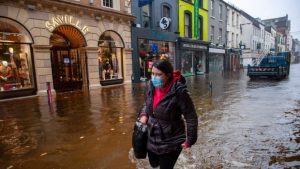 “Cork city centre [Ireland] was hit by severe flooding on Tuesday morning with many business owners having to bail out waters after the river Lee burst its banks. Gardaí were forced to close off a number of low-lying streets as flood waters, up to a foot high in places, began to make some streets impassable. “Speaking in the Dáil on Tuesday, Taoiseach Micheál Martin pledged supports for businesses and residents hit by the flooding.” 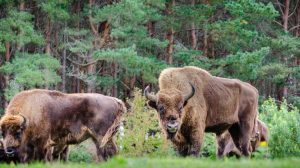 “In this episode of Climate Now, as part of Euronews’ Green Tomorrow initiative, we report from Romania to on the link between biodiversity and climate change, with projects to build bridges for bears and bring back the bison.” Video: 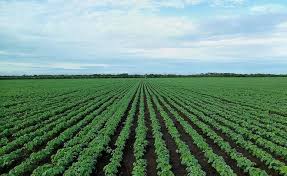 “Russia’s Siberia has seen its warmest spring and summer on record, reports World Grain. Although the unusual weather resulted in a record number of wildfires and the worst pest invasion in years, there appears to be a silver lining for Russian agriculture, as the country stands to gain a considerable amount of arable land if the trend continues.”

[This is akin to gleefully collecting fish from seabed exposed by an impending tsunami].

“Kahului [Hawaii] experienced 94-degree heat Monday, tying the record set in 2019 and 1984 and marking the fourth day in a row that Central Maui tied or broke a heat record. 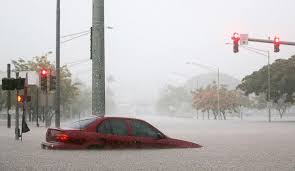 “About 40% of the U.S. population lives in a coastal area and in Hawai’i, nearly everyone is vulnerable to the effects of tropical storms and hurricanes.

“Tropical cyclones, regionally known as hurricanes or typhoons, have been moving across ocean basins faster since 1982, according to a new study published in Environmental Research Letters.” 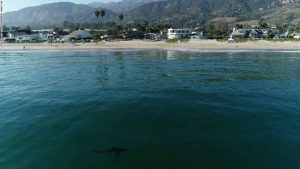 “A shark lab in California tagged more sharks off the southern coast this year than ever before, raising questions researchers are unable to answer…

“While researchers don’t know why the sharks are hanging around, Lowe said they suspect it could be related to food sources or a result of climate changes.” 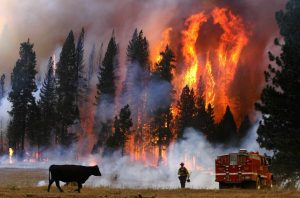 “If by “apocalyptic” we mean simply “catastrophic,” then yes, the wave of wildfires that began in Southern California in early September has been apocalyptic…

“The consequences, once local, are now regional: friends from Los Angeles to Vancouver can compare dire air-quality data.” 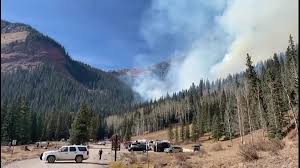 “”The new starts and explosive growth of fires throughout the northern Colorado Front Range over the past week, including the Cameron Peak, Cal Wood, and Lefthand Canyon fires, has led to this decision,” said Tuesday’s release from the US Forest Service…” 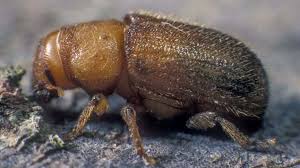 “Results from a study published in the Journal of Biogeography indicate that wildfires may play a role in accelerating climate-driven species changes in mountain forests by compounding regional warming trends.

“The study examined temperatures within forests in a region of Colorado that has experienced wildfires and spruce beetle outbreaks within the last 10 to 15 years.” 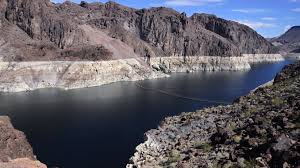 “The largest and most intense drought in years is engulfing the Western US and threatens to grow larger and more severe in the coming months.

“The drought has already been a major contributor to record wildfire activity in California and Colorado. Its continuation could also deplete rivers, stifle crops and eventually drain water supplies in some Western states.” 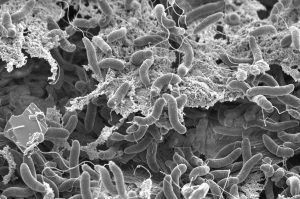 “In October 2018, three weeks after Hurricane Florence pummelled swaths of North Carolina, Eddie Clinton, a retired schoolteacher opened a cooler full of shrimp from an acquaintance who went on a fishing expedition 130 miles south in a river that empties into the Atlantic Ocean…

“The next day, he woke up feeling weak. By evening, struggling to breathe, he was rushed to an area hospital.” 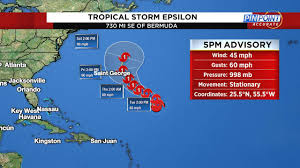 “With maximum sustained winds of 40 mph, it is the 26th named storm of the extraordinarily busy 2020 Atlantic hurricane season, and puts us one tropical storm away from tying 2005′s record.” 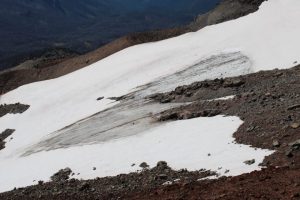 “Mourners Hold a Funeral for a Dead Oregon Glacier:

“The funeral held for Clark Glacier took inspiration from a funeral held for dead ice in Switzerland and Iceland last year and is part of a growing sense of grief for the collapse of the natural world at the hands of unfettered capitalism.” 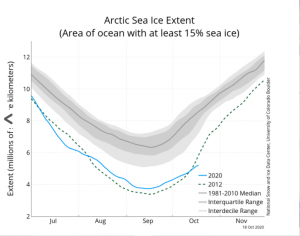 “Time is running out for the Arctic. The region continues to warm at two or three times the global rate and scientists now predict that we could see Arctic summer ice disappear as early as 2042.

“As the realization sets in that existing emission reductions and renewable energy programs in place won’t be enough to save the Arctic, alternative geoengineering projects have gained traction as scientists look for a last-ditch solution.” 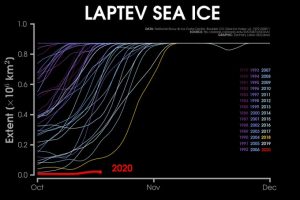 This graph shows that re-freezing has yet to meaningfully occur in the Laptev Sea, where, I might add, extensive methane gas-bubbling has been observed by scientists.

Image courtesy of Zack Labe. Article re methane seepage from 2019:

“Even amid a pandemic that has killed more than 1 million people, infected over 40 million, and tanked economies, people around the world are still extremely worried about the threat posed by climate change.

“A recent poll from the Pew Research Center found that a median of 70 percent of respondents in 14 countries identified climate change as a major threat to their countries, while 69 percent expressed the same level of worry about the spread of infectious disease.”