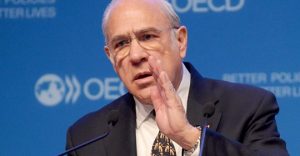 “The OECD has issued a call to arms urging governments to take “bold action” to stop a global slowdown escalating into an economic emergency as it warned the recovery will stall next year.

“The inter-governmental organisation downgraded its 2020 forecast to a post-financial crisis low of 2.9pc, down from 3.5pc predicted a year ago.

“It warned of the rising risk of the economy sliding into a “long-term stagnation”, saying governments “must work together urgently”.

“The trade war, subdued business investment and persistent political uncertainty have weakened global growth and “bold action is needed” to aid the economy, the Organisation for Economic Co-operation and Development said.” 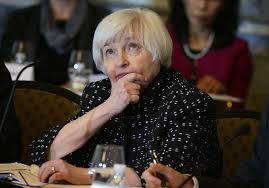 ““I would bet that there would not be a [US] recession in the coming year. But I would have to say that the odds of a recession are higher than normal and at a level that frankly I am not comfortable with,” Yellen said at the World Business Forum.

“With three rate cuts this year, there remains “not as much scope as I would like to see for the Fed to be able to respond to that. So there is good reason to worry.”” 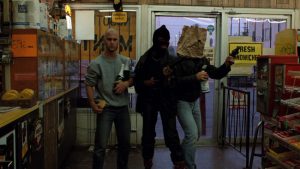 “The Federal Reserve Bank of New York added $103.65 billion in temporary liquidity to the financial system on Thursday.

“The intervention came via overnight repurchase agreements, or repos, that totaled $74.45 billion, and via 14-day repos totaling $29.2 billion. The Fed took all the securities offered to it by eligible banks.” 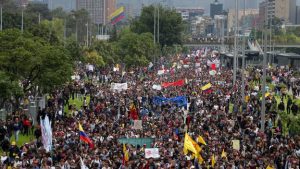 “Hundreds of thousands of Colombians have taken to the streets in a show of support for the country’s embattled peace process with leftist rebels – and to protest against its deeply unpopular government.

“Pensioners, students, teachers and union members joined marches across the country in one of biggest mass demonstrations in recent years.”

“Supporters of ousted Bolivian leader Evo Morales marched into the capital La Paz on Thursday carrying coffins of people killed in clashes with the military and police, drawing attention to the human cost of the crisis gripping the South American nation.” 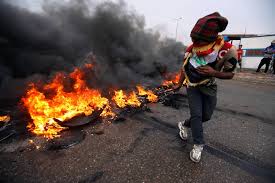 “In unprecedented daily demonstrations, up to 200,000 protesters at a time have called on Iraq’s leadership to hand over power to officials who would end the structural corruption and patronage networks that have whittled away the country’s vast oil wealth.” 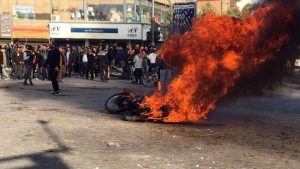 “A spokeswoman for the EU on Thursday expressed condolences to the families of those killed during protests in Iran and called for dialogue to resolve the tensions.

“”We expect Iran’s security forces to exercise maximum restraint in handling the protests and for protesters to demonstrate peacefully. Any violence is unacceptable,” Maja Kocijancic, spokesperson for foreign affairs and security policy, said in a statement.” 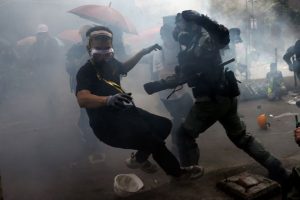 “Clashes broke out between protesters and police supporters on Friday when hundreds descended on Central to rally against the Hong Kong government.

“Demonstrators gathered at about 12.30pm on a bridge outside Exchange Square, which houses Hong Kong’s stock exchange in the city’s financial heartland…” 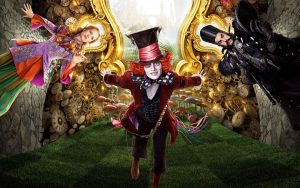 “Record low interest rates are forcing the world’s best pension system to take drastic action aimed at staving off cuts to payouts that were once unthinkable.

“Investors just keep punishing hedge funds. Managers suffered the eighth straight month of client redemptions in October, the longest stretch of withdrawals since the 2008 financial crisis, according to a report from eVestment on Thursday.”

“Ray Dalio doesn’t want to use the word “recession” when talking about the global economy. But he does believe it is headed for what he dubbed the “Great Sag.”

“The billionaire hedge fund founder told CNN Business on Thursday that the world is dealing with financial challenges on a scale not seen since the 1930s, when economies were deep in the throes of the Great Depression. Pension and health care debts are piling up faster than they can be funded, he said…”

“The world is addicted to debt, which has ballooned to unprecedented levels in both developed and developing countries.

“From Argentina to Zimbabwe, soaring debt levels have severely exposed many developing countries to global economic and financial volatility regardless of their income level…

““We are living in fragile times,” Mr. Schlettwein told high-level policymakers and debt managers from over 100 countries.”