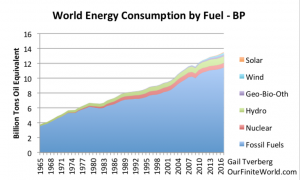 A friend on Facebook asked me a couple of questions: one about why wages have been stagnant for so long and one about the effects of divestment on the global economy. My response offers a brief overview of our energy-constrained economy, which perhaps adds a little to the essay in the ‘About’ section. These are huge issues and my analysis is necessarily a little trite but here it is:

As far as I can see, the global economy has self-organised over 250 years to depend on fossil fuels, as these have been the most convenient and energy-dense fuel sources available to us, and the human collective is always going to want as much comfort, convenience, choice, novelty etc. for as little expenditure as possible.

Oil, gas and coal provide around 85% of our energy needs directly and are intrinsic to the production, maintenance etc of nuclear, hydro and renewables that make up the remaining 15%. 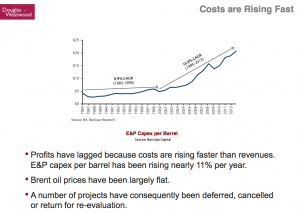 Since around the turn of the century, less and less ‘energy profit’ has been flowing through the system from these fossil fuels. Oil in particular has been growing more and more expensive to extract, and we can see this in the rapid fall-off in capex productivity that the major oil firms have experienced since around 2000, with each barrel of oil getting more and more expensive to produce. [The image to the left is somewhat old now. Brent has fallen substantially since, whilst costs continue to rise].

This is important because the global economy is an energy system upon which we superimpose a monetary system (and then pretend that it is the money that matters). Standard neo-classical economics completely overlooks the centrality of energy in economic growth but it is common sense if you really think about it. In the natural world, an organism needs to earn more calories than it expends in sourcing its food or it will die of starvation. Likewise, no economic activity can take place without energy and no economic exchange is worthwhile unless there is an ‘energy profit’ embedded in it. 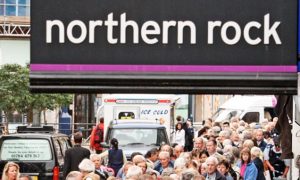 The global economy as whole needs to be growing at a rate of around 3% per annum, and (bar the odd recession) has been doing so since around 1850. If it falls below this level of growth for too long, the financial system is likely be paralysed by loss of faith in fiat currencies and cascading defaults.

Unfortunately we are now deep into an era defined by *energy-constraints*, and indeed by a wide variety of resource-constraints and other growth-limiting factors like pollution and climate change.

“The stagnant wages you mention are a symptom of this insufficient energy-profit. So is the increasing surreality and complexity of our financial system, as it tries to compensate and maintain growth. Zero and negative interest rates are a tacit admission that some economies can no longer offer a return on investment. The political polarisation and geopolitical/trade friction we are seeing are also symptomatic of too many claims on a shrinking/degrading resource-base. 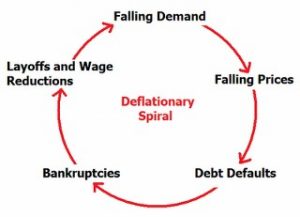 Unfortunately workers with stagnant wages find it hard to afford the goods and services into which energy products (primarily fossil fuels) go. They can add debt or buy things on long-term payment plans but sooner or later they start getting tapped out. I believe we are about at that point now. This in turn weakens demand for energy products and oil, coal and gas prices fall too low for producers. Again we are seeing this now. The danger is that we get sucked into a deflationary death-spiral.

Divestment, well intentioned though it may be, can only exacerbate this problem. Oil companies are already self-liquidating and drowning in debt. Oil producing nations are in varying degrees of pain with Venezuela being in the most notably dire straits – but even Saudi is struggling. I haven’t done any research into the figures so I can’t comment on the extent to which divestment may be harming energy companies and energy producing nations. 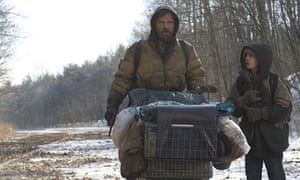 This is not a debate I generally get involved in because there are no good solutions. Fossil fuels are of course quickly rendering the planet non-viable for humans but if we attempt to wean ourselves off them we will ‘starve’ the global economy into a disorderly and extreme contraction, and obliterate the supply-chains that keep most of us fed, watered and warm. What can you do?