“The record books might very well have to be rewritten as farmers in the area of Aroab [of Namibia] measured up to 165 millimetres of rain in the past 24 hours.

“Heavy rains fell over the breadth of southern Namibia and caused the normally semi desert area to turn into one giant water pan with raging rivers.

“Namwater announced that as much as 385 cubic metres of water was flowing into the Naute dam near Keetmanshoop and floodgates might have to be opened within the next 24 hours. Namwater indicated that residents of the area will be updated as time progresses.

“Although not official, the rain measured is extraordinary…” 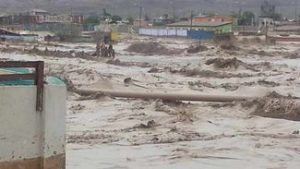 “The world’s driest desert is flooding and some of the planet’s wettest woodlands are burning. Welcome to summer in Chile.

“Rains high up in the Andes mountains have led to torrents of water pouring into the Atacama desert below, sweeping away houses and roads… Flooding caused six deaths and destroyed nearly 100 homes… The disasters are part of a pattern of increasingly extreme weather in the country.” 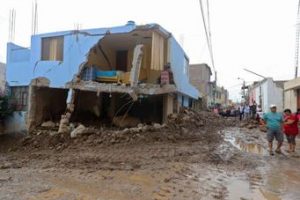 “At least five people were killed and dozens of victims were affected by mudslides in two towns in the Arequipa region of southern Peru, caused by rains in the Andes, officials said Friday. In addition, the Peruvian government on Friday decreed the state of emergency in several municipalities in the southern regions of Moquegua and Tacna (the latter bordering Chile ), due to the “intense rainfall”…” 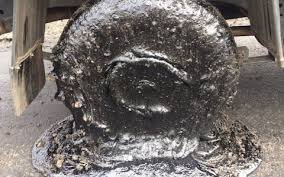 “The northern hemisphere faced a polar vortex, while Australia during December and January was the hottest on record.

“People and the environment are suffering at both ends of the planet because of the extreme events. Australia’s heatwave has exposed cracks in our unsustainable water, land-use and climate policies.” 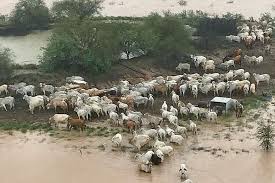 “In north-west Queensland it hadn’t rained, any decent rain, for more than five years. When the downpour finally came last week, graziers were elated.

“Now it’s feared up to 500,000 cattle [that estimate has increased from 300,000 last week], mostly from severely drought-stressed herds, have been killed in widespread flood waters.”

“The average air temperatures across the Bay of Plenty [New Zealand] maintained the record numbers that were racked up last year. This January, Tauranga clocked in at 22.1C, a 2.6C spike from usual. This matched the temperature measured last year and continued the area’s record heat for a second year running.” 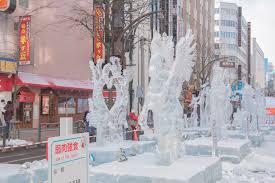 “With Japan’s northernmost main island locked in a deep freeze caused by the coldest air mass ever recorded here, the temperature plunged to a frigid minus 31.8 degrees in Rikubetsu in eastern Hokkaido on Feb. 9…

“Temperatures in Kushiro and nine other sites hit record lows.” 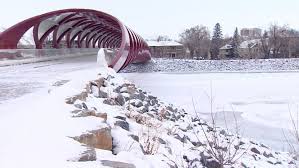 “Temperatures with the wind chill will make it feel like it’s between –40 and –50 in some parts of the province, prompting an extreme cold warning from Environment Canada.

“”Some parts of Alberta should expect extreme cold conditions to occur in the overnight and morning hours through the weekend and even into Wednesday,” the warning reads.” 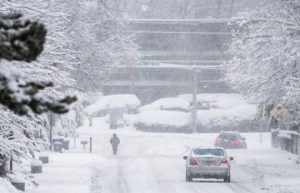 “Some areas around Seattle recieved more than 10 inches of snow Saturday, the most in 70 years, the National Weather Service said, and more is on the way two more storm systems close in on the area… 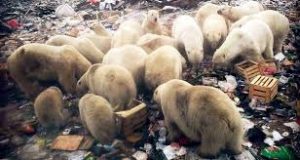 “Authorities in Russia’s remote Arctic archipelago of Novaya Zemlya have taken measures to chase away a band of polar bears that had established a reign of terror over locals in recent days.

“Photos and videos on social media showed polar bears entering apartment blocks and other living quarters and rummaging through garbage in the settlement of 3,000.” 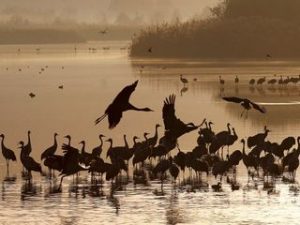 “The number of migratory birds coming in from Siberia [to Pakistan] has declined drastically over the past three decades.

“Around 150,000 birds, including local and migratory waterfowl, were estimated to have landed at 12 aquatic ‘stopovers’, which is 70% less than in 2017-2018, according to a survey conducted during the winter season.” 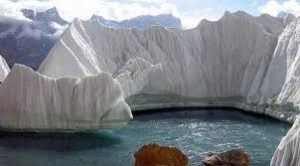 “The continuing Shisper Glacier surge and subsequent creation of a dammed lake has created the fear of another Attabad lake-like disaster in Hunza [Pakistan].

“An assessment report prepared by the Gilgit-Baltistan Disaster Management Authority (GBDMA) has warned that the dammed lake might burst any time and cause immense damage to the local people, critical infrastructure and installations situated downstream.” 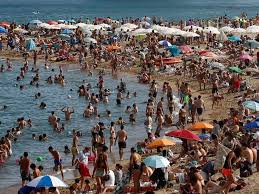 A mini-heatwave hitting parts of Spain with temperatures up to 20c (68f) expected. Recent form would suggest that the Iberian peninsular is in for another blisteringly hot summer.

“Here’s a statistic: On Earth, 18 of the last 19 years have been the warmest in recorded history.

“And as both NASA and the National Oceanic and Atmospheric Administration (NOAA) announced on Wednesday, the last five years have been the five hottest in history — since quality record-keeping began in the 1880s. It’s an unmistakable, accelerating warming trend.

“The globe’s 21st-century heating, however, becomes all the more stark when compared to the coldest years on record. As climate scientist Simon Donner, who researches human-induced climate change at The University of British Columbia, underscored via a list posted on Twitter, the planet’s 20 coldest years all occurred nearly a century ago, between 1884 and 1929.”