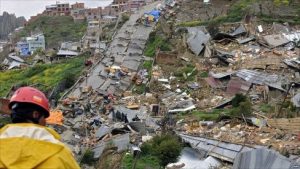 “At least 14 people have been killed and seven others are missing following two landslides in Bolivia, according to the national police chief, Romulo Delgado.

“Torrential rain caused the landslides on the road linking the capital, La Paz, to the northern town of Caranavi, the gateway to the Amazon rainforest, over the weekend.

“The National Hydrological and Meteorological Service issued an orange alert for various departments in the state, warning that this year’s rainy period has begun with unusually heavy precipitation.” 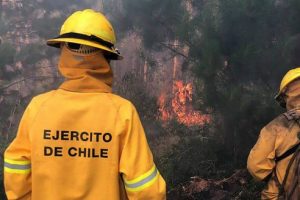 “Three regions in the south [of Chile] are in a state of catastrophe, and reached record high temperatures. While to the north, intense rains in the cordilleran areas that left two dead in a historically dry area: the Atacama desert.

“The Chilean government decreed Tuesday the state of catastrophe in three regions of the south of the country where 630 fires are registered, many of them intentional, while in the north intense mountain rains caused floods and road cuts.” 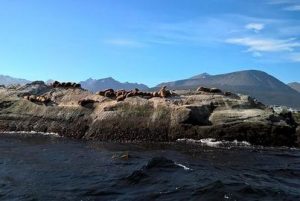 “Unusually warm temperatures in Argentina’s Tierra del Fuego province, an area called the gateway to the Antarctic region, led officials to declare Tuesday a holiday and residents to the shores for recreation.

“The area, which is undergoing summer, reached a temperature of 87 degrees Fahrenheit in Rio Grande Monday, about 1,400 miles south of Buenos Aires.” 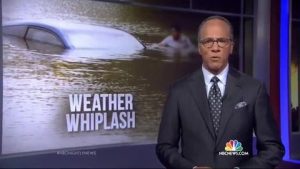 “I have found in going through heaps of data back to 1879 for West Lafayette [Indiana] that when the temperature drops to -15 or less, it tends to stay quite cold for a while…

“The recent Arctic Outbreak was different & broke tradition with what normally occurs with cold of this magnitude… This outbreak was in & out in an unusually rapid fashion… A 73-degree rise from such cold is an extreme rarity.” 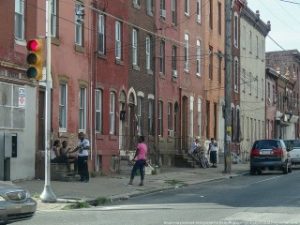 “These Spring-like temperatures came less than a week after temperatures fell into the single digits, and felt like below 0. Trenton crushed their previous record of 64 degrees set in 1890.” 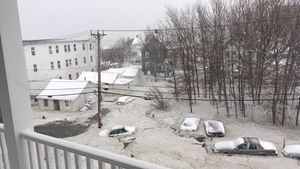 “Let’s hope you had a good umbrella. About 61 inches of rain fell on Massachusetts in 2018, the wettest year on record for the state, with 3 feet falling in the second half of the year. 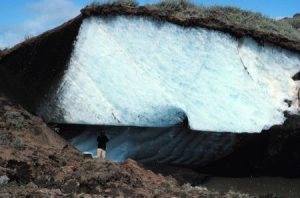 “The remote town of Barrow, Alaska, home to more than 4,000 people, touts picturesque views of the Arctic Ocean as well as an unparalleled connection to the Alaskan wild, but underneath its stunning beauty lies a major global crisis—permafrost coastal erosion—causing Barrow to gradually slip into the sea. 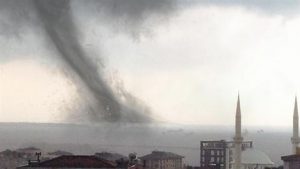 “Schools are off in several districts of the southern province of Antalya [Turkey] on Feb. 6 as experts warned of a “great risk” for deadly tornadoes…

“Three people had died in Antalya two weeks ago and another citizen went missing after storms and tornadoes hit the province, causing more than 100 million Turkish Liras worth of damage.” 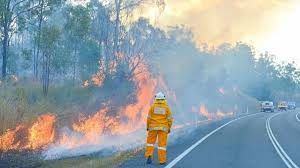 “Townsville is underwater and large parts of Tasmania are on fire. As fires, floods and crazy weather become more frequent and severe, is Australia on its way to being uninsurable?

“Summer in Australia has always been extreme, but some corners of the country are experiencing climate-driven disasters that are worse than ever – and more of them every year.” 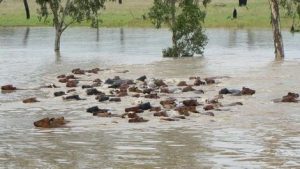 “Australian ranchers who struggled to keep their cattle alive during a prolonged drought last year are now battling to save herds from record-breaking floods inundating the northeast of the country, officials said on Wednesday.

“Australia’s military has been called in to drop fodder to cattle stranded by floodwaters in Queensland state to stop them from starving, Agriculture Minister David Littleproud said, with their owners still marooned in their farmsteads.”

“Victorians are preparing for more than a month’s worth of rain in the span of an hour, but the torrential rain isn’t expected over regional areas where bushfires continue to rage. A severe thunderstorm warning has been issued for the Melbourne and Geelong region…” 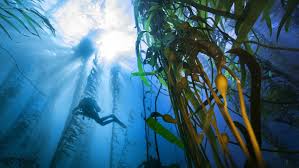 “Giant kelp forests once dominated Tasmania’s east coast, but 95 per cent has been lost over the past few decades…

“In Western Australia, a heatwave between 2010 and 2013 wiped out about 100 kilometres of kelp cover, replacing it with seaweed and other species associated with sub-tropical and tropical areas.” 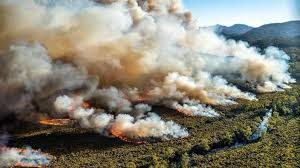 “Growers are battling to keep crops alive on the Waimea Plains as the drought continues to bite in Tasman district, with no sign of a significant break in the prolonged dry spell.

“Irrigators this week saw the amount of water they were allowed to take from catchments on the plains cut by 50 per cent, as the Waimea River dropped to its lowest level for this time of year since the “Big Dry” in 2001.”