“In many ways, the summer of 2018 marked a turning point, when the effects of climate change — perhaps previously on the periphery of public consciousness — suddenly took center stage. Record high temperatures spread all over the Northern Hemisphere. Wildfires raged out of control. And devastating floods were frequent. 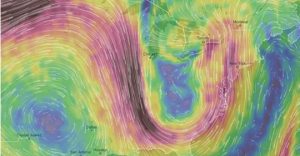 “Michael Mann, climate scientist at Pennsylvania State University, along with colleagues, has published a new study that connects these disruptive weather extremes with a fundamental change in how the jet stream is behaving during the summer…
“In an email, Mann said climate models aren’t fully capturing the phenomenon, and, for this reason, we should expect weather extremes “beyond what is typically projected” into the future…
“Mann said in his blog commentary that he was particularly struck by the jet-stream behavior in the summer. “In summer 2018, I would argue, that signal was no longer subtle,” he said. “It played out in real time on our television screens and newspaper headlines in the form of an unprecedented hemisphere-wide pattern of extreme floods, droughts, heat waves and wildfires.”
“Jennifer Francis, a climate researcher at Rutgers University who has published work exhibiting changing jet-stream behavior because of climate change, found the results of this new study compelling. “This work takes a big step toward understanding the spate of deadly extreme weather events during recent summers — heat waves, floods and droughts,” she said in an email.”
https://www.washingtonpost.com/weather/2018/10/31/study-freak-summer-weather-wild-jet-stream-patterns-are-rise-due-global-warming/?utm_term=.ea1d1abf9b97
Read the previous thread here and visit my Patreon page here.
My apologies for the lack of a  proper thread. Work crisis looms!
https://www.youtube.com/watch?v=pt8VYOfr8To