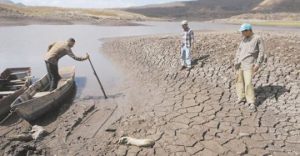 “There’s a 70% chance of a recurrence of the El Niño weather event before the end of this year, according to the World Meteorological Organization.

“This year started with the opposite to El Niño, the so-called La Niña phase. This saw cooler than average sea-surface temperatures in the Pacific.

“That has now faded and, according to the WMO models, there’s a 70% chance of another El Niño developing by the end of this year.

““WMO does not expect the anticipated El Niño to be as powerful as the 2015-2016 event, but it will still have considerable impacts,” said WMO Secretary-General Petteri Taalas.”

“The National Oceanic and Atmospheric Administration issued a report last week confirming that unusually high ocean surface temperatures aren’t confined to the Gulf of Maine. According to NOAA, for several weeks, sea surface temperatures in the western North Atlantic Ocean have been running significantly above normal.” 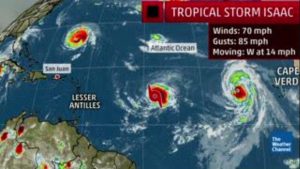 “Hurricane Isaac is currently pushing through the open tropical Atlantic Ocean but could bring heavy rain and damaging winds to parts of the Lesser Antilles later this week.”

“As Paul Flaherty flew over Hurricane Florence, he didn’t like what he was seeing. The storm was getting stronger and stronger. It grew from a tropical storm to a Category 4 hurricane in 72 hours. Flaherty, flight director for the National Oceanic and Atmospheric Administration Hurricane Hunters, saw the eye wall forming. He felt a sick feeling in his gut.”

“Hurricane Helene won’t hit Nova Scotia, but it’ll bring summer-like temperatures to the province. “It’s going to give us an extended period of sunny, warm weather with the humidex going back to 35 by Saturday or Sunday,” said Cindy Day, SaltWire Network’s chief meteorologist, on Monday.”

“This summer’s heat wave in Atlantic Canada was reflected in sea surface temperatures from southern Nova Scotia to northern Newfoundland. In much of the region, ocean temperatures at the surface last month were two to three degrees higher than the 20-year average, according to data from the Department of Fisheries and Oceans.” 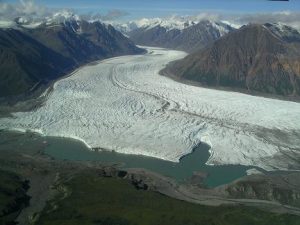 “A heat wave earlier this summer caused some major melting of a glacier in Yukon, and one glaciologist says that could have repercussions for waterways and wildlife… ‘To see this large an area form so quickly — I’ve never seen that before,’ says glaciologist.”

“While this year’s long, hot summer [Utah] has already rung up a price tag in the tens of millions of dollars in drought-related impacts, another winter of light snowfall could take current water concerns and mitigation costs to unprecedented levels in the year ahead.” 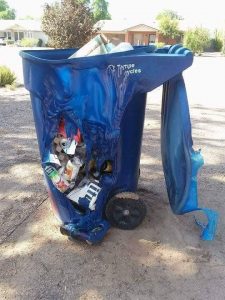 “It’s been warm all across Arizona, on track to be the warmest it’s ever been, according to the National Weather Service in Phoenix… If the trend stays the same and 2018 does indeed become Arizona’s warmest, it will come at a time during what experts have called one of worst droughts in 1,000 years.”

“Unusually high numbers of dead and dying baby seabirds have been washing up on Oregon beaches this summer, alarming some scientists and rescue groups… In California, some scientists are worried they’re seeing a repeat of 2014 and 2015 when the so-called “blob” – a mass of warm water that hung around the Pacific into 2016 – resulted in a mass die-off of common murres, as well as other marine birds and mammals.”

“Hawaii officials urged residents and visitors to be prepared as a strong tropical storm approached the island state. Olivia was a few hundred miles east of Hilo late Monday with maximum sustained winds of 70 mph… “We don’t know what it’s going to look like as Olivia approaches the Hawaiian Islands. So please, folks, don’t let your guard down,” Caldwell said.”

“Typhoon Mangkhut has intensified into a supertyphoon, the US Joint Typhoon Warning Center (JTWC) said Tuesday. It is currently packing 250 kilometers per hour maximum sustained winds and gusts reaching 306 kph, according to one-minute readings made by the U.S. Navy-Air Force command based in Hawaii… The National Disaster Risk Reduction and Management Council on Tuesday morning already raised the highest alert in a 3-step system as Mangkhut continues towards The Philippines.” 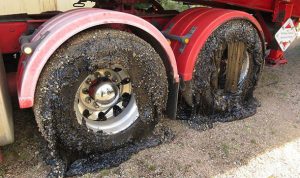 “Over the past three months, the Northern Hemisphere has experienced unprecedented heatwaves, crashing through previous temperature records. During the northern summer, Algeria experienced the hottest day ever recorded in Africa at 51.3°C. Japan had its hottest day on record with 41.1 °C. In the United States, California had its worst wildfires on record after experiencing scorching temperatures of up to 45°C. And in Greece, 98 people died in the deadliest wildfires the world has seen since Black Saturday.

“But as the southern half of the planet heads into our summer, it looks like Australia could follow the trend set by our northern cousins.”

“The broadest take on climate change’s effect on us is that, “in the next 30 years, the western parts of South Africa are expected to be hotter and drier than the rest of the country. More extreme weather, droughts and floods can be expected,” according to the State of Climate Change Science and Technology in SA report.” 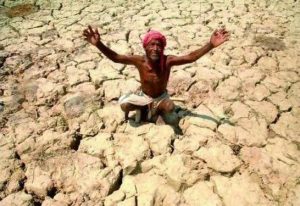 “Agriculture production to see a drastic drop across the state. For the state, it has been a mix of “too much” and “too little”. While the bounteous southwest monsoon triggered devastating floods and landslides in seven districts of coastal Karnataka, at least 15 districts in the state are staring at severe drought situation.”

“A total of 275,000 people have been displaced by drought in western Afghanistan – 52,000 more than the number uprooted by conflict this year – with over two million threatened by the effects of water shortages, the United Nations said.” 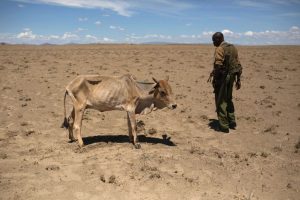 “As droughts worsen across the globe, more people who earn their living through farming and owning livestock are forced to leave their homes… More Kenyans were affected by drought and violence than Linke had thought. Approximately 15 percent of respondents reported having to relocate due to drought. Twenty-one percent reported being violently attacked outside of their homes, and a large share of the victims were migrants; 43 percent of people who reported relocating were victims of violence, compared to nearly 12 percent of the general population.”

“Over the past four years, Cuba has faced the most extensive drought seen in 115 years, affecting 80 percent of the country. Prolonged rationing in the residential sector, with the suspension of water supply for up to a month, caused serious social upheaval, while economic losses amounted to 1.5 billion dollars, according to official figures.” 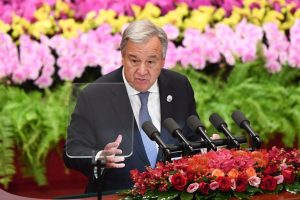 “Warning of the risks of “runaway” global warming, the United Nations secretary general, António Guterres, on Monday called on global leaders to rein in climate change faster. “If we do not change course by 2020, we risk missing the point where we can avoid runaway climate change,” Mr. Guterres said at United Nations headquarters in New York.”