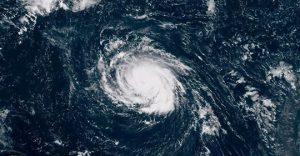 We have hurricanes in The Atlantic and typhoons in The Pacific thanks to warmer waters in both – a most unusual situation:

“As forecasters predicted an increased likelihood that Tropical Storm Florence could strengthen and strike somewhere along the East Coast, some experts said it was another symptom of a historic and unique hurricane season that could be influenced by global warming.

“With the Eastern Seaboard on alert, storms in the northeast Pacific Ocean have generated the most “accumulated cyclone energy” on record through the first week September, said Phil Klotzbach, an atmospheric science researcher at Colorado State University.

“Usually when the Pacific is alive with storm energy the Atlantic Ocean is not. The synergistic high and low activity modes are well known to scientists, and this was supposed to be the Pacific’s year to make waves.

“And then Florence came along.

““The thing that’s interesting now is the Pacific is still active, but the Atlantic is very active, which isn’t normal,” Klotzbach said. “I’m surprised to see the Pacific and Atlantic active at the same time.”

“”…experts say there are correlations between what’s happening in the seas off the United States and what global warming has been doing for years — heating up the waters.””

“Tropical Storm Helene strengthened into a Hurricane Sunday afternoon. At 5 p.m. Helene was located about 145 miles to the southwest of the southernmost Cabo Verde Islands. Helene is moving toward the west near 13 mph, and a turn toward the west-northwest is expected on Monday, with a continued west-northwestward motion through Tuesday.”

“As the southeast part of the United States continues to watch what will happen with Hurricane Florence, the National Hurricane Center has now said Isaac has intensified into a Category 1 Hurricane late Sunday, the fifth hurricane of the 2018 season.”

“Hurricane Florence is still on track to hit the East Coast of the United States this week… Florence, which was upgraded from a tropical storm to a hurricane on Sunday, was in the Atlantic Ocean, about 1,400 miles from East Coast. It was moving west close to 7 mph, about 720 miles from Bermuda, the National Hurricane Center said.”

“Three people, including a young mother and her toddler, drowned on Saturday when their cars were swept away as flash flooding hit Fort Worth, Texas.” “The floodwaters were really high for a long period of time, which made access hard to get to people and unfortunately it’s been a very sad day for Fort Worth and for its residents,” McAmis said.”

“A roaring wildfire that shut down a stretch of a major interstate near the California-Oregon border exploded in size as crews on Saturday scrambled to prevent flames from reaching rural communities. The blaze in California’s Shasta-Trinity National Forest was burning out of control after chewing through 150 square kilometers of timber and brush since Wednesday.” 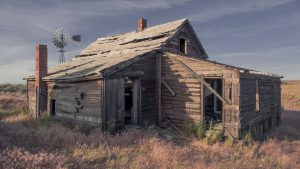 “Close to 13,000 square kilometres of land were scorched, blistered, and branded in British Columbia in 2018, and this year has set a new record for the largest area burned by fire in a season. Even in Ontario, over 1,200 fires have broken out as of August 30, double the 10-year average for the province. The number of fires and the damage that they inflict can vary over different seasons. But recent trends point to a worrisome pattern.” 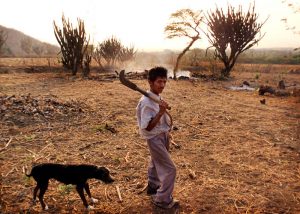 “Poor harvests caused by drought in parts of Central America could leave more than two million people hungry, the World Food Programme said on Friday, warning climate change was creating drier conditions in the region. Lower than average rainfall in June and July has led to major crop losses for small-scale maize and bean farmers in Central America’s “Dry Corridor”, which runs through Guatemala, El Salvador, Honduras and Nicaragua.”

“ENSO-neutral conditions persisted in the tropical Pacific during August 2018. Atmospheric indicators became aligned with oceanic indicators during August, for a climate system that is gradually moving in the direction of El Niño. This is consistent with the consensus from international models, which forecast a transition toward El Niño over the next three-month period (62% chance over September – November 2018). The probability for El Niño conditions being established reaches a peak during early 2019, with a 78% chance for El Niño conditions over March – May 2019.” 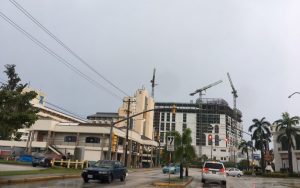 “Typhoon shelters in the Northern Marianas are filling up as people prepare for Typhoon Mangkhut. The typhoon is expected to pass between the island of Rota and Guam as a category three storm about 4pm local time. Our correspondent on Saipan Mark Rabago said businesses and schools were closed and people have been lining up for supplies. He said everyone, including the government, has learnt the lessons from Typhoon Soudelor which caused severe damage three years ago.”

“A slowly organizing tropical low near southern Taiwan will threaten the country with flooding downpours in advance of potential impacts from Mangkhut… This low, along with the Mei-yu front, has already produced heavy rain across northern Taiwan on Saturday when in excess of 300 mm (12 inches) of rain fell across portions of New Taipei and Taipei Cities. The deluge continued on Sunday as additional rain fell across the area. A two-day rainfall total in Shilin District, along the northern coast of Taiwan, reached nearly 500 mm (20 inches).” 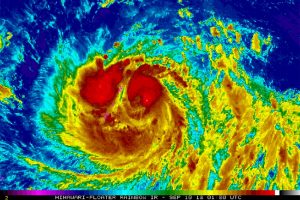 A weather system being monitored in the Pacific Ocean can develop into a “supertyphoon” while inside the Philippine area of responsibility, the state weather bureau said Monday. Typhoon Mangkhut is packing 140 kph maximum sustained winds and gusts of up to 170 kph and can enter PAR by Wednesday… Mangkhut, which will be named “Ompong” once inside PAR, will come in packing sustained winds of 215 kph but can develop into a supertyphoon within the next 12 to 24 hours.”

“… this year is the worst we have ever seen. There are parts of Australia where it’s unheard of not to grow a winter crop. These are the key supply areas that Australian agribusiness relies on for feed grain year in year out. But this year, the headers will remain in the sheds — as the few crops which made it out of the ground simply sizzle on the stalk — astonishing plant physiologists and devastating farmers.” 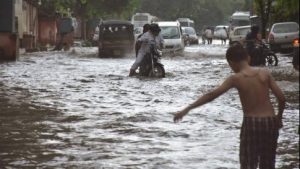 “Torrential rainfall in Rajasthan’s Kota division since late Friday evening wreaked havoc, with thousands being shifted to camps by the administration in Baran and Kota districts of the state. Three more persons died in separate rain-related mishaps, taking the toll to six in Kota division.”

“Some residents of Ibeju Lekki in Lagos [Nigeria] on Saturday lamented their loss of valuables worth millions of Naira to flood from persistent rainfall since the early hours, coupled with the poor drainage facilities in the community.” 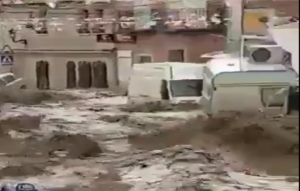 “Frightening flash flooding hit a village in Spain at the weekend, sweeping away car in the street, as a major storm hit the area. The carnage that ensued was captured on camera by locals of the village of Cebolla in Toledo. Saturday saw the nearby Sangüesa creek burst its banks causing a flash-flood to pour through the streets wreaking havoc on the village’s annual fiesta.”