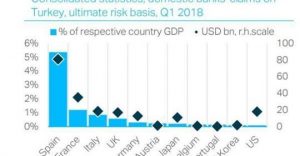 “Spanish – and to a lesser extent French and Italian – banks have lent a lot of money to Turkey. So as that country spins closer to default, those banks and their governments are in danger of having massive holes punched in their financial structures.

“With Greece its usual mess and Italy’s bond yields spiking, the last thing Europe needs is a banking crisis…

“Next up apparently, will be an emerging market bailout in the form of a Europe-wide set of loan guarantees (managed and backstopped by Germany)… This might work if the guarantee is big enough relative to the debts coming due. But in effect, the result is the swapping of Spanish loans to Turkey for German loans. And there’s a limit to how much of the world’s debts even Germany can take on.

“Turkey, meanwhile, is just the beginning. Tunisia is teetering, Brazil’s currency is falling, and a big chunk of the Middle East has external debt but little in the way of resources to cover it.

“By the time this latest emerging market bailout is complete, the amount of debt added to developed world balance sheets could be enough to spread the pain pretty widely.” 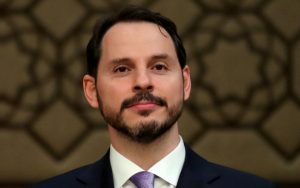 “Turkey’s ailing economy has most likely plunged into a recession over the last month thanks to the rising crisis with the nation’s currency, and a fragile banking sector, according to new research from Capital Economics… A falling currency tends to mean rising inflation as the cost of imports increase, and that is just what has happened in Turkey. Even prior to the lira’s second collapse after US sanctions, inflation had already hit a 15-year high in July — close to 16%.”

“Turkey’s economy faces fresh challenges after 20 of its leading banks were downgraded and faith in the authorities’ ability to support the lira plummeted. Ankara’s central bank effectively tightened monetary policy by changing banks’ borrowing limits for overnight transactions on Wednesday… But the moves have failed to boost investor confidence, with the central bank having lost credibility by not raising interest rates amid rapid inflation.”

“In a little over two months, painful U.S. sanctions on Iran’s oil sector will take effect, but the Iranian economy is already showing signs of strain. Iran’s currency, the rial, has fallen by more than half since the start of the year. There is now a thriving black market for U.S. dollars as the rial continues to plunge. The turmoil has the government engaging in a bit of a circling firing squad. In July, the head of the central bank was sacked. In early August, the labor minister was ousted and just this past weekend the economy minister was removed.” 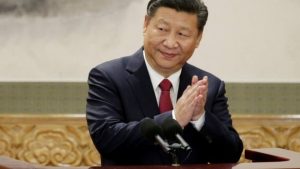 “The prospect of a slowdown was apparently too much for President Xi to bear. So, he ordered the authorities to loosen up on the monetary squeeze. The pretense for this change was the U.S.-China trade war. But in reality, President Xi’s change of heart has more to do with the dramatic surge in bankruptcies and sharp reduction in infrastructure investment, which has fueled much of China’s growth.

“We will have to wait and see whether President Xi’s gamble will pay off, or whether it’s too little, too late. At this point, the only thing we know is that exchange-rate flexibility has spawned imbalances and instability, Xi’s nightmare. And, this is bad news not only for China, the world’s locomotive, but for the international markets, too.”

“With a debt mountain of 12.17 trillion baht ($372 billion) at the end of March, the equivalent of 77.6 percent of gross domestic product, Thai households are among the biggest borrowers in Asia and they are finding it increasingly difficult to keep up with payments. In addition, their debt pain could increase because the Thai central bank has signalled it is likely to follow other central banks around the world and raise interest rates from near record lows.”

“The slide in business confidence [in New Zealand] shows no sign of slowing, with the headline measure falling to its lowest in more than 10 years. ANZ Bank’s monthly survey shows sentiment turned more gloomy with a net 50 percent of firms expecting the economy will deteriorate over the next year, down five percentage points from July. It’s the lowest level since April 2008 when the global financial crisis was breaking.” 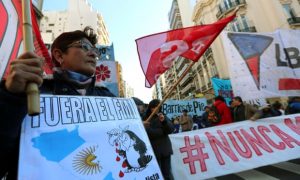 “Argentina’s President Mauricio Macri has asked the International Monetary Fund for an early release of funds from a $50bn deal to ease concerns that the country will not be able to meet its debt obligations for 2019. Macri said in a televised address that Argentina had agreed with the IMF “to advance all necessary funds to guarantee compliance with next year’s financial programme”.”

“Argentina’s peso fell to a record low against the dollar Wednesday after President Mauricio Macri said that he has asked the International Monetary Fund to speed up delivery of a $50 billion bailout package.” 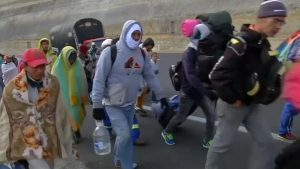 “Venezuelan immigrants were attacked earlier this month by residents at the border state of Roraima [Brazil], where they were forced out of their camps… This is only the latest development in what is shaping up to be a regional crisis, as neighboring countries respond to Venezuela’s deepening economic and political upheaval.”

“The Swedish krona fell for a fifth day against the euro on Wednesday, after hitting its weakest level in more than nine years. The decline followed weak retail sales data earlier in the week and brings the Swedish currency’s losses this year to more than 8 percent against the euro.” 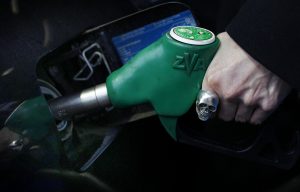 “British shop prices rose for the first time in more than five years this month, as the British Retail Consortium warned that customers will face more severe price hikes if no Brexit deal is reached.”

“German consumers expect to have less money left in their pockets later this year despite wage increases in many sectors. “Higher energy prices that have driven inflation up to 2 percent may be drowning out the excellent conditions in the labor market and solid wage hikes,” GfK suggested. “People have realized that they don’t get any decent yields on their savings in this low-interest environment,” GfK economist Rolf Bürkl argued. “Plus they are seeing their money lose purchasing power as consumer prices go up by 2 percent.””

“Including the Bank of Italy’s Target 2 liabilities would take the country’s public-debt-to-GDP ratio to around 160 percent, or to the highest in the last 100 years… it is all too likely that Italy’s troubled banking system will at some stage need a government bailout. [A] sovereign debt crisis… would certainly not be good for the global economy since Italy’s economy is around 10 times the size of that of Greece and after the United States and Japan it is the world’s third-largest sovereign debt market.” 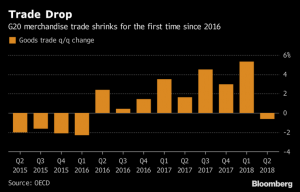 “A top banking CEO from Europe warned that his clients are starting to feel the impact from global trade tariffs, with production lines being changed and profit warnings being issued… “It is very clear that a trade war is not good for producer confidence to invest and for consumer confidence to consume. It already has (had) a negative impact on economic growth.””

“International trade in merchandise by the world’s biggest economies contracted for the first time since 2016 against a backdrop of a stronger dollar and rising protectionism… The biggest drop in exports was recorded in Argentina with 19.9 percent, followed by Brazil and the U.K. Imports contracted most in Turkey.”

“While the ever-climbing U.S. stock market (and the bubble forming in it) has been stealing most of the investing public’s attention, a dangerous bubble has been forming under-the-radar in the corporate bond market. Interestingly, this corporate bond bubble is one of the main reasons why the stock market has been consistently pushing to new highs, and it will also eventually prove to be its undoing… To put it simply, the root cause of the U.S. corporate bond and stock market bubble is ultra-low interest rates.” 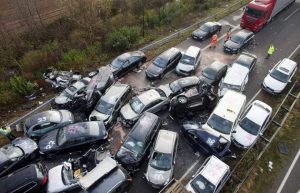