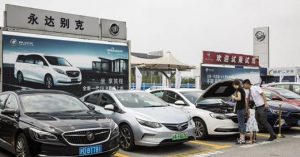 “After nearly a decade of growth, new-vehicle sales in the world’s largest auto markets are entering their first sustained slowdown since the global financial crisis, putting pressure on profits as uncertainty around the U.S.’s trade policies looms.”

“A week ago, Trump said he was “not thrilled” by the Fed’s monetary tightening… Powell defended the need to raise rates, having declared that key indicators such as household and business spending, and employment and inflation rates all pointed to robust and sustainable growth without overheating. He reaffirmed a policy of gradual tightening. His appears to be the consensus view among fellow central bankers.” 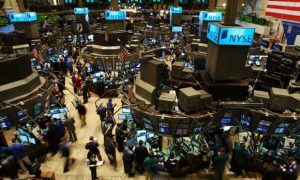 “Given massive global corporate debt and a soaring US stock market – the cyclically adjusted price-to-earnings ratio is high by historical standards – one possible trigger for a downturn in the coming years is a negative shock that could send securities tumbling… the US [is] in a weak position to manage the next inevitable shock.”

“…there’s a hidden danger lurking within economic data that suggests trouble could be looming; Americans aren’t saving for the future. Again.” 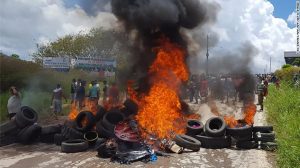 “Brazil is sending troops to its northern border to “guarantee law and order” amid an ongoing crisis which is seeing thousands of Venezuelans attempting to cross into neighboring countries and beyond. Brazilian President Michel Temer signed a decree Tuesday to deploy the armed forces to the state of Roraima, making the announcement during a speech from Planalto Presidential Palace.”

“Economists had long argued that Argentina’s peso currency was overvalued, and the government acknowledged that it would depreciate gradually over the years. But no one expected the speed with which the peso plunged against the dollar in April, due to investor concerns about the government’s ability to control inflation and interest rate hikes by the U.S. Federal Reserve, which strengthened the dollar worldwide.” 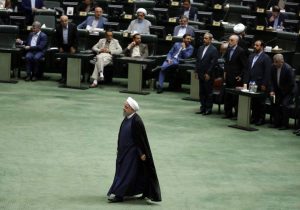 “Iran’s President Hassan Rouhani has vowed to fight crippling US sanctions on the country while defending his cabinet’s performance after he was summoned by the Iranian parliament for the first time to explain the country’s worsening economic crisis… However, MPs were unconvinced with his answers and have referred the case to the judiciary, according to local news agencies.”

“Turkey’s currency crisis, spurred on by economic mismanagement and U.S. sanctions, may pose a significant risk to European financial institutions due to their credit lines to Turkish companies. The embattled lira, which continued to slide this week, is leaving European firms exposed to the turmoil in Turkey to the tune of tens of billions of dollars, both via their ownership of its financial institutions and the money they have lent to its once vibrant private sector.”

“The German government is considering providing emergency financial assistance to Turkey as concerns grow in Berlin that a full-blown economic crisis could destabilize the region, German and European officials said… Berlin fears a meltdown of the Turkish economy could spill over into Europe, cause further unrest in the Middle East and trigger a new wave of immigration toward the north.” 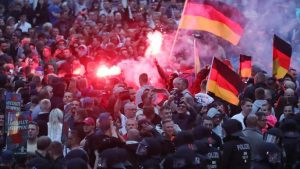 That would be popular with this lot:

“Germany was shaken by the worst far-right rioting since 1992 when police with water cannon failed to stop thousands of neo-Nazis and other extremists chasing immigrants, hurling bottles and fireworks, giving Hitler salutes and chanting “foreigners out”.”

“Italy’s benchmark borrowing costs hit a four-and-a-half year high Tuesday as investors continued to trim government bond holdings amid concern that the country’s populist administration is on a collision course with EU officials in Brussels that echoes the worst of the region’s 2012 debt crisis.” 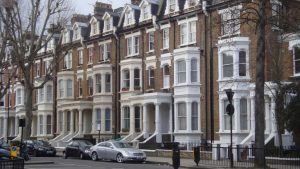 “House prices in London’s overvalued market will fall this year and next, a Reuters poll of analysts and experts predicted, and will tumble if Britain fails to reach a deal ahead of its departure from the European Union… “Central London is tanking because the traditional international buyers are staying away – and the quantum of buyers is falling. A disorderly Brexit will exacerbate this trend,” said Tony Williams at property consultancy Building Value.”

“Central banks and sovereign wealth funds are likely to sell up to £100bn of UK bonds and precipitate a balance of payments crisis if Brexit talks break down in acrimony, Bank of America has warned clients. The US bank said selling on this scale would send sterling cascading down to lows not seen since the mid-1980s, with a risk of cliff-edge falls if the exchange rate breaks below $1.10 against the dollar.”