Economy 27 Aug 2018 a perfect storm for the global economy 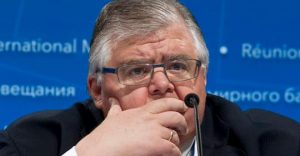 “Speaking at the Jackson Hole meeting of central bankers in Wyoming at the weekend Carstens, the BIS general manager, provided a detailed road map of how protectionism could set of a ‘’succession of negative consequences’’ that endangered decades of global economic gains…

“Reversing globalisation, he said, could lead to higher prices, increased unemployment and lower growth while risking unravelling the financial inter-dependencies that enabled and encouraged trade and investment links.

“In turn that could unsettle financial markets and decrease capital spending and the interaction between the real and financial risks could amplify each other, creating that ‘’perfect storm.’’

“…The complexity of the trade issues is underscored by the development of global supply chains.

“Trump has said that trade wars are good and easy to win. The Carstens analysis underscores the reality that, despite the imperfections of the globalised system of trade and finance, no-one is likely to win from protectionism, not even the US. Indeed, everyone – including the US – is more likely to be a loser.”

“Besieged by increasing legal concerns, U.S. President Donald Trump is thought to be looking to shore up his political position ahead of the midterm elections in November. One way to do so could be to distract voters from the problems at home by shifting the focus to the ongoing trade war with China, analysts said. In other words, the U.S. may be on the verge of escalating the conflict between the world’s two largest economies.” 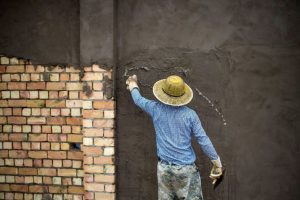 “U.S. officials seem to think they have the upper hand in trade talks with China because its economy is struggling. Judging by the string of measures they’ve recently announced to shore up growth, Chinese officials may privately agree… China’s growth woes are homegrown, not the result of U.S. tariffs. Two factors are largely to blame: the government’s concerted effort over the last five quarters to tighten credit and stabilize China’s debt levels, and, relatedly, a dramatic dropoff in investment spending by local governments.” 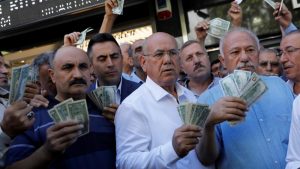 “…significant damage has already been done to the Turkish economy. The lira is now down 40 percent to the US dollar this year, raising widespread concerns over the sustainability of the country’s sizeable dollar-denominated debts… Turkey’s problems are far from idiosyncratic. Coming on the heels of recent interventions of the International Monetary Fund (IMF) in Argentina and Pakistan, they clearly reflect a set of deeper vulnerabilities in the emerging-market asset class as a whole.” 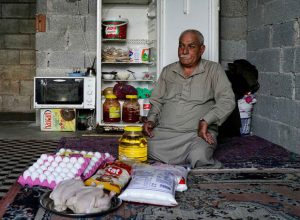 “The lira crisis has raised prices, heightened uncertainty and sent a chill through much of Turkish society, including Syrian refugees, who are some of the country’s most vulnerable communities. Around three million Syrian refugees live across Turkey after fleeing their country’s seven-year war… Many survive off informal work and as a result live hand to mouth without any social security system to protect them.”

“Iran’s parliament has voted to remove the economy minister from office as the country battles an economic crisis. Masoud Karbasian was targeted by a no-confidence vote over problems in the banking system, tax regulation and his failure to fix the economy.” 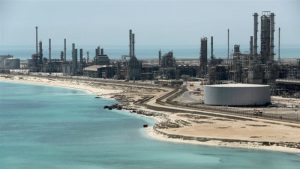 “The International Monetary Fund (IMF) has warned Saudi Arabia against increasing public spending as oil prices rise… Around half of state spending goes on the public sector wage bill, according to the IMF which suggested “the workforce could be gradually reduced through natural attrition”. Unemployment among Saudi citizens is at 12.8 percent, and sits at 31 percent among women. The country’s key challenge is to create around 500,000 jobs for its citizens over the next five years, the IMF said while stressing the need for more posts within the private sector.”

“Nigeria is just a few steps removed from total breakdown of law and order.” 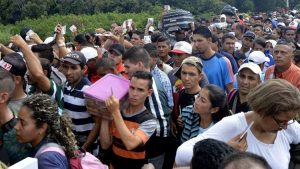 “The exodus of migrants from Venezuela is building towards a “crisis moment” comparable to the European refugee crisis of 2015, the UN has warned. Thousands of people flee the country every day, travelling by bus or sometimes by foot along migration routes across South America. They flee an economic collapse that has left food and basic medicine scarce while armed gangs rob and kill without consequence.” 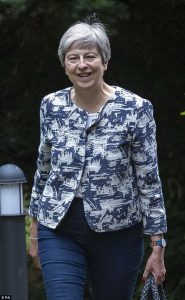 “Theresa May has called for a crisis summit in order to prepare for a ‘no deal’ situation, amid fears the row between Brexiteers and Remainers is undermining negotiations with Brussels. The prime minister told cabinet ministers on Friday morning to be prepared to meet on September 13 to work out a plan for critical areas not yet covered by disaster plans.”

“British consumers are facing a hike in food prices of at least 5% as a result of extreme weather this year, economists warn.”