“Hawaii is on high alert as Hurricane Lane has strengthened to a maximum Category 5 cyclone and is forecast to bear down on the islands bringing storm-force winds, heavy rain and dangerous waves.

“Residents have been stockpiling food and water, and schools and public sector jobs have been suspended.

“Official warnings have been issued for Hawaii and Maui counties, in the eastern part of the islands, where the first dangerous gusts could hit on Thursday.”

“Typhoons are forming at an extraordinarily fast pace this year apparently due to higher temperatures on the surface of the sea where they are formed as well as irregular seasonal winds, say experts.”

“A hot spell returned to Japan on Aug. 22 with the mercury hitting at least 35 degrees Celsius at 235 observation points across the nation, and the hottest temperature of the day was 39.7 degrees recorded in Sakai Ward.”

“At least 31 people have been killed and another 14 have been reported missing after Typhoon Rumbia devastated east and central China. Typhoon Rumbia, the 18th typhoon to hit the country this year, continues to move inland in a north-west direction after wreaking havoc in eight provinces and cities. A total of nearly 15 million people have been affected so far.”

“Flooding caused by recent storms in Laos has killed at least 46 people while 97 others are missing and four people were injured, according to the latest report from the National Disaster Prevention and Control Committee.”

“Some 82,460 families of 236,188 people in 79 districts of 14 provinces, out of the country’s 18 provinces, were affected by floods after tropical storms Son-Tinh and Bebinca brought torrential rain from the middle of July to the middle of August, local daily Vientiane Times reported on Wednesday.”

“Nearly 400 people have died and thousands remained stranded by the worst flooding in the Indian state of Kerala in a century. More than one million people have been displaced, many of them taking shelter in thousands of relief camps across the state.”

“Australia’s evaporation levels are running at record rates, especially across eastern states, increasing the misery for drought-hit farmers and raising bushfire risks as the mercury starts to climb. While rainfall deficiencies have drawn much attention, stronger-than-usual winds, abnormally sunny days and low humidity have combined to push up evaporation levels, Bureau of Meteorology data shows.”

“Thousands of Muslims gathered together on Tuesday to show solidarity with drought-ravaged farmers as they celebrate Eid Al Adha. More than 30,000 people attended Lakemba Mosque in Sydney, to conduct a special ‘rain prayer’ during the annual Eid celebration.”

“San Diego’s average temperature of 76.8 degrees from July 1 to Aug. 20 is the hottest on record for that 51-day period, the National Oceanic and Atmospheric Administration announced Tuesday. The previous record was 76.6 degrees set in 1984.”

“Twin fires burning on both sides of Clear Lake in Mendocino, Lake and Colusa counties have devoured more than 400,000 acres, scorching an area more than half the size of Rhode Island.”

“As high pressure moves directly over the Lone Star State [Texas], this heat wave gets even more intense and high temperatures climb closer to record territory.” 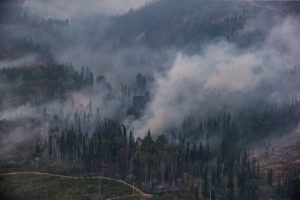 “British Columbia had more fires burning on Tuesday than at any point last year, and the wildfire season still has months to go. Last year was a record year for acres burned across the province, and so far this year is already its third-worst on record.”

“The summer of 2018 has been noteworthy for the all-time heat records smashed around the world, from California to Sweden and Japan… The heat is a sign of a warming world, scientists have said, with human-caused global warming raising the odds of heat waves as well as increasing their severity and duration.”

“Maersk Line, the world’s largest container shipping company, is about to launch the first ever container ship on an Arctic route along Russia’s north coast, as melting sea ice promises to offer a possible future alternative to the Suez Canal.”

“The last time Swiss glaciers managed to grow was in 2001, according to the federal technology institute ETH Zurich. “Since then, the country’s 1,500 glaciers – as well as others elsewhere – have been suffering a slow but inexorable death,” it said on Monday.”

“Losses for already hard-pressed Danish farmers are likely to be bigger than previously expected, an industry lobby group said on Wednesday, warning this could trigger more bankruptcies.”

“The German Agriculture Minister Yulia Klöckner will announce today if farmers will receive compensation over losses due to extreme weather. Drought-hit German farmers are waiting to hear if they will receive the one billion Euro package called for by the German Farmers Association.”

“More than 90 percent of the area of the Czech Republic has been affected by drought, according to a report carried out by a scientific team within a project called InterSucho. Over 72,000 square kilometres are currently affected by the drown-out period of dry weather and lack of rainfall.”

“A scorching hot, dry summer has ended five years of plenty in many wheat producing countries and drawn down the reserves of major exporters to their lowest level since 2007/08, when low grain stocks contributed to food riots across Africa and Asia.”