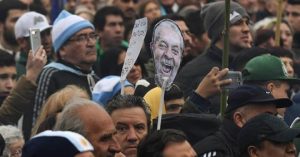 “The amount of debt in the world increased by nearly $25tn in the year to the end of March, piling more pressure on a global financial system already struggling to deal with rising US interest rates, widening spreads for borrowers and a strengthening US dollar…

“Relative to gross domestic product, global debt exceeded 318 per cent in the first quarter, the first such increase since the third quarter of 2016, according to the IIF.

““The increase in the level of debt, both in absolute terms and relative to GDP, against a backdrop of tightening financial conditions, is, of course, a cause for concern,” said Hung Tran, the IIF’s executive managing director.

“Such concerns are likely to play out in emerging markets over the coming months. Currencies and bonds in countries such as Argentina, Turkey, Brazil and South Africa have been dropped by investors as tightening conditions expose the vulnerability of countries with high inflation and large current account and budget deficits.”

“In a global economy increasingly plagued by worries — from an unfolding trade war to higher oil prices — Turkey may present the most immediate cause for alarm… In a conspicuous sign of unease among global investors, the value of Turkey’s currency, the lira, has plunged by roughly one-fifth this year, raising prices for households and businesses alike. It dropped some more on Monday, as Mr. Erdogan handed the job of economic chief to his son-in-law…”

“Seven months after the largest protests in Iran’s history, Iranians have hit the streets once again. They are fed up with the country’s poor financial performance and the recent devaluation of Iranian rial. Having become one of the world’s most volatile currencies, the rial over the past few months has lost more than 50 percent of its value.”

“China is selling “vapor projects” to other nations and booking profits for simply making a commitment – a shell game with billions, possibly trillions, at risk. At the end of the day, China shows multiple massive infrastructure projects and this boosts their GDP, employment, and manufacturing data while covering the raw material and labor costs by sucking real revenues from host nations. As long as the host nation does not lose faith in the deal or ask too many questions, no one is the wiser and China can keep playing their shell game. We believe all of this started to change in early 2018…”

“South Korea’s job market showed little sign of improvement with year-on-year job addition hovering below 200,000 for the fifth month in a row in June – the longest job stagnation since the 2008 global financial crisis – as manufacturing sector continued to shed jobs amid increasing wages and shorter work hours.”

“Up to 1 million Australian households could be in danger of missing mortgage repayments by September. That is the warning from one independent analyst if the big four banks do what many fear they will do and increase their standard variable rates rise by as little as 0.15 percentage points over the next few months.”

“The gulf between the easy, prosperous, productive Brexit that its voters are impatiently expecting, and the grim, complicated cost of disentangling economies that have been intertwined for decades has poisoned and paralyzed British politics.”

“Eurozone house prices rose at the fastest pace in 11 years during the first three months of 2018, a development that is likely to reinforce the European Central Bank’s determination to end a key stimulus program in December. House prices in the first quarter were 4.5% higher than in the same quarter a year earlier, the European Union’s statistics agency said Tuesday. That was the largest on-the-year increase since the first three months of 2007, well before the onset of the global financial crisis, when asset prices tumbled as the financial system seized up.”

“Bank of Italy Governor Ignazio Visco told a gathering of bankers in Rome that Italy’s reform effort had petered out and that, if a new financial crisis should hit, it was now “much more vulnerable than we were 10 years ago”.”

“The U.S. Treasury Department on Tuesday sold $33 billion of three-year government notes to the weakest demand in more than nine years at a yield of 2.685 percent, which was the highest yield since May 2007, Treasury data showed.”

“A U.S.-China trade war and a further 10 percent drop in emerging-market stocks might not be the worst things to happen this year, according to Mark Mobius. The veteran investor in developing nations also sees a worldwide financial crisis on the horizon.”

“Global financial assets have soared in value by nearly 50 per cent from their level just before the global financial crisis, despite very sluggish growth in global GDP and trade since that time. This represents a huge surge in paper (rather than real) wealth and most of the value is concentrated in stocks (US$70 trillion) and in sovereign and corporate bonds (US$90 trillion). These “stretched” valuations, to use a term employed by the International Monetary Fund, among others, were vulnerable to a correction even before Trump embarked upon his reckless trade wars.”

“European stock markets are not a pretty picture this morning, as trade war worries hit stocks.”