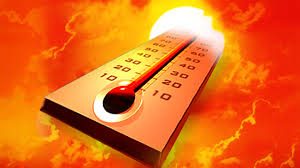 “Globally, this June marks the second warmest on record and this year to date the hottest La Nina year on record, which has been featured by high impacting extreme weather during the early summer in the northern hemisphere, the World Meteorological Organization (WMO)said on Tuesday.

“Temperatures were not only exceptionally high over large parts of northern Siberia in June, but also well above average over much of the United States, central Canada and North Africa, and over the Middle East.

“…As a result, episodes of extreme heat and precipitation are increasing around the globe. For example, Japan has suffered the worst flooding and landslide in decades, with many daily rainfall records broken.”

“Even though some welcome rain fell in and around the Oslo area on Monday, it wasn’t nearly enough to end a drought that’s now raising more alarm over large parts of [Norway]. Agriculture Minister John Georg Dale rolled out some emergency measures just before the weekend for farmers demanding state assistance.”

“Conditions are dryer than the fabled summer of 1976 and it’s putting UK farms at high risk of devastating fires.”

“In Slovakia, we are encounter ever more and more frequently also encountering extreme weather phenomena like long periods without precipitation with high temperatures, and – quite the opposite – strong storms or torrential rains.”

“Authorities say four people have died after the cart they were traveling in overturned in a swollen river in eastern Romania… The deaths come after days of heavy rain and flooding in parts of Romania.”

“Heavy rains engulf TransBaikal region with a dozen railway bridges destroyed and 15 more damaged. Thousands of people in Chita were evacuated after their homes were submerged in the worst flooding in modern memory. Some were forced to take refuge of roofs from the rising water.”

“Potentially deadly temperatures in Egypt have zookeepers pulling out lots of cold treats to keep animals safe and happy this summer.”

“In the 24 hours to 8am Tuesday, 77 rain-monitoring stations in 13 counties received precipitation of over 100 mm. The heavy rains caused water levels in several rivers to rise above warning levels and also triggered flash floods and landslides that blocked many roads in the city of Mianyang and Aba Tibetan and Qiang Autonomous Prefecture. The Mount Emei scenic area has been partially closed to the visitors as of Tuesday as torrential rain is forecast to continue in the next few days.”

“Maria will continue to threaten parts of eastern China with heavy rainfall into Thursday as the former super typhoon continues to move inland and weaken. Maria made landfall near the city of Fuzhou on Wednesday morning as a powerful and dangerous typhoon before weakening into a tropical storm. Northern Fujian and southern Zhejiang provinces faced the brunt of Maria’s fury.”

“Floods and landslides triggered by monsoon rains have killed at least 50 people in Nepal over the last two weeks, officials have said.”

“Japan’s prime minister, Shinzo Abe, will meet evacuees at on Wednesday at one of the areas worst-hit by record rains as the death toll rose to 179 and thousands remained stranded in shelters.”

“Heavy overnight rain caused flooding and damage to at least 50 houses in Morelia, Michoacán [Mexico], according to state Civil Protection officials. Neighborhoods in the north of the city, especially those located close to the foothills of Cerro del Quinceo — including Ciudad Jardin, Solidaridad and Presa de los Reyes — bore the brunt of the damage.”

“Temperatures at California’s Disneyland hit a whopping 114F (45C) on Friday, the hottest day ever recorded at the popular family attraction… A number of outdoor attractions were closed due to the heat, including Big Thunder Mountain Railroad, according to Theme Park Insider.”

“On Monday evening in southern Arizona, cars and trucks disappeared from the usually well-trafficked Interstate 8 highway. A massive dust storm, known as a haboob, smothered the road and surrounding region in a thick cloud of desert dust.”

“More than 182,000 acres of land have been scorched by Colorado wildfire this season and the damage is taking a toll on wildlife. On Tuesday, fire officials said food sources for multiple species, including black bears, has been burned.”

“Four tornado touch downs have been confirmed after severe weather swept through parts of Alberta and Saskatchewan once again on Tuesday. That’s after two confirmed tornadoes were reported in Saskatchewan on Monday. Tennis ball sized hail also left its mark on the region with another round of severe weather on the table for Wednesday.”

“While Beryl, downgraded from a tropical storm to merely a low pressure system, failed to directly strike the island, heavy rains brought power outages and flooding to areas still reeling from last year’s hurricanes — an ominous sign given the likelihood of far worse storms to come. Around 47,000 people lost power in Puerto Rico at one point during Beryl’s onslaught on Monday…”