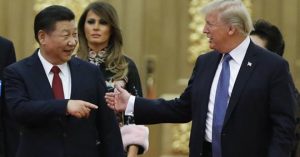 “If there were any remaining doubt that the rising war of words over trade between the US and its big trading partners would break out into substantive conflict, the past week has dispelled it.

“Donald Trump, having brought in tariffs on imports of steel and aluminium, including on allies such as the EU, Mexico and Canada, imposed US levies on $34bn of goods from China and threatened much more to come.

“Beijing, predictably, immediately retaliated with tariffs of its own. Its sense of self-esteem and the economic nationalism underlying the industrial strategy of Xi Jinping, China’s president, could not allow otherwise.

“…this is not a normal trade conflict. Not only are the US president’s goals hard to square with any kind of normal commercial relationship but his chosen means of achieving them are erratic and contradictory.

“The sort of carefully calibrated tit-for-tat of previous trade conflicts, such as Brussels’ threats to retaliate against George W Bush’s steel tariffs in 2002, are unlikely to be met with a predictable reaction from Washington.

“…on occasion, Mr Trump’s rhetoric has lurched from extreme protectionist to radical free-trader. A case in point: he proposed, at a meeting in Canada, that G7 countries reduce all tariffs against each other to zero.

“It is, however, possible to discern a few clear lines from Mr Trump’s statements and actions. He wants to repatriate a significant chunk of existing international supply chains in manufacturing, particularly in goods such as steel and cars, to the US…

“The EU and China will be under pressure to respond…

“Mr Trump, regrettably, is serious about tariffs. His trading partners have an unenviable task trying to guess his likely reaction. One thing is clear, however: the standard field manual from previous cases of trade war may be of limited use in the escalating conflict they now face.”

“…as we have seen, the sustainability of global growth depends largely on the US and China. Obviously, if these two economic giants are going to start trading blows with tit-for-tat tariffs, both will lose – and so will the world economy.”

“UK house prices should be frozen for five years to help prevent another financial crisis, the think tank IPPR has said. The group has urged the Bank of England to freeze property prices under a separate new inflation target…”

“A sense of unease hangs heavy. “Theresa May is respected in Europe,” one contact told me. “But so many times since this Brexit process began, we’ve had to ask ourselves: will she stay or will she go? And now here we are again.” Political uncertainty in Britain makes the possibility of a no-deal Brexit seem far more likely in the eyes of Brussels bureaucrats.”

“Eurodollars, which are hyper-sensitive to the expected path of Federal Reserve rate increases, now signal that central bankers will have to stop raising interest rates in late 2019 or early 2020, with the benchmark well short of 3.375 percent, which officials have projected by the end of 2020.

“That’s in stark contrast to what eurodollars indicated in mid-May, at the peak of the bond market sell-off. At that point, the slope of the curve was firmly positive through 2021, and even then, further gradual Fed tightening was priced in for the years to come. Fed funds futures contracts themselves tell a similar story.

“All this confirms the sobering reality that the U.S. is fast approaching the end of its drawn-out economic expansion. Intuitively, investors know this.”

“Since 2014, hundreds of thousands of Central American men, women, and children, mostly from Guatemala, Honduras, and El Salvador, have fled their homes. Driven by violence, extortion, poverty, and a drought that has decimated subsistence farming, and pulled by family connections and the hope of safe haven, they mostly head north… On the campaign trail, Lopez Obrador promised to loosen Peña Nieto’s southern border defense, refusing to “continue the dirty work” of the United States by detaining Central American migrants who are fleeing violence [into Mexico].”

“The Chinese Government faces a difficult dilemma — sacrifice some economic growth in the short term, or risk a debt-induced financial crisis down the track.”

“The term “credit crunch” has been seen regularly in many analyst notes.”

“South Africa’s public finances are moving in the wrong direction as the country is spending an increasing proportion of its budget on wages and servicing debt, a Treasury official has warned.”

“Saudi Crown Prince Mohammed bin Salman… is struggling to turn the country’s financial fortunes around, with the economy suffering a crisis of confidence. Hit hard by the oil-price collapse, the kingdom is now experiencing a plunge in foreign investment and high levels of capital outflow… As of April, more than 800,000 [foreign workers] had left the country since late 2016, alarming domestic companies concerned that the foreigners cannot be easily replaced.”

“”This trend of wageless growth in the face of a rise in employment highlights the structural changes in our economies that the global crisis has deepened, and it underlines the urgent need for countries to help workers, especially the low-skilled,” OECD Secretary-General Ángel Gurría said in a statement accompanying the wage report…

“”Inclusive growth” seems to be one thing the global economy isn’t seeing these days. An analysis of the OECD’s data, carried out by The Guardian, found income among the top one per cent of earners grew about four times as fast as the median income. The OECD calls this a “long-standing trend.””