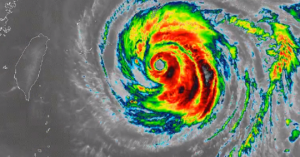 “Schools and offices across Taiwan have been ordered to close and hundreds of flights have been cancelled as the island braces for a powerful and life-threatening typhoon.

“Soldiers are on standby amid fears of landslides and flash floods as Super Typhoon Maria bears down with 130mph winds and torrential rain.

“The Central Weather Bureau said the north and east of Taiwan would bear the brunt of the storm, expected to make landfall at 5pm local time (9am GMT)…

“On Sunday Maria reached Category 5, meaning sustained winds of more than 157mph, before being downgraded to Category 4 on Monday.

“The storm is also on course to lash Japan’s Ryukyu Islands before barrelling into China, south of Shanghai, on Wednesday.”

“The death toll in flooding and landslides in 12 prefectures in western Japan has risen to 157, with at least 80 more people missing and rescue teams combing through shattered towns in search of survivors… The town of Umaji, in Kochi Prefecture, recorded more than 47 inches of rain in the space of 72 hours.”

“Fascinating maps have revealed the true scale of ‘one of the most intense heat events ever seen’ on Earth, showing how cities across the Northern Hemisphere witnessed extreme temperatures in the past week, with records breaking in North America, Europe, the Middle East, and Western Asia. Nebraska-based meteorologist Nick Humphrey, who runs the ‘Ocean’s Wrath’ blog, said the extreme spell of hot weather shown in the maps amounted to ‘a true roasting’.”

“On Friday, record temperatures were set across southern Saskatchewan. Val Marie set a temperature record of 39.3 C, breaking a record set in 2007. Meanwhile, Mankota set a record of 38.4 C. As a result of the extreme heat, health agencies across the province are advising people to stay hydrated and take frequent breaks.”

“Five weeks after historic Ellicott City, Maryland, was flooded for the second time in two years, the National Weather Service office in Sterling, Virginia, has completed its first comprehensive review of the astonishing rainfall totals causing it… In 15 minutes between 4:06 and 4:21 p.m., an astonishing 1.44 inches was recorded; more than half an inch falling in just five minutes within that time span.”

“Puerto Rico and the U.S. Virgin Islands were hit by power outages and widespread flooding Monday as remnants of the Atlantic season’s first hurricane provided an initial test of how far they have recovered from last year’s devastating storms.”

“The Icelandic weather continues to be bad as Iceland experiences its greyest and wettest summer since 1914. Icelandic meteorologist Trausti Jónsson blames the UK heatwave for Iceland’s unusually grey and cold summer… the high pressure system over western Europe is changing the jet stream and pushing clouds over the north of the continent. As a result, “the people of Reykjavík are paying for the sunshine in England and southern Scandinavia,” Jonsson explains.”