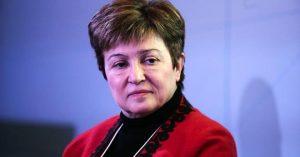 ““After a decade of low interest rates, the corporate and public debt in many places has ballooned to a staggering $164 trillion,” Kristalina Georgieva, chief executive officer of the World Bank, said in an interview in Singapore on Monday with Bloomberg Television’s David Ingles and Haidi Lun. “With interest rates going up, that attention on debt sustainability has to be stronger.”

“Central banks across the world are under pressure to follow a Federal Reserve that’s raising interest rates faster than initially anticipated, putting particular stress on emerging markets and developing economies. The need for structural policy changes, including responses to waves of anti-globalization, remains great as policy makers in most economies haven’t taken sufficient action during the extended period of low borrowing costs, Georgieva said…”

“World debt, including household debt, ballooned to $237 trillion in the fourth quarter of 2017, according to calculations by the Washington-based Institute for International Finance. That’s more than $70 trillion higher than a decade ago.”

“The way the politicians and central bankers are mishandling this is a guarantee of a recession and stock market panic “that no one could foresee.” They have to be different each time; otherwise, they would not occur. It will be glibly termed a “Black Swan” event, an external shock that no model could predict…”

“A big tussle is taking place within China that the leveling of tariffs by Washington and Beijing can only aggravate. That struggle is the effort by China to slow credit significantly: Enough to squeeze the shadow banking industry and rein in debt at state-run firms, but not so much that it causes a slump in overall growth. Getting the balance right is tricky. Few countries manage to pull off soft landings, and trade conflict makes the task even trickier.”

“China’s Ministry of Commerce announced Friday it would place tariffs on U.S. goods, saying it was forced to respond to the U.S. launching “the largest trade war in economic history” by putting duties on Chinese goods. “Technically speaking, we are in a ‘trade war’ as we now have actual tariffs being imposed, with retaliatory responses,” Michael Englund, chief economist at Action Economics, told CNBC.”

“Investors have withdrawn funds from emerging and European markets over the past two months, with the negative impact of fears over a trade war, experts at Bank of America Merrill Lynch said.”

“Brexit Secretary David Davis, who has been leading UK negotiations to leave the EU, has resigned from government. In his resignation letter, Mr Davis criticised the PM’s Brexit plan… saying it would leave Parliament with “at best a weak negotiating position”… The resignation is a blow to Mrs May as she seeks to win over Eurosceptic MPs to her proposed Brexit vision.”

“Britain is on track this year for its most sluggish growth since the financial crisis, with business confidence on the slide, according to the British Chambers of Commerce.”

“A widely watched measure of eurozone capital flows suggests that Italy’s debts to the European Central Bank are set to hit €500bn this summer, reflecting the eurozone’s persistent financial imbalances… The issue of eurozone cohesion will come to the fore once more this autumn when Italy’s new populist Eurosceptic coalition government sets out its spending plans.”

“Lebanon requires “an immediate and substantial” fiscal adjustment to improve the sustainability of public debt that stood at more than 150 percent of gross domestic product (GDP) at the end of 2017, the IMF executive board said in late June.”

“Pakistan’s next government, to be chosen in a July 25 election, faces growing fears of a balance of payments crisis with speculation it will have to seek its second IMF bailout in five years, analysts say. The central bank is running down its foreign reserves and devaluing the currency in a bid to bridge a yawning trade deficit, and the winners of the July 25 election will have “limited time” to act, Fitch ratings agency said on July 2. Together, the economic challenges are “horrendous”, said Dr Ashfaq Hassan, an analyst and former financial advisor to Pakistan government.”

““Cash-strapped South Africans are increasingly turning to payday loans as a quick solution for making ends meet if they run out of money before the end of the month, but unfortunately this noose starts tightening rapidly once a deadline is missed. Interest mounts and many consumers have to borrow to pay the interest, leaving the original debt unpaid.””

“U.S. companies are buying back record amounts of stock this year, but their shares aren’t getting the boost they bargained for… But 57% of the more than 350 companies in the S&P 500 that bought back shares so far this year are trailing the index’s 3.2% increase. That is the highest percentage of companies to fall short of the benchmark’s gain since the onset of the financial crisis in 2008…”

“A widening of spreads between yields offered by off-the-run bonds and the newest securities already suggest growing concerns about the market’s liquidity.”