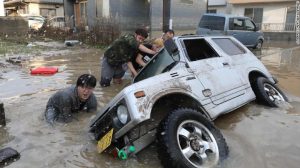 “Rescuers in western Japan dug through mud and rubble on Monday, racing to find survivors after torrential rains unleashed floods and landslides that killed more than 100 people, with dozens missing.

“Prime minister Shinzo Abe cancelled an overseas trip because of the disaster, a ruling party source said. The trip would have taken him to Belgium, France, Saudi Arabia and Egypt from Wednesday.

“Rain tapered off across the region battered by the downpour, revealing blue skies and scorching sun forecast to push temperatures above 30 degrees, fuelling fears of heatstroke in areas cut off from power or water.

““We cannot take baths, the toilet doesn’t work and our food stockpile is running low,” said Yumeko Matsui, whose home in the city of Mihara has been without water since Saturday…”

“A fierce typhoon is headed in the direction of Taiwan, spurring warnings over extreme weather that risks shuttering schools, businesses and the stock exchange… Maria, with sustained winds of up to 198 kilometers per hour (124 miles per hour) and gusts of up to 245 kilometers per hour, was categorized as a super typhoon by the U.S. Joint Typhoon Warning Center.”

“It has now been confirmed that, on Wednesday, the Georgian capital city of Tbilisi recorded its hottest temperature ever as the city reached 40.5°C.”

A nice summary of our record-breaking global heatwave:

“A long spell of hot, humid weather had the ocean off the southeastern North Carolina coast feeling more like bathwater.”

“Tropical Storm Chris, the third named storm of this season, is forecast to become a hurricane by Monday, according to the National Hurricane Center… Chris formed off the coast of North Carolina on Friday and is currently about 160 miles off the coast of Cape Hatteras.”

“Lake Powell, the largest reservoir for Colorado and other Upper Basin states, is 26 feet below its level compared with the same time last year. Due to terrible snowpack, more water is going out of the reservoir at this point of the year than flowing in…”

“Wildfires ignited and rapidly grew in Southern California to close out the past week as some locations endured their highest temperatures in recorded history. The latest destructive fire is the Holiday Fire which broke out in a building in the city of Goleta, northwest of Los Angeles, on Friday night.”

“Indigenous Sami herders and fishermen say the plan to dump the mine’s tailings in the fjord, while less damaging than piling them on land, would destroy spawning grounds for cod and the mine would damage summer pasture grounds and frighten the reindeer.”

“In a town in New South Wales, the drought has become so desperate that farmers are turning to their new local swimming pool for water supply.”