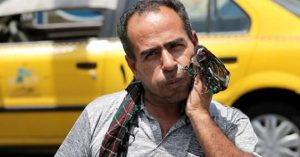 Iran and the Caucasus sizzling under an unprecedented heatwave:

“An intense heat wave is shattering temperature records in Iran and the Caucasus nations of Azerbaijan, Armenia, and Georgia, causing power shortages that are adding to discomfort in the region.

“Weather experts on July 6 said the heat wave is the result of a high-pressure dome or heat dome that formed over the Eurasian region and reaches as far north as southern Russia, where temperatures hit a record high for June on June 28.

“In the Georgian capital, Tbilisi, temperatures soared to a record of 41 degrees Celsius on July 4, contributing to unhealthy air pollution levels reported by the National Environmental Agency.

“Earlier in the week, on July 1, temperatures hit a record 43 degrees in the Azerbaijani capital of Baku, prompting heavy use of air-conditioning that the government said caused an explosion at a hydroelectric power plant and a nationwide power outage…

“A sudden flooding of the river Nenska in the village of Tchuberi in Svaneti region has cut the village off from the rest of Georgia, as all five bridges have been destroyed, infrastructure has been heavily damaged and many of the houses are in water.”

“It’s the second time in two months that major wildfires have lit up northeast Russia. The latest round is clearly visible on satellite images, which show smoke spreading over an area roughly 1,250 miles (2011 kilometers) wide. The scope of the smoke dwarves the County Fire currently raging in California.”

“Three people were found dead near rain-swollen rivers in Japan on Friday (July 6), officials said, as record downpours prompted the authorities to order more than 210,000 people to evacuate their homes, with some areas hit by more than a metre of rainfall.”

“Nearly 60 wildfires burn across 11 states in the West, with firefighters struggling to control the flames. Now extreme temperatures are moving in, creating dangerous conditions.”

“The official term for the hellish meteorological event that hit La Veta is a “firestorm,” a self-propelling explosion of flame generated by strong and gusty winds from a particularly intense fire over extremely dry terrain. When a fire gets hot enough, it can generate its own weather conditions and wind speeds can approach hurricane force, drying out the surrounding land.”

“Parts of Pittsburgh’s roads turned into rushing rivers on Thursday, leaving drivers stranded and forcing evacuations. Thousands are without power in the sweltering heat with a possibility of more rain to come.”

“With another 90-plus degree today, Syracuse is off to its hottest early July in 107 years.”

“Officials confirmed at least 33 deaths in Quebec as the Canadian province was left sweltering in the heat wave for days, according to the Associated Press. In Montreal, a maximum temperature of 97.9 degrees Fahrenheit was recorded Monday, marking a new all-time high for the city since records began 147 years ago.”

“Euronext wheat extended a rally on Thursday to its highest in over a month as latest crop estimates reinforced concern about deteriorating prospects for this summer’s harvest in Europe.”

“Turned-off Scots are failing to sizzle in the bedroom — because of the heatwave. Experts claim clammy couples are facing a sex drought as temperatures reach up to 33°C.”

“Crisp manufacturers nationwide could be in danger of running out of potato supplies if the drought weather conditions continue, one of Ireland’s leading crisp and potato producer has warned.”

“The southwest region of France was hit on Wednesday by violent winds and hailstorms that caused extensive damage to structures and cars — and left one person dead and dozens injured.”

“While the south coast experienced one of the driest first six months of the year on record, the north eastern interior of the Eastern Cape experienced some record high figures, the Port Elizabeth office of the South African Weather Service said on Friday.”

“If you are planning to go to Walvis Bay in Namibia on Thursday‚ be warned of very high temperatures and stand storms.”