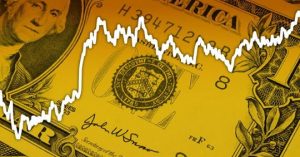 “Financial crises start under blue skies, as investors in emerging markets know too well. They lead rather than follow business recessions. Ultimately, they are caused by a sharp tightening of liquidity conditions and collapsing investors’ risk appetite.

“Arguably, the most important price to watch in financial markets for an early-warning sign is the price of the dominant economy’s debt. This is best measured from the US interest rate term structure, which is popularly summarised by the slope of the yield curve between the yields on 10-year US Treasuries and the Federal Reserve’s short-term policy rates…

“…it is popularly argued that, by reducing the effective supply of “safe” assets, the QE policies of central banks have distorted the term structure by narrowing term premia.

“However, this leaves aside the more important fact that to purchase these bonds, central banks must simultaneously inject liquidity into financial markets. This, by definition, reduces systemic risks, loosens leverage constraints and, by encouraging more risk-seeking activity, reduces the need for “safe” assets.

“The bottom line is that far from lowering yields and term premia, these QE policies actually raise them. In other words, the stark collapse back from their decade highs in worldwide bond term premia at these longer-dated maturities is not a distortion caused by overly-generous QE, but may instead reflect an unambiguous and growing demand for safety by the key investors.

“Thus, the 10-year/5-year yield spread, in particular, has been fast-narrowing in the US, UK and Europe. It is this second, “flatter” and longer-dated yield curve that we should take very seriously as a warning sign of falling liquidity, heightened systemic risk and the threat of an upcoming financial crisis. And, it is now flashing red for both emerging and developed market investors.”

“The US is now behaving in ways that could all too easily lead to a breakdown of the whole trading system and a drastic, disruptive reduction in world trade. Yet, Trump appears to believe that the whole world will bow down to US economic power and his deal-making prowess.”

“Even before a round of U.S. tariffs levied on China comes into force Friday, there are signs that global trade is already cooling. Business surveys published this week show that global export growth, strong in 2017, has slowed to a relative crawl—helping to drive sharp stock-market falls in big exporting nations like South Korea and Japan.”

“Tit-for-tat sanctions between the major economic powers put the global trading system at “potentially large risk”, the WTO said in its most damning assessment yet of the tariff war sparked by Donald Trump’s levies on imports of steel and aluminium.”

“German Chancellor Angela Merkel raised the specter of the global financial crisis as she warned of potential fallout from a trade war with the U.S., saying tariffs on European cars would be “much more serious” than levies on steel and aluminum.”

“World trade has decelerated sharply. This ill omen portends severe risks in the months to come. The greatest risks are in the eurozone – where Italy is the fault line along which the most acute vulnerabilities lie… Already, Italian GDP growth is slowing and forecasts for the 2018 have are down to just above a 1 percent annual growth rate. Even these forecasts may prove too optimistic.”

“The UK had the weakest wage growth of any G7 country over the past decade, according to the OECD… Across all 34 OECD countries, only Greece and Mexico have performed worse in terms of wages.”

“It’s becoming a common story across America: the opening of an Amazon ‘fulfilment center’ hastens the end of local department stores, like this Sears in Sacramento.”

“Donald Trump considered invading Venezuela, a senior US administration official has said. In a meeting last August to discuss sanctions on Venezuela in the Oval Office, Mr Trump asked why he could not just invade the country.

“Months later, Mr Trump was briefed not to mention the topic at a private dinner with leaders from four Latin American allies, but the first thing the president said was “my staff told me not to say this” – stunning his advisers at the time.”

“The government in Iran has gagged bitcoin exchanges across the country, claim bitcoin users and alternate coin community of the Islamic state. The government has been censoring its citizens from engaging in crypto-economy, to apparently counter the fresh round of economic sanctions that the US government is looking to impose later in August this year.”

“In the wider sense, the post election period Turkish economy remains on the edge as the administration has yet to name the economy management team. The current account deficit at 6.4 percent of GDP and Turkey’s huge external financing requirement at 237 billion dollars for the next 12 months is the Achilles Heel. The combination of an economic contraction in the third quarter and recession afterwards with double digit high inflation translates into stagflation; a phase in the Turkish economy good enough to shy investors further away given the global financial conditions…”