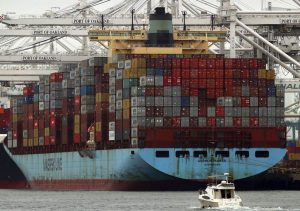 “China has said it is “fully prepared” for a trade war with the US, with little sign of an end to mounting tensions between the world’s two biggest economies.

“Hopes are dwindling that Washington and Beijing will find an amicable solution before Friday, when the US is due to start charging tariffs on $34bn (£26bn) of Chinese goods, with Beijing declaring they will retaliate in kind. The ramifications will likely be felt far beyond the borders of the two nations.

“Tensions have been simmering for weeks, amid a flurry of smaller tit-for-tat measures…”

“A full-scale trade war would likely be as devastating for the world economy as the 2008-2009 recession, warned France’s Council of Economic Advisors, a body which gives input to the country’s prime minister.”

“The European Central Bank raised its purchases of government bonds in June to their highest level this year to keep its stimulus program rolling even as chunks of its other assets expired, data showed on Tuesday.”

“Members of the Bank of England’s top financial stability body have expressed concerns that UK banks’ capital buffers may not be adequate in the face of riskier lending and increasing dangers to the global financial system.”

“UK adults are hiding more than £69bn of debt from their partners, with 8.3 million people having debts their other half knows nothing about, according to new research. The average hidden debt in the UK is £8,293, and almost half a million people wouldn’t have started a relationship with their current partner if they had been aware of their financial position, a survey found.”

“As [Australia’s] credit card balance heads towards $50 billion, the corporate regulator has warned that tighter rules are needed over who can get one with almost one-in-five card holders already struggling to cope with their debt.”

“Household credit has ballooned to unprecedented levels in Canada, as in many other developed countries, amid historically low interest rates. That hasn’t posed too many difficulties so far, because the economy and the labour market have generated solid growth, allowing people to handle servicing costs. But with the Bank of Canada intent on raising rates and the U.S. and Canada engaged in a tit-for-tat tariff fight, that could change.”

“[US] Auto loan interest rates are expected to climb to their highest level since 2009 for the second month in a row in June.”

“The difference between two-year and 10-year Treasury yields dipped below 30 basis points on Tuesday for the first time since August 2007, as trade tensions continue to bolster US government bond prices… The measure is seen as a harbinger of future financial stress.”

“… the effects of the U.S. deficit go beyond the United States. Thanks to the dollar’s outsize global role, the first casualties of a somewhat irresponsible U.S. fiscal policy are likely to be emerging economies that have used the dollar to denominate their debts, not the United States itself. A stronger dollar and rising U.S. interest rates are increasing the burden of paying all dollar-denominated debts around the world.”

“Egypt kicked off its three-year $12 billion loan programme in late 2016, agreeing to tough reforms such as deep cuts to energy subsidies, new taxes, and a floated currency in a bid to draw back investors who fled after its 2011 uprising.”

“…both pillars of [Iran’s] President Rouhani’s economic plan ultimately collapsed: with the arrest of his brother in July 2017, he was forced to come to terms with the GIR; and with the U.S. withdrawal from the nuclear deal in May 2018, economic sanctions were re-imposed on the Islamic Republic. Therefore, Rouhani had no preparations for the situation he is facing now. That is why there is a growing pressure on him, making some analysts predict that he may not finish his term.”

“China’s central bank is caught in a bind, as it seeks to tighten monetary policy for some parts of the economy while loosening it for others.

“Already engaged in the mammoth task of wringing bad debts out of China’s $40 trillion-plus financial system, the People’s Bank of China is now attempting to achieve that while simultaneously being asked to bolster flagging growth and rescue falling stock markets.

“That would be a tough enough feat for any central banker, but the outlook for PBOC Governor Yi Gang just a few months into his new job is even more complicated: A growing trade war with the Trump administration coupled with rising borrowing costs in the U.S. has prompted investors to sell the yuan heavily, raising the prospect of the central bank having to defend it.”

“…climate vulnerability has already raised the average cost of debt in a sample of developing countries by 117 basis points. The researchers estimate that these additional interest costs are set to rise to between $146bn and $168bn over the next decade, and could exacerbate the economic challenges already faced by poor countries around the world.”