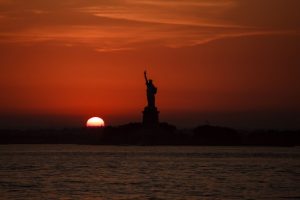 “From the normally mild summer climes of Ireland, Scotland and Canada to the scorching Middle East, numerous locations in the Northern Hemisphere have witnessed their hottest weather ever recorded over the past week.

“Large areas of heat pressure or heat domes scattered around the hemisphere led to the sweltering temperatures.

“The oppressive heat wave that has been baking the eastern United States and southern Canada since the end of June has not only shattered temperature records, but has also turned deadly.”

“Large swaths of the United States are expecting scorching temperatures and humidity that are expected to last until after the Fourth of July celebrations, when America celebrates its independence as a nation.”

“A warming climate is putting tens of thousands of residents living in Huaraz, Peru, in peril from possible outburst flooding. Researchers say a massive chunk of ice could fall from glaciers teetering above the city into Lake Palcacocha, which could then propel a 100-foot wall of water and debris into the city that is home to 150,000, the Guardian reported.”

“The village of Kevo in Finland’s northernmost municipality, Utsjoki, lost out by a whisker when it came to setting a heat record this week. The Finnish Meteorological Institute (FMI) says the mercury topped out at 29.5 degrees Celsius on Tuesday… Kevo’s average temperature in July is 13 degrees.”

“A sunset resembling a blazing rainbow has been captured in the skies above Scotland.”

“[Ireland’s] Cattle prices have taken a serious hit in the marts and factories this week as farmers with parched fields and tight grass supplies continue to offload stock. The continuing drought is causing severe problems for both livestock farmers and cereal growers, and there is little chance of respite as Met Éireann has forecast another week of searing temperatures.”

“Firefighters have warned they’re being ‘pushed to the limit’ as wildfires continue to break out across the UK with the prolonged heatwave turning parts of the country into a tinderbox.”

“[Denmark’s] Farmers are having difficulty getting enough food for their animals because of the recent hot, dry summer weather. The drought is causing a shortage of hay and suitable grain, reports DR Nyheder… “We’ve not had such a water deficit as we have now since 1970,” said Troels Toft, the sector director for plants at the agricultural scientific centre Seges.”

“European farmers cooperatives Copa and Cogeca cut their forecasts for the EU’s 2018 grain and oilseed harvests today, forecasting a 6% drop production due to extreme weather conditions.”

“Storms and torrential rain have caused big problems in the northern province of Trentino, especially in the Fassa and Fiemme valleys [of Italy]. The worst-hit town was Moena, where the streets became torrents and violent shower of hailstones covered the area.”

“Heavy rains have triggered flash flooding in eastern and central Romania. More than 750 people have been rescued from the flood waters and at least five people have been reported dead. The flood damage spans across more than two-thirds of the country and has impacted approximately 300 towns and villages.”

“The leader of Crimea has turned to Moscow for financial assistance amidst a drought-induced state of emergency in several agricultural regions and $1 million in damage from a recent hailstorm.”

“Drought in the southern Russian regions of Rostov, Stavropol, and Volgograd coupled with extreme cold in Ural and Siberia, is threatening this year’s grain harvest, Vedomosti daily reports citing outlooks of several independent market watchers and the US Department of Agriculture.”

“Officials say the death toll from two days of heavy monsoon rains in eastern Pakistan has risen to 15. The heaviest rains seen in Lahore since 1980 continued into Wednesday, flooding streets and causing some residents to join small demonstrations against local authorities. Rescue officials and police confirmed the death toll, saying most deaths were caused by electrocution and homes caving in.”

““As per the rainfall recorded on Tuesday, Shimla [India] witnessed 118.6 mm rain during the last 24 hours. This is the highest rainfall in the city in a day in the last 68 years as per the data available with our department since 1951,” Manmohan Singh, Director of local MeT office, said.”

“Earlier on Tuesday, the Indian Embassy in Kathmandu said that over 1,000 Indian pilgrims have been stranded in Simikot and Hilsa areas due to incessant rain and bad weather.”

“The hazardous event was caused by the ongoing rain that has pelted Sichuan Province since the end of June… Heavy downpours have affected more than 200,000 residents and caused 25,000 people to be relocated, according to Xinhua News.”

“Some 130 people who had been stranded at a hot spring resort in Hokkaido were rescued Wednesday after torrential rains triggered landslides in the area the previous day… Over 200 millimeters of rainfall had been recorded in the city of Asahikawa from Monday through Wednesday morning, and major rivers including the Ishikari and Uryu flooded on Tuesday.”