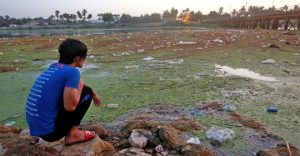 “The rivers of Iraq, above all the Tigris and Euphrates, are drying up. The country is becoming more arid, and desertification is eating into the limited amount of agricultural land.

“Dams built upriver in Turkey, Syria and Iran since the 1970s have reduced the flow of water that reaches Iraq by as much as half and the situation is about to get worse.

“On 1 July, Turkey will start filling the Ilisu dam on the Tigris and this will cause another decline in the inflows to our country of about 50 per cent,” Hassan Janabi, minister of water resources, told The Independent…

“As Iraq begins to recover from 40 years of wars, its existence is being threatened by the rapidly falling water levels in the two great rivers on which its people depend…

“Iraq was once self-sufficient in food, but now imports 70 per cent of its needs. Locally grown watermelons and tomatoes are for sale beside the road or in the markets, but most of what Iraqis eat comes from Iran or Turkey or is purchased by the government on the world market…”

“Standing on his farm in southern Iraq, Amjad al-Kazaali gazed sorrowfully over fields where rice has been sown for centuries — but which now lie bare for lack of water. For the first time, this season Kazaali has not planted the treasured amber rice local to Diwaniyah province. Facing an unusually harsh drought, the agriculture ministry last month suspended the cultivation of rice, corn and other cereals…”

“An Iranian general has accused Israel of ‘manipulating weather’ to prevent rain over the Islamic republic – aka, stealing the country’s clouds.”

“Authorities in Daykundi [Afghanistan] estimate the number of people who will be affected by the ongoing drought at 267,000 people, more than one third of the population of the whole province.”

“At least six people were killed as heavy downpour lashed different parts of Lahore [Pakistan] in the wee hours of Tuesday, inundating streets and causing flooding.”

“So far, an estimated one million people – in 13 upazilas – have been affected. Eight people have died and infrastructure has been severely damaged. What’s more, Bangladesh is currently in monsoon season which is not due to end till September/October, meaning even more lives are at risk.”

“A section of a community road in southwest China’s Sichuan Province has collapsed, plunging retaining walls to the ground.”

“Asahikawa Airport [Japan] had 134 millimeters of rain over a 24-hour period, surpassing the monthly average for July.”

“Hurricane Fabio is expected to intensify into a major hurricane, the third of the eastern Pacific hurricane season, and has already become the record-earliest “F” storm in that active basin in 2018.”

“There’s no relief in sight for stubborn wildfires flaring all over the Western U.S., including one that began Saturday in northern California that forced the evacuation of hundreds of people northwest of Sacramento.”

“A trade war is taking a heavy toll on Colorado farmers who export more than $2 billion in products each year…[which] comes as the agriculture industry already struggles with drought, a labor shortage and soft commodity prices.”

“The humid air mass coming from Ontario has anchored itself over Southern Quebec, according to a heat warning issued by Environment Canada, and is expected to last another four days. Sunday’s temperatures, with humidex, reached more than 45 C in Montreal and Monday’s are forecast to go up to 44.”

“Scotland has recorded its hottest ever temperature, according to provisional figures from the Met Office. On Thursday 28 June, a temperature of 33.2C degrees was measured in Motherwell, North Lanarkshire. It exceeds the 32.9C recorded in August 2003, at Greycrook in the Borders.”

“Parts of southern England experienced the driest June on record last month, with just 6 per cent of expected rainfall – while it was the hottest June on record for Northern Ireland and Wales, the Met Office revealed today.”

“Wimbledon set to be hottest in 141 years of record-keeping.” [Didn’t we just have our hottest London Marathon on record?]