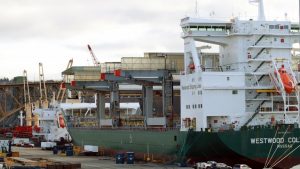 The party’s almost over

Our global economic recovery, overly reliant as it has been on central bank stimulus and unsustainable credit expansion and dependent as it is on an ever depleting and degrading resource-base, always contained the seeds of its own destruction. Protectionism is an inevitable response to underlying, material insufficiency within a competitive system. The party’s over.

“Pour yourself a stiff one, the party’s nearly over. That was the message issued by the International Monetary Fund last week.

“The global economic momentum enjoyed in recent times is set to fade. The deadline? Probably the end of 2019.

“However, even that timeline has been called into question by the global lender of last resort. Risks termed by the fund as “clouds” on the horizon amid “sunshine” are now “closer than we had anticipated”, according to deputy director Mitsuhiro Furusawa…

“China looks more exposed to the impact of worsening trade relations with the US than just a few months ago. Economic data for May came in below expectations, and the slide looks likely to continue in June.”

“Increasing concern about the effect of a possible trade war between the US and China has forced investors in equity funds to head for the exits. Investors pulled $29.7bn from equity funds in the week ended June 27, the second largest weekly outflow since the beginning of the millennium, according to data provider EPFR.”

“A host of large bond funds from companies such as Pictet Asset Management, Pimco and Allianz Global Investors have been butchered in the rout of emerging markets. Plunging returns and large outflows have caused some funds to lose hundreds of millions of dollars, with one AllianzGI fund shrinking by two-thirds this year.

“Overseas investors have pulled out nearly Rs 48,000 crore from Indian capital markets in the first six months of 2018, making it the steepest outflow in a decade, following high crude oil prices and trade war worries.”

“Canada began imposing tariffs Sunday on US$12.6 billion in US goods as retaliation for the Trump administration’s new taxes on steel and aluminium imported to the United States.”

“Corporate America is drunk on easy money. US companies, encouraged by a decade of unbelievably low borrowing costs, are sitting on $6.3 trillion of debt, according to S&P Global Ratings. That sum, which excludes banks, is more than before the Great Recession — or any other time in history.”

“Debt at UK listed companies has soared to hit a record high of £390bn as companies have scrambled to maintain dividend payouts in response to shareholder demand despite weak profitability. UK plc’s net debt has surpassed pre-crisis levels to reach £390.7bn in the 2017-18 financial year, according to analysis from Link Asset Services, which assessed balance sheet data from 440 UK listed companies…

BP and Royal Dutch Shell are among the most heavily indebted companies, accounting for £1 in every £7 of all UK plc’s net debts in the latest financial year.

“Venezuela’s inflation rate has hit a new high, according to university research, with consumer prices in the crisis-ridden country rising by more than 40,000% annually for the first time on record.”