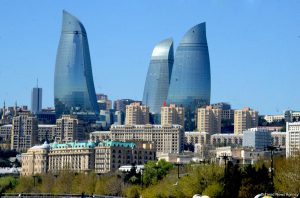 “Hot weather continues to spread across Azerbaijan. The country’s capital city is experiencing its hottest weather in over 120 years.

“Temperature in Baku reached +43-44 ˚C on July 1, according to the Ministry of Ecology and Natural Resources. An abnormal heat is expected in the capital and Absheron peninsula on July 3-4.

“Head of a department at the Ministry of Ecology and Natural Resources Umayra Tagiyeva said earlier that one of the indicators of climate change is the anomalous summer.

““The analysis shows that when comparing the weather in 1961 and 1990, the number of hot air flows has increased significantly. If earlier in the summer three hot airflows were recorded, then over the past 25 years, their number has reached 17,” she said.

“Tagiyeva added that this trend will be observed this year too. The most anomalously hot weather will rule on the territory of the Republic in July and August. At the same time, the heat will be long. The air temperature on some days will exceed the climatic norm by five to six degrees.

“Saudi Arabia’s General Authority for Meteorology and Environmental Protection is forecasting a heatwave in some areas of the kingdom from Tuesday. The organisation said temperatures in the Eastern Province and eastern parts of Riyadh could exceed 48 degrees celsius and dust may affect horizontal vision during the day from Tuesday until the beginning of next week.”

“The death toll in ongoing floods in India’s northeastern state of Assam has risen to 32, officials said Monday. According to officials the flood scenario in the state continues to remain grim.”

“The past month was the second-hottest June on record in China. And to make matters worse, the heat wave isn’t going away anytime soon, with temperatures expected to flirt with 40 C within the next few days in some regions, weather forecasters warned.”

“Torrential rain has disrupted rail and road traffic in southwest China’s Sichuan Province, leading to the cancellation of six trains and closure of more than a dozen highways.”

“Typhoon Prapiroon will bring potentially flooding rain and strong wind to southern Japan and South Korea during the beginning of the week. On Monday morning, local time, Parapiroon strengthened from a severe tropical storm to a cyclone as it approached South Korea.”

“Heavy rains have stalled flights and ferries across South Korea, causing massive flooding in farms and residential areas in some parts of the country. Torrential rain has led to warnings as the country experienced 80mm to 440mm rain per day over the weekend, according to forecasters.”

“Weather officials say the Seattle area got so little rain in the last two months that it broke records at their SeaTac station. May and June were the driest ever measured in SeaTac.”

“Flash floods in Des Moines, Iowa, have claimed the life of Larry Cotlar, a popular longtime sports radio host, according to the Des Moines Police Department… Six to 8 inches of rain fell in a 12-hour period in Polk County and neighboring Story County. One creek just west of downtown Des Moines rose over 15 feet in just 3.5 hours.”

“…heavy torrential rainfall over the weekend, especially over the last 24 hours and yesterday afternoon, caused flash flooding in several areas across Trinidad &Tobago.”

“Record-challenging temperatures were felt across a majority of the Northeast on Sunday, including several bigger cities. Allentown, Pennsylvania, was one of the hottest spots in the region, where the temperature reached a blistering 98 degrees Fahrenheit with a maximum AccuWeather RealFeel Temperature of 105 F.”

“…heavy torrential rainfall over the weekend, especially over the last 24 hours and yesterday afternoon, caused flash flooding in several areas across Trinidad &Tobago.”

“It has been a record-breaking week for heat and sunshine in Ireland.”

“Shocking images have revealed how masses of fish have died on a dry riverbed [in Wales] as a direct result of the heatwave.”

“Britain’s summer heatwave could see lettuces disappear from supermarket shelves across the UK, growers have warned. However, experts say the heat is causing chaos for lettuce producers in the UK, with shortages expected to become apparent in shops within the next fortnight… “The record temperatures have stopped the lettuce crop growing, when the mercury hits 30C lettuces can’t grow.””

“A sandstorm has battered Senegal leaving livestock dead and damaging the newly opened airport. A wall of dust swept across the capital, Dakar…”

“You asked for rain, Cape Town. And you’ve finally received it in bucket loads.”